The greatest showman soundtrack is messed up in Roon. Each song is classified as its own album but not in TIDAL. I have tried fixing it by selecting them all, editing and trying to update the album but no dice. Please advise? Wife approval factor has reached an all time low until I can resolve this. 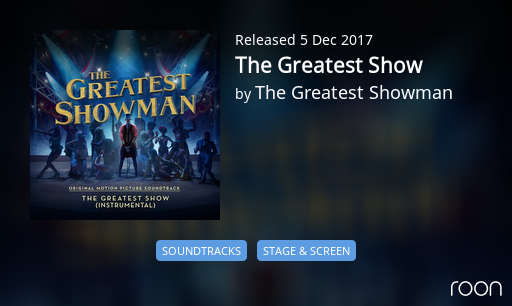 Hey @Jared_Devers — Thanks for sharing your report with us!

Just to clarify, was this album added from TIDAL or is this local media that you imported?

This is an album added from TIDAL - not local media.

The screenshot you shared above is for The Greatest Show, which is also a single in TIDAL. If you go to one of the tracks that is not a single, like the second track A Million Dreams, is it showing on it’s own as well? If so, can you share a screenshot of what you’re seeing there?

It looks like I had favourited it within TIDAL. I have now unfavourited it. https://tidal.com/album/81836184

I still had a big mess in Roon, I then highlighted and removed all songs/albums from my own library. Its all clean.

Then I search again in Roon for “The Greatest Show” . I get

It only has one track. 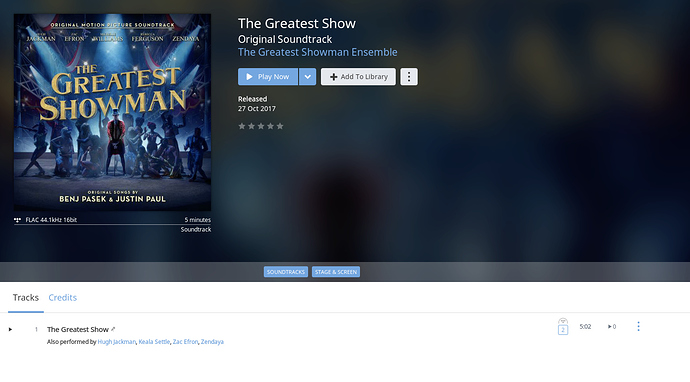 Ok I managed to resolve this by searching exactly for “The Greatest showman (Original Motion Picture Soundtrack)” in Roon so it would precisely match with the right album in TIDAL. Its not very obvious whats wrong here other than lots of messed up tags on albums and songs related to that album.

Unfortunately, TIDAL have really screwed this up. They’ve broken up the album into separate tracks. If you search for “The Greatest Showman” (note: NOT “The Greatest Show”), you’ll see all the results, and the actual album is buried down the list: 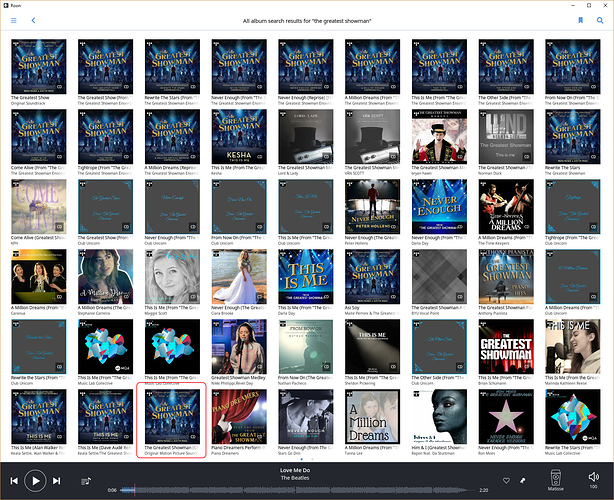 Edit: Ah - you got there before me…

Looks like it - what a mess! But if I search that in Tidal I get the right album first time.

Im finding Roon search a bit average compared with Spotify/TIDAL - its very evident when searching Album names - it has no understanding of popularity of any given search term and prioritising that first. Take “In Rainbows” for example. Radiohead of course should be first.

FYI, we’re aware of the current limitations in search and are working on something (a lot) better.