This would be a wonderful addition, speaking as a Mac user. Seems much more intuitive for adding a local folder for example, then having to type the path.

I though there was one ?

If there is, I profess to having missed it. Any tips?

You seem to be correct. I would have sworn I saw the option yesterday when I was setting up storage because I selected it, browsed to network but the process then halted, so I abandoned that and filled in the path field. There’s certainly no sign of anything like that now, so I’m beginning to wonder just what I saw and what I did

I see this feature already in “Roon Version 1.1 (build 70) stable”, which I believe is the current version, on my Mac.

In the Storage tab of the Settings window, to the right of the label “Watched Folders”, hit the “+Add Folder” button.

In the little window which comes up, hit the “Browse…” button to the right of the “Path” entry field under “Local Folder”.

That was what I saw

Hmm, running RoonServer on Mac Mini. Not showing up for me. 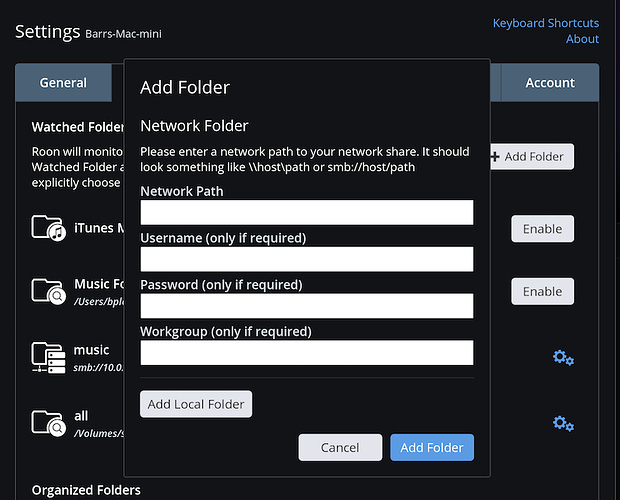 Well, that’s just weird. What you’re seeing looks like a different interface from what I’m seeing: 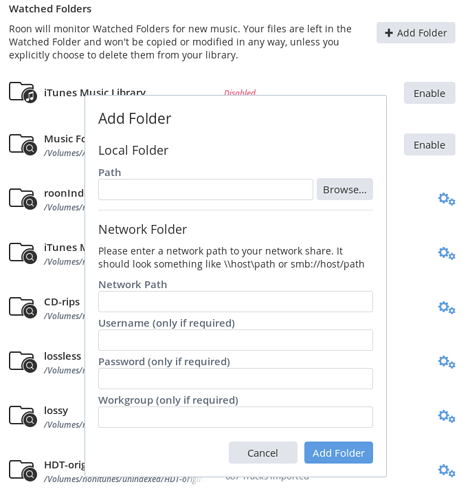 What does the software you’re running say when you click “About”? I note that what I’m running calls itself just “Roon”; is there something else called RoonServer?

The distinction here is Remote vs Core.

If you’re running Roon, you’re directly connected to the computer running your Core. Since we have access to the operating system’s browse functionality, we offer it when you’re adding a new Watched Folder.

Unfortunately, that’s not the case when you’re running as a Remote – in that case, browse would show your local computer, which is no help to the computer on which you’re running your Roon Core

It’s possible we could build something in the Roon interface to browse the Core computer remotely. Let us know if this is important to you, guys. Thanks!

I hadn’t yet caught up with the notion that there’s now a headless RoonServer one could run instead of the full-GUI Roon prrogram. After some naive posting here I went off to look for more info.

What I described above (no browse functionality) would be the case if you’re running any Core + Remote scenario, whether the Core is Roon or RoonServer, or the remote is Mac, PC, Android, or iPad.

Thanks for the clarification. I understand. I think for those running RoonServer, and thus do not have the capability to run the Roon interface and setup on the computer on which it is installed, this would be a nice enhancement one day.

I only ran into the issue because adding the location of the SD card mounted volume was a pita.