Browsing TAGs on Roon Remote is very slow and sluggish

Number of Tracks in Library:
321,000 Tracks, ROONALBUMTAG present in all tracks.

When browsing through my TAGs via Roon Remote running on my Galaxy Tab A tablet, scrolling and artwork display are very slow and stuttering all the time.
Browsing TAGs on the Roon desktop application running on my core PC is running flawlessly, no issues whatsoever.
Is there any optimization I can do on my tablet to improve the browsing experience because right now waiting for scrolling to complete and cover art to pop up is quite a painful experience.

I am attaching a small screen recording to get a better idea of what I am experiencing on my tablet:

This is egg on my face, but just wanted share this information for those who might be making the same mistake. I have all Apple ecosystem except the DIY NUC ROCK. Even after the ROCK upgrade, I wasn’t too happy about sluggish loading and search. My Roon remote is a MacMini attached to the TV (for display) and the stereo system. The MacMini is connected to the subnet through the Airport Extreme router. Just yesterday the Airport was acting up interfering with the subnet communications so I remov…

I am using the Airport Extreme as an access point only, in bridged mode. I am not a fan of Apple products and this is the only Apple device I own, however this has provided me with the most flawless and reliable Wifi experience I ever had in my home. I have tested tens of routers, access points and extenders before getting the Airport Extreme and none could ever come close. Also since the pandemic started I have been working at home every day for more than year and a half and relying heavily on my Wifi for all my work… it has never let me down once…
If Roon Remote is incompatible with Airport Extreme and this is an officially documented problem then I’ll probably have to give up on Roon Remote and stick to other combinations that work perfectly… Both LMS with Orange Squeeze or Squeezer and Asset UPnP with HiFi Cast or Bubble uPnP as remote and working flawlessly so I’ll probably stick to one of those… My Stack Audio Link II streamer supports Roon, LMS and DLNA servers (among others) so it’s good that I have a choice

OK, I’ll arrange to get a different Wifi access point for tests… It’s a Netgear Wifi 6 access point, I hope there are no know issues with that one… Overall I am not keen on paying over 120 euro for a new piece of gear to replace something that works perfectly (usually if it ain’t broken, don’t fix it…) but I am willing to give Roon Remote another chance… especially after I spent time tagging all my files to improve my Roon browsing experience the way I want it…
If this solves the issue and everything else works at least as well as before, then I’ll consider buying a new access point in the near future… I’ll let you know how it works out.

Hi, I have switched now to using a Netgear WAX206 WiFi 6 Dual Band Access Point instead of my old Airport Extreme but unfortunately this hasn’t helped much. Roon Remote is slightly faster now, just like everything else… all apps and devices seem a bit more responsive on the new access point which was a bit expected because the WAX206 should be much more performant, however Roon Remote remains slow and sluggish and the browsing experience is still far from what I have when using other control apps like Emby or Hi-Fi Cast with DLNA servers.
So is there anything else I can try to improve my Roon Remote browsing experience?

OK, no other suggestions here? Isn’t there any way to make Roon Remote behave any faster while browsing the TAGs? My feeling is that fetching albums artwork seems to slow it down quite a bit… it’s much faster to browse albums directly than going trhrough the list of TAGs… artwork loading seems to be quite slower when having large lists of albums grouped under the same album TAG…

Apparently I’m quite stuck with this one

All I can think of is:

Are very much high-resolution images of each transmitted in mega-bit size here?

Is the selection a bit oversized?

Does the remote control have enough power for what Roon offers? Processor and RAM?

The tablet is Samsung Galaxy Tab A 10.1 (2019) with Octa-core (2x1.8 GHz Cortex-A73 & 6x1.6 GHz Cortex-A53) and 2GB RAM, it works perfectly fine with any other application (Hi-Fi Cast, Orange Sqeeze, Sqeezer, Emby) which is fetching similar volumes of data and are reacting very well.

The album images are the ones sent by the roon core. I don’t use high resolution images in my library to avoid slowing down things, but roon is often replacing them with better versions, so those may be bigger.

As for the size of the selection, it ranges from a few hundred albums to a few thousands, depending on the TAG, but again, on other apps same sizes are working perfectly fine on the same device.

Only 2 GB of working memory is intended for beginners without much memory requirements. The screen buildup is described as sluggish on this device.

Quote from the net:

Well I am still within the official specs, so it should not be a problem… I already had to change my access point because apparently the one I had was not recommended and that had no effect, I will not buy a new tablet as long as my current one meets the requirements:

The video also shows that it just works as a minimum requirement. Surely, a high-priced device can work smoother and faster, but you also want to hear more and not just scroll with little RAM.

Hello @Michael_Putz , For the restore to be detected, the folder structure needs to be changed with the RoonBackups folder being the root folder, we believe the backup issue occurs due to the way it is currently structured. We have done some further testing in the QA lab and we have been able to reproduce an issue when using a large number of tags (5-10k and over). Using tags in such a high volume is a rare use case and further optimization would be needed and I am unable to comment on when…

As slowness is specifically related to browsing by TAGs, I am guessing it’s a similar issue here. Browsing albums is fast enough, but browsing by TAGs is painfully slow, so I am suspecting this is a code optimization issue. As mentioned in my first post, I have over 324K tracks in my library and all contain ROONALBUMTAG, so basically they are all tagged. Unfortunately I could not find any other solution than using TAGs in order to be able to browse by album duration… out of the box, roon does not allow that.
Once again, the problem is only specific to the Roon Remote… when browsing by TAGs in the Roon desktop application, all is quite smooth…

Complexity costs power and I wanted something similar for once. I wanted to bring my ratings made in Foobar2000 also to Roon and I looked for a multitagging field for it. It occurred to me to simply create an Additional Genre Rate5, Rate4 etc., easily recognizable and Genre is an evaluation category at the highest fastest level. This would have created little additional load with thousands of genres. In the end I discarded that too because I preferred to get untainted into a metadata representation of Roon that I can review in about 6 days, then hopefully I’m through reading in.

Yes, I also needed my custom TAGs I am using in LMS and Asset uPnP, including RATINGs and a few others, but most important for me is to be able to browse by album duration. I always listen to full albums and pick an album that fits perfectly the available time slot I have for listening. So basically if I have 45 minutes free, I need to be able to browse through my list of 45 minutes albums and pick something to play. Without this possibility, any software is quite useless to me.
The only way I could achieve that in Roon was by calculating album duration for every album (rounded to the next minute) and save it to ROONALBUMTAG. This allows me to filter unplayed albums of 45 minutes imported in the pas month for example, which is exactly what I need, but it seems that from a performance perspective it was not the best idea… 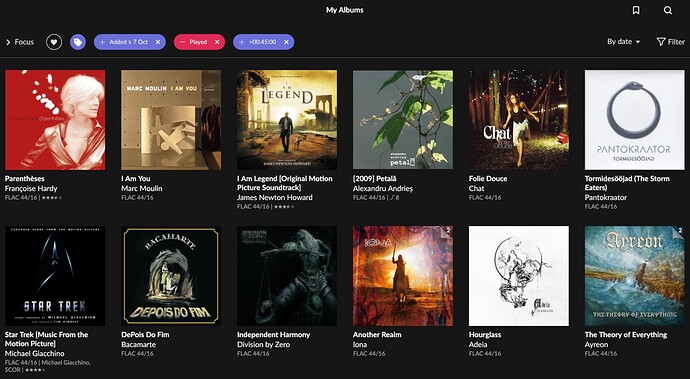 Cool, an intelligent self-made solution approach. I love that, despite all the pain I sometimes inflict on myself. With 300,000 pieces of music, the restart with other ideas would not be so time-consuming, a week could be enough, but what could solve the problem better?

. We want to know what our subscribers are interested in and what their needs are.

All the details you’ve shared have helped us narrow down what you’re experiencing to a known issue: “large” tags are causing slowness issues. For example, we’ve discovered that having about 10,000 items in a tag, the wait time can be as much as 15-20 seconds.

In your case, you mentioned there being 321,000 tracks tagged with ROONALBUMTAG.

In the meantime, an alternative would be adding your tracks to playlists (or genre-based playlists). That should result in visible improvement.

Thanks for the update, I had already read the related posts about performance problems related to large number of TAGs. I think for the time being there is no real alternative for me, creating multiple playlists with tens of thousands of tracks each doesn’t sound very manageable and I would loose the flexibility of combining various focus criteria with TAGs like I am doing now. I hope this issue will be addressed at some point in time to make TAGs a viable alternative for large collections and not just an afterthought.
In the meantime I think using bookmarks to save my frequently used focuses should provide an acceptable solution for the time being, this would avoid browsing the TAGs directly and performance should be less impacted this way.