Bryston BDA-3.14 shows as Roon Ready, Not Certified, and DSD does not play

I just took delivery of a new Bryston BDA-3.14 streamer/DAC today. This is a combo BDP-Pi and BDA-3 DAC. The device shows up correctly in the Audio section of Roon->Settings, but has a red warning triangle saying “Uncertified”. See image below.

I assume this is because the device was only recently released by Bryston, but how will it be certified? Is this something Roon does or that Bryston has to do? Once it is certified, will I need to do anything myself?

Second problem: the device shows as capable of DSD, but when I play my one and only DSF album, I just get white noise. I actually don’t think it can handle DSD over the streaming interface, but I’m not sure. How do I tell Roon to use DoP or just convert to PCM? 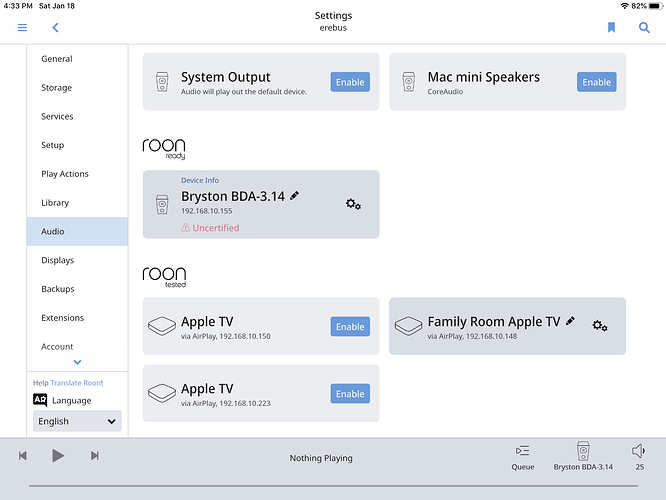 I assume this is because the device was only recently released by Bryston, but how will it be certified? Is this something Roon does or that Bryston has to do? Once it is certified, will I need to do anything myself?

when I play my one and only DSF album, I just get white noise. I actually don’t think it can handle DSD over the streaming interface, but I’m not sure. How do I tell Roon to use DoP or just convert to PCM?

You can set the DSD playback strategy in the DAC’s Device Setup tab. You can access device setup by clicking the “cogwheel” icon next to the Bryston BDA-3.14 in the screenshot you posted.

Where’s the DSD strategy? I don’t see it when I click the cogwheels…I checked under Advanced too, and scrolled up (I can post that screenshot too if you would like). 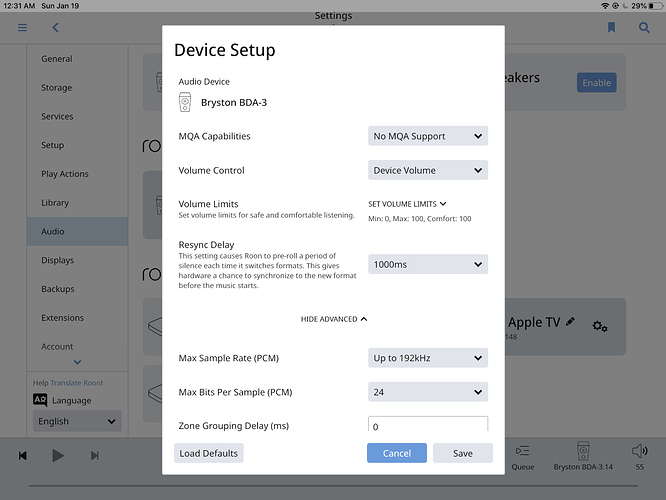 That’s strange - looks like your device is being identified as a Bryston BDA-3. I believe you don’t see the DSD strategy there because the 3.14 is not yet Roon Ready certified, and Roon won’t be able to display DSD options until certification is complete.

I believe the 3.14 uses the 3 as the DAC but adds a Raspberry Pi as the streamer, so that could explain why it’s being seen as a 3.

In any case, it seems this isn’t unexpected…is that correct? This isn’t due to some misconfiguration on my part? If not, then I’ll just wait for certification. All my PCM music, as well as Qobuz, plays just fine.

I just spoke to the hardware team regarding this issue. They have let me know that we don’t currently have a Bryston BDA-3.14 in the lab, so we are unable to comment on current DSD options. We suggest that you reach out directly to Bryston to clarify further.

I have a Bryston BDA-3.14 showing up sometime next week and look forward to it. I assume no certification yet, but that’s not critical for me. Just curious what your impressions are on the DAC/Streamer/Endpoint or any idiosyncrasies you care to pass on.

Correct, it isn’t certified yet. I spoke to someone at Bryston who said they’re working on it.

Roon doesn’t know how to send DSD to it. Nor do I, just yet. I have only one DSD album and I found its PCM version on Qobuz, so I’m not too bothered.

It can be a Roon network streamer or it can use its internal MPD streaming software. It can’t be both simultaneously. You choose which one you want on the home screen of its website/control app. Look at the bottom left for a popup menu. It comes set to MPD initially, so you would need to change to Roon streaming if that’s what you want.

It emits a very slight pop as it changes input sample frequencies. I set Roon DSP to upsample by power of 2, so it switches between 176.4 and 192.

It takes almost a minute to turn on. I leave it on all the time. Bryston told me it’s officially rated at 13W, but depending how it’s configured, it can apparently go as high as 30+W.

Hope that helps. If you have any more questions please ask.

Thanks, very kind of you to share that information.

I do have a few DSD album files I ripped from my handful of SACDs when I had an Oppo 105. But I believe Roon can convert these on the fly to PCM and I bet I would never know. So whenever Bryston/Roon work out the DSD issue isn’t that important to me. I assume the HDMI inputs will do DSD though, and I’m considering an Oppo 203 just to have a disc spinner, though it would mostly collect dust…

I’m new to Roon and enjoying it, so I’ll be using the Bryston as an end point - but I’ll definatley try out the Bryston app as well for kicks.

Anyone aware of any other quality CD/SACD players/transports with HDMI (DSD) outputs?

The pop when switching sampling rates is disappointing coming from Bryston though. I assume they will address this, but odd that it would be released that way.

I started a non-support thread over here a while ago. We might want to take a general discussion there so we don’t notify support with each message we send.

I’m getting a BDA-3.14 next week and hope to set it up as a Roon endpoint. If you have any comments, I’d love to hear them, and if you have any questions, I’ll try to answer them after I get it set up.

I did see that thread - good point, I should have posted there and will in future.

probably its too late or you already solved the DSD playback issues, its a workaround just turn off Dop in roon setting in manic moose then you could play DSD files in 176 PCM due to 3.14 only supports DSD through USB.

@Keith_Cheung: Thank you for that solution!