Just received the brand new integrated amp and started testing. Quite impressed yet. Running with S400 and SE crossovers. 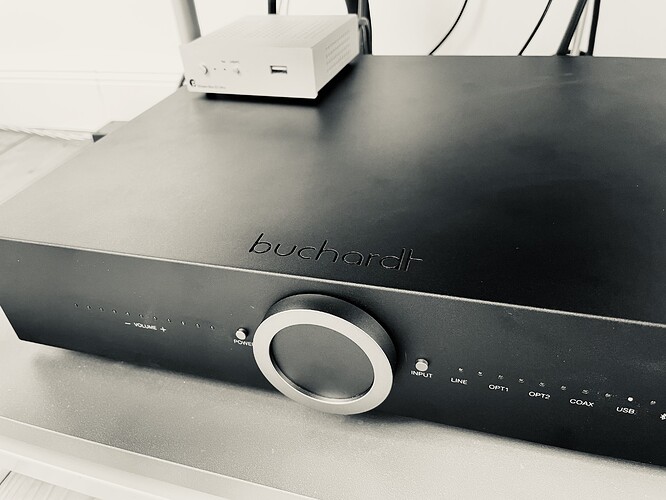 hey Bernd–no one in the US has received this yet. And there is no timeline for delivery (a shipper problem reportedly).

Can you tell us how you are liking the amp? I understand there’s no DSP app yet. And some remotes are not working so well.

Have you had any other early issues? How does it sound with your S400 SE’s?

They shipped here even ahead of the app being ready (though one can use the A series one for room correction, while the UI is a bit awkward), but extended the return period to when it finally is avail.

So standard amp w/o the Buchardt specific features yet. Already great. Crisp and punchy. Detailed. Already a super match with the S(E)400s. Of course it’s Hypex’ class-D inside so not for the tube sound aficionados. Coming off a rather clear AB amp it’s exactly my piece of cake.
Initially there was some issue with the BT remote (lost connectivity) which was quickly solved by a firmware patch.
Design wise you hate or love it. As my previous amp was quite a beauty to me, I struggle a bit. Will get over that

thank you very much Bernd. This is super helpful!

I want to support Mads and love his speakers, but have heard nothing about the I150 other than the birthing problems!

thanks Bernd. that’s great news for us waiting and hoping here in the US

Bernd. Do you still have your I150? Does anyone else?

I’ve had one for several months now. There is still no app for DSP or speaker profiles, and my remote has never worked properly. Even after several replacements and suggested hacks (though one hack did help).

Sound is good, and well matched to the S400’s. No problems in operation. But a huge part of the functionality of the amp was it’s digital room correction and speaker adjustments, none of which have any scheduled or anticipated completion dates from Buchardt as of this morning, 5 months after the release and more than a year after the product announcement…

Yeah. What Buchardt are delivering is a pathetic performance. App development is a nightmare and Buchardt seem completely have lost any control. If they ever had. I even doubt they have any in-house development skills. They keep blaming their 3rd party developer, but this utter failure is their responsibility only.
Communication is another demonstration how unprofessional this company is organised.

The reason I haven’t returned the amp is it really sounds good and I may be too lazy to fold the deal right now. But time is running low.

Given their conduct of business I cannot recommend Buchardt any more. This is not a serious company.

I’m in the same boat. I asked them to start the return process and they suggested I use balled-up tin-foil in their remote control to try to improve the battery contacts!

They have not started the return process but hopefully will keep their word about allowing returns until 45 days after the app is available. After months and months of waiting and no app official launch date, I wonder whether they will ever be able to make these core features of the amp work.

Given their conduct of business I cannot recommend Buchardt any more.

Bernd, and how do you like the S400? I am looking for new speakers, and am interested in user feedback. I am also looking into the Amphion range… Thanks!

Cannot complain. Great speakers. Upgraded mine with the SE crossovers.
Great imaging, neutral to my ears, great and deep bass for its size.
Buchardt just announced an MK 2 version which I would wait for as they seem to address shortcomings(if you will say so) of the first version (higher quality parts on crossover and a paper cone bass driver).

I would be very curious what changes upgrading the crossover brough!?

I just received the Buchardt i150… and curious what users are setting up with Roon…
the device comes up as a Boulder DAC.

I know that with room correction … and no support for MQA … I have set it up as per the attached … any recommendations? 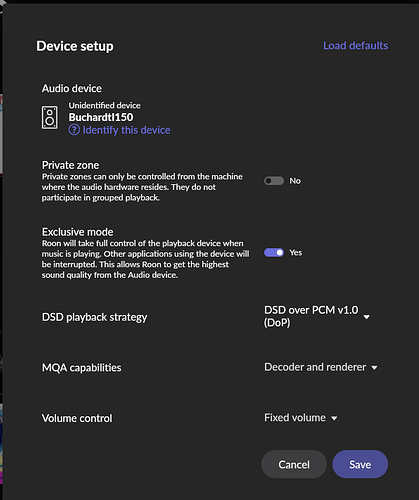 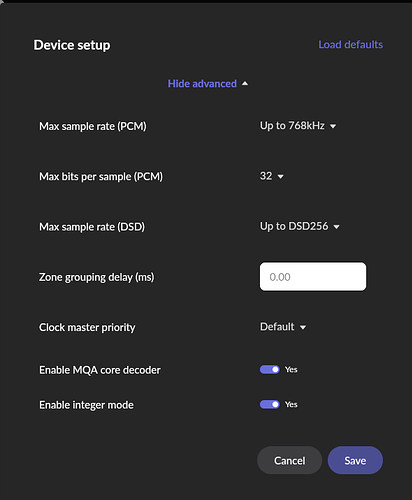 Gorgeous looking piece of kit and congrats! How do you like if so far and what speakers have you paired it with?

Since it does not do MQA, I would disable decoder and renderer. If you are on the Tidal top tier, you can leave MQA core decoder on so you have Roon do the first unfold at least.

What’s your setup / signal path? What streamer to feed the I150?

Thanks… I also picked up the 400 MK II from Buchardt…

From what I understand if the DSP is enabled in the I150 amplifier (Using Room correction, manual EQ etc.), then it is limited to 192Khz… compared to 384Khz on the Hegel and MQA … not a big deal … Im curious if I disable DSP… will the DAC do 384Khz ?..
hope to find out soon

Im using a Audioquest Diamond USB Cable 1.5m with 72V DBS type A-B as my connection from my dedicated Mac Mini.
TIDAL is my Streamer of Choice… I also have Spotify…
I have to say… Im surprised this i150 does not have WIFI capability … and built in streaming capability … then again I personally wont need it

From what I understand if the DSP is enabled in the I150 amplifier (Using Room correction, manual EQ etc.), then it is limited to 192Khz

That’s what Mads Buchardt told me in an email exchange I had with him last week. The chipset is limited to 24/192 if you enable DSP.

I had actually enquired about how the analog input signal is processed by the amp if a turntable is added.

Very curious to hear your feedback on the i150 and S400 MK2 after you get to give them a listen. The S400 MK2 will be replacing my LS50 Meta very soon.

This should be the least of your worries. It’s always easy to add an inexpensive Roon ready streamer to the amp.

Roon ready streamer to the amp.

what would you recommend that has USB output ?
thanks