I have noticed another bug since version 778. I initially thought this might be the same issue as that other bug I reported regarding “Main Albums” and “Appearances”. But I dont think it is and to explain I use an example where there only is one “Main Artist” and no further appearances.

I have 4 recordings of the Complete Etudes (published in 3 books) for piano by György Ligeti.

They can be found circeled in attached screenshot: 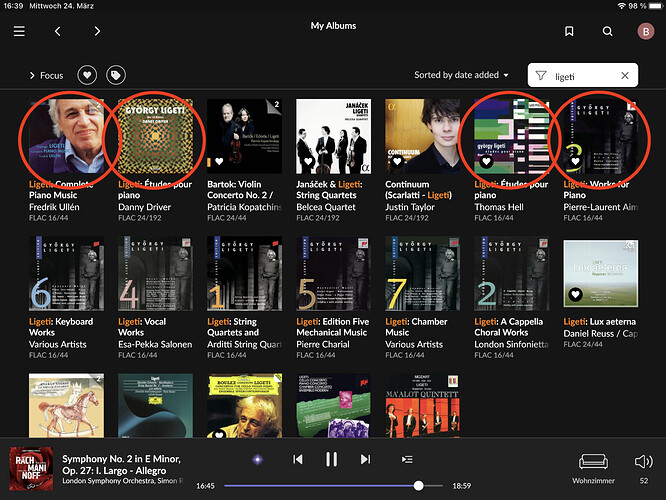 However, If I look at the library Icon (screenshot taken from Danny DIver’s Album) on any of those albums, It gives me a album count of just 2. Those are Frederik Ullén and Pierre-Laurent Aimard. 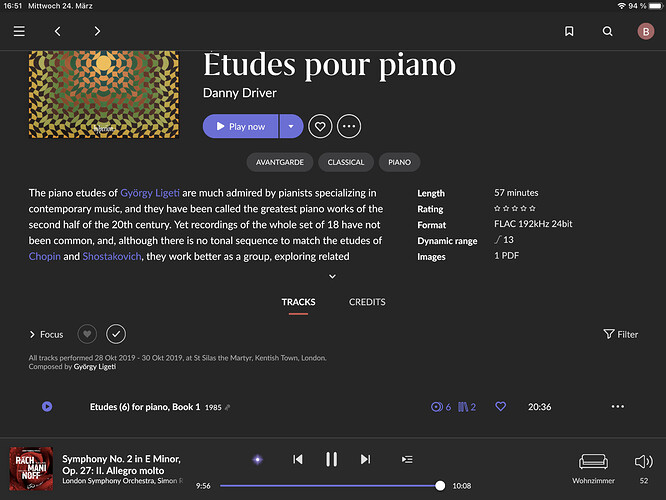 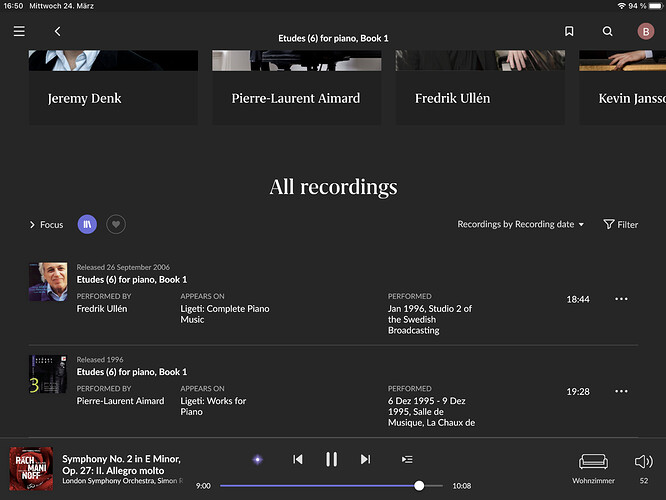 So where are the other two? They vanished into a black hole.

I believe there is a bigger issue here in terms of how items in ones Library are being accounted for then just that Main Album / Appearences Issue.

Rachmaninov, 2nd Symphony: Roon tells me I got four of them: Fischer, Rattle, Pappano and Gergiev. But I knew something was missing.

Therefore I looked in album view and - yes I was right: Litton with RPO is missing!!

So if Roon can’t even get the most simple things right, like reliably telling me how many recordings I have of any given composition, then what IS this software good for??

Listed as “In Library”: 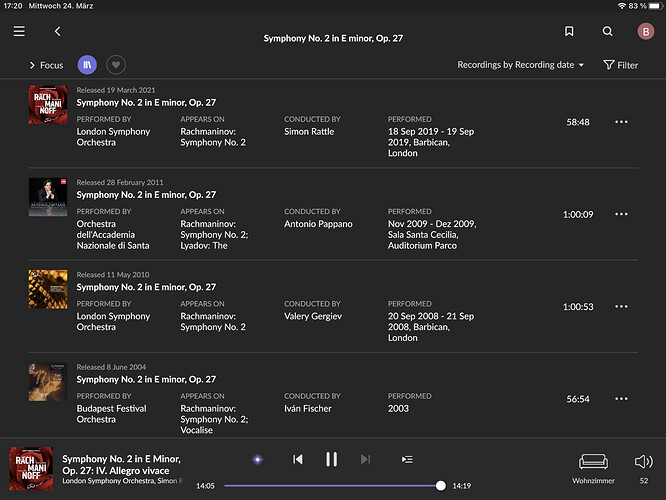 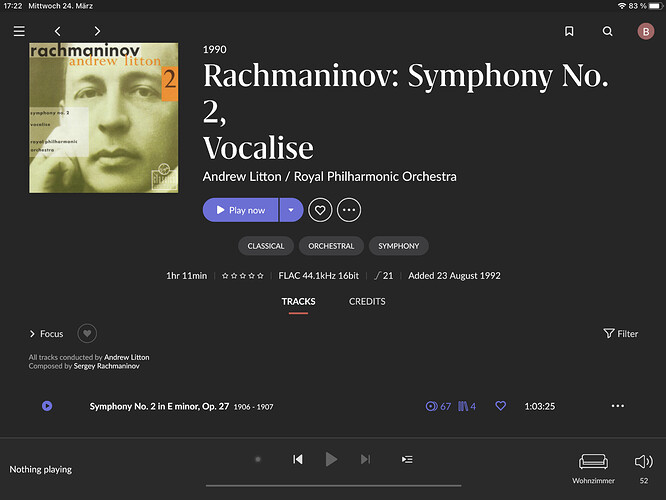 Do I now need to count each composition manually to make sure Roon got it right?? Just Hilarous !!

I yesterday reported a related problem:

1.8 B778: Roon doesn't consistently identify albums as part of the library Support

My library combines local albums and albums from Tidal. I have noticed that on artists’ Discography screen, not all albums that are already part of the library are recognized as such. This is, these albums are being shown on the Discography page as if they had NOT been added to the library. I’ll give an example with albums from Tidal: I yesterday added to my library two albums by Gunar Letzbor’s Ars Antiqua Austria. On both albums on the right, Ars Antiqua Austria is credited as main artist, a…

I believe there is a bigger issue here in terms of how items in ones Library are being accounted for then just that Main Album / Appearences Issue.

That’s my impression, too. Roon doesn’t correctly identify on all pages/views all objects included in the library. I think that many other problems are simply manifestations of that root problem.

To add to the dilemma:

With compositions where I have only one recording in my library, Roon does not show that there is one item in the library. It shows, well, nothing… 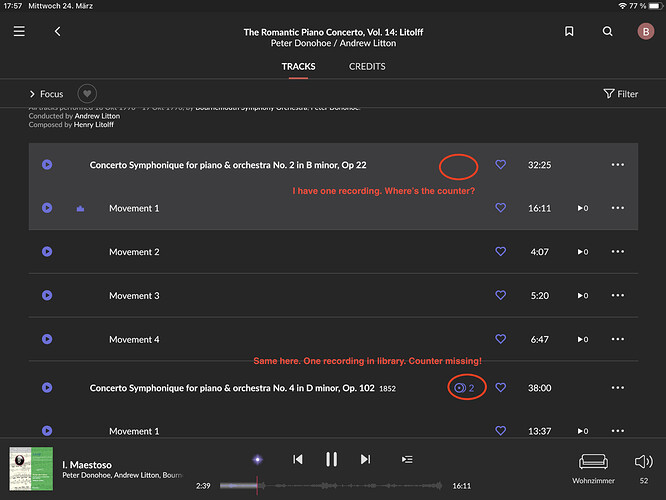 Hi,
Just out of curiosity, could you have another look at the “All Recordings” image in your post 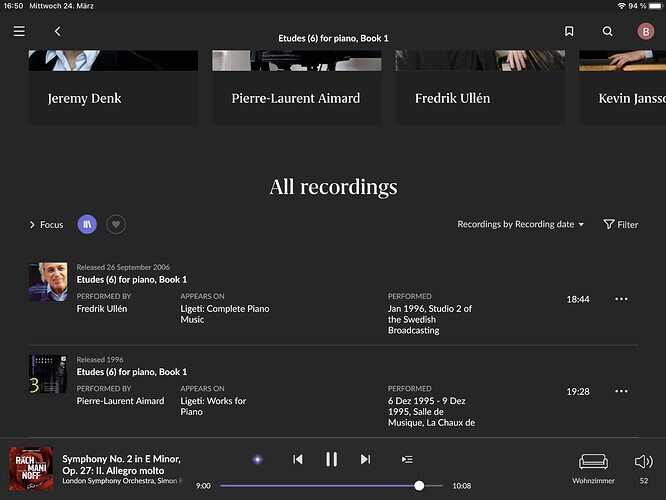 and report how “Only complete recordings” is set under “Recordings by …” heading. Is it set to on or off ?

In my case, setting it to on results in many complete performances being missed for totally mysterious reasons . I will post today on that issue. Maybe you could check on you side if you experiment similar problems.

HA! You are a star! I knew this “Only Complete Recordings” Setting does not work so I always had it switched off. But after the 778 update it must have turned itself on again.

Thanks for that hint. Makes it even more urgent to get that “Only complete recordings” setting finally fixed.

I’ll doubelcheck on a few other items that this is the full fix. Also interest to hear back from @Andreas_Philipp1. whether that fixes the issue also for him.

What it doesnt fix is that single recordings in the library don’t get recognized.

Thanks for the feedback, @bbrip — I’ve passed this along to our QA team for further investigation.

Also interest to hear back from @Andreas_Philipp1. whether that fixes the issue also for him.

I just checked, and no. The problem I reported yesterday doesn’t get resolved by turning ‘Only complete recordings’ to off. What I see is that albums where an artist is not main artist don’t get marked as ‘In library’ in this artist’s discography (under ‘Appearances’ heading), even if the album most certainly has been added to the library.

This still has not been acknowledged by Roon support.

Thanks for checking, and happy that I hit upon a serious issue. Quite serious in my case since it made me wonder for days about why some recordings appeaed to havesuddenly vanished from my compositions list.

Frankly, I am quite angry about the Roon team having let this bug slip through.

Dou you have any idea about how Roon (or Valence) decides if a recording of a composition qualifies as complete or incomplete ? Has this been explained somewhere ?

One problem can always slip by. But way too many issues do slip by these days…

This must be what’s plaguing me now. Lots of albums, even those in my local library, no longer show as “in library”. If I look at the album itself it shows it as in my library, but in my main library, or in the library for that artist, the albums are gone.

Just when I thought things had finally stabilized, an, even more severe bug has been introduced.

Propr to finding this thread, I started a restore process. Not expecting that to fix the problem.

Please could you tell me where I can find the only complete recordings setting. Thanks.

@Philip_Gibson I’m not Andre, but I may be able to help

You need to go to the composition (in the example below Verdi Requiem), then open the Sort dialog box, and at the bottom you find the “Only complete recordings”. selector. 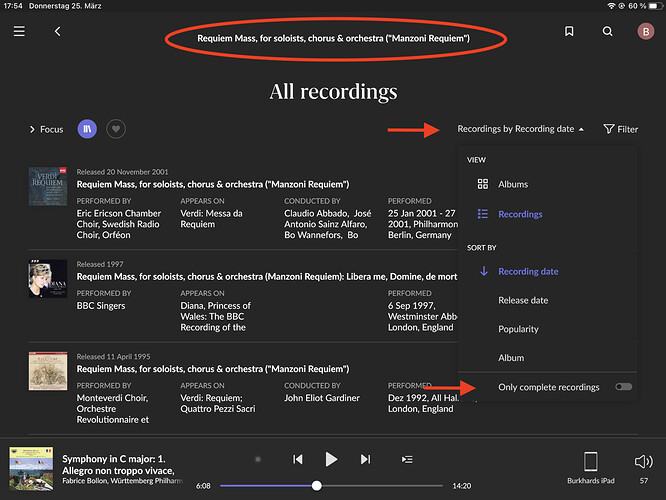 Perfect, thanks for your help, @bbrip.

That switch is actually at a completely wrong place. It is linked to a composition so one could think it just effects that composition, when in fact it is a general setting that should more logically be placed on the „Settings“ menu…

@dylan maybe pass on to the guys looking into this issue?

That switch is actually at a completely wrong place. It is linked to a composition so one could think it just effects that composition, when in fact it is a general setting that should more logically be placed on the „Settings“ menu…

Yes, that would make much more sense.