Roon incorrectly differentiates accented characters when it attempts to recognize compositions and link them to metadata. For example, look at this mess: 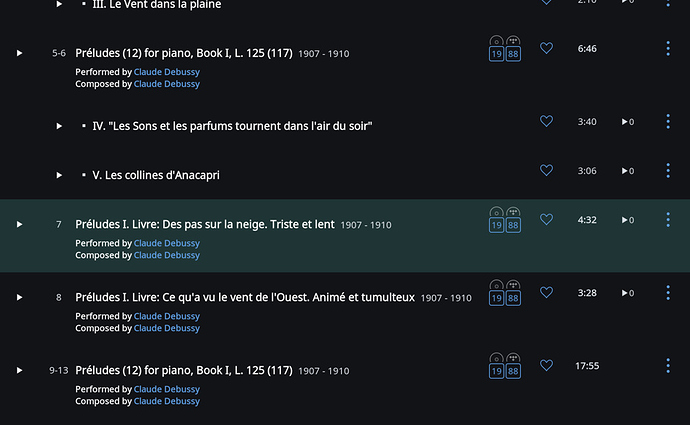 I submit that these two should be treated as a match by Roon and grouped accordingly.

Roon has already recognized the need for such adjustments. It has successfully matched “Frédéric Chopin” and “Frederic Chopin” for a least a year now. That same simple idea needs to be extended to compositions.

One other thing: if WORK and PART tags are present, they should take priority over the TITLE contents. Right now, TITLE seems to win out. The Roon algorithm was probably written when few people even heard of the WORK and PART tags, so TITLE was the default source. A simple code change is needed, to wit, IF WORK and PART are non-blank, use them.

I have a great deal of trouble with Debussy. Almost every import is wrong in some way without a lot of manual editing.

The basic problem is that Debussy did not use Opus numbers. But there is a story behind the “L” catalog numbers I’m not sure everyone is aware of. I wasn’t until I looked into it out of frustration with roon’s very poor identification rates with Debussy.

The “L” is after François Lesure and the first system of “L” numbers was only introduced in 1977. What this means is that not only is it guaranteed that the Debussy back catalog has no Opus numbers it is also extremely common that there are no L numbers either. In effect this means that many works will be rather unpredictably titled in French (with accents) or in Franglais (without) depending on the release market and will have no other Opus or L number identifying marks.

But it gets worse. The Lesure system was completely revised in 2003 and it is that one that allmusic/rovi is using. That is why you often see two L numbers. The one without the brackets is the 2003 one and the one with the brackets is the 1977 one. But any comments I have seen imply that not many are following rovi’s lead on this. You are going to see a lot of French/Franglais with no L numbers and when you do see them it is more commonly the 1977 catalog.

If you are using public data bases to auto tag or you are working off the back of a legacy CD you may well be using no L number at all and when you do use one you are probably using the 1977 one. This will obviously cause a lot of confusion and is why with a Debussy import it is so often necessary to do a cut and paste of canonical titles from the allmusic website with both L numbers. This seems highly unsatisfactory to me. It must be possible to build more intelligence into roon’s Debussy recognition logic. Unfortunately there are similar tales with other Composers from the core repertoire requiring special logic handling to improve auto-recognition rates.

PS. I had a quick look at Qobuz and the L numbers being used depend entirely on the recording date. So for example a modern recording of Suite Bergamasque is L 82 whereas a mid-80’s one will be L. 75.

This means that sometimes your composition will be identified as Suite Bergamasque and sometimes as a Mazurka. This type of thing happens to me a lot. I also get a very common confusion between Golliwog’s Cakewalk and Deux Danses because L 113 is different depending on whether you assume the 1977 or 2003 catalog.

Yeah, I ran into that issue earlier and wound up amending most of my Debussy tracks.

But the L numbers were not the issue in the PO. It was the fact that there was an accented “e” in one or two “Preludes” WORK tags, and that alone disqualified the composition from being properly grouped. 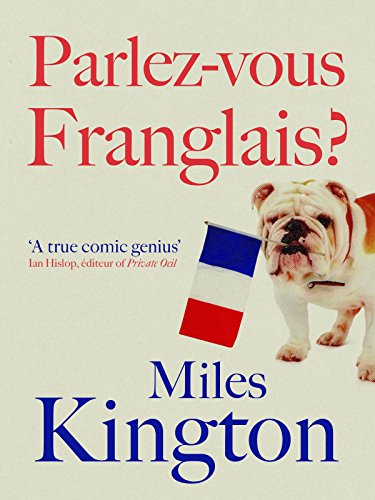 Just to bring it back on topic what I think I was trying to say was that making equivalents of the French (with accents) and Franglais (without) will no doubt help but there needs to be several other common equivalents made as well. Otherwise most of the time we will just end up with a routine cut and paste edit from allmusic every time we import a Debussy disk because the underlying problem is unsolved. That is pretty much what my experience is at the moment.

Although not all possible combinations happen (it would be too illogical even for the labels), various combinations of the following are routinely happening and there may be a few others. My maths is not good enough to work out how many possibilities that is:

I imagine the scope and extent of title recognition could be expanded to the point that even IBM’s Watson computer would struggle.

But lots of search algorithms have managed to work around accented characters and can match the basic characters (Franglais, I guess).

I was POed to learn of the L debacle, but I have to give Roon a pass on that one. The accented character problem seems like an oversight (or dare I say it, bug) to me.

Have you had any luck with this one:

It is just an example. But I have many like these. A lot of the best of the core French repertoire, unsurprisingly, is recorded on French labels so this is what it looks like.

By the time that that rovi/allmusic gets to it, it looks like this in a strange mixture of French and English:

But I still cannot get a composition id in roon. This is now quite a mash-up. Accents have been stripped out, both English and French words are being used as well as both L numbers. Still no match

Do you have a TIDAL “reference” album imported with this work?

Sorry my sense of humour will be my downfall

Well, the OP thought it amusing.

Hey @Mike_O_Neill , no apologies. It was funny. Sometimes (well, always really my OCD takes over).

I would really like to see some metadata traction on the French core. It is driving me absolutely bonkers. There must be some low hanging fruit. Accents has to be one. I even try translating the titles from Erato and the rest of the French labels in google translate. Who exactly is allmusic using to come up with such bonkers Franglais and have the cheek to call it canonical? The worse thing is that we start beleiving it. It is not canonical. there are no standards, No one has agreed to it. Where on earth does it come from?

Yes. After a lot of googling effort I worked out in this particular case the Franglais version that roon was expecting so that it could make a match. The problem is I have a long, long queue of others that I have not got round to.

I don’t have an answer. I don’t think anyone has. And I don’t want to rain on your parade. Ignoring accents in certain cases will help I am sure. In a handful of cases because of the shared history of the UK and France since the Norman invasion of 1066 the French and English spelling of words is the same. For example, prélude and prelude.

It’s just that in many cases the word itself and more importantly the grammar and the entire construction and word order of a phrase (like a work title) is different. I don’t know how far the industry is in commoditising this sort of localization logic.

You might have already run across this. MusicBrainz uses the original Cyrillic alphabet for all Russian artists. Makes it difficult for this mono-linguistic guy to search for Rachmaninov’s stuff.