After searching for Berlioz Symphonie fantastique:

I am informed of the presence of 7 recordings from my local library:

Note that there are really 8 recordings: 5 in CD resolution, 2 in high res, and 1 in DSD, whereas 7 were announced before. This annoyance comes from the fact that there are 2 digital versions of one recording (one DSD version, one 176 FLAC). Roon should have reported the 2 versions separately, instead of lumping them into a single recording. This is a mistake in my opinion.

The above results were with “Only Complete Recordings” set to on.

If i switch “Only Complete Recordings” to off, if get a total of 13 local recordings:

New conductors appeared, and new performances by others also appeared. Note in particular the appearance of Yanick Nézet-Séguin and Pierre Monteux. 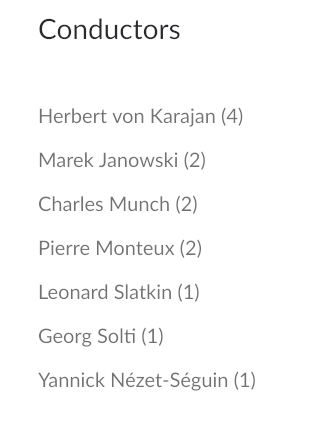 If switching “Complete Recordings Only” from on to off results in the appearance of Nézet-Séguin and Monteux performances, this should logically mean that their recordings are incomplete. The problem is that this is completely wrong, as the 3 recordings by those conductors are all complete.

In the case of Nézet-Séguin we have:

This recording is no doubt complete. The same applies to Monteux 1950 recording:

Why does ROON conclude that the performances are incomplete, when this is clearly the opposite ? Could Roon devs explain the reasoning used to reach such a blatantly false result?

This is clearly a bug, and a serious one, because it may let the user in the ignorance of important performances. With “Only Complete Recordings” set to off, 1500 recordings are reported for Qobuz, and 1278 for Tidal. With “Only Complete Recordings” set to on, the numbers drop to 146 for Qobuz and 141 for Tidal. Over 1000 incomplete recordings out there ? Really ? I have no confidence whatsoever in the Roon selection algorithm.

I hope this bug will be seriously adressed soon.

4 Likes
Compositions recognized, but not included in local totals
Some performances are not displayed in All recordings
"All Recordings" & the new feature "Only Complete recordings" don't fit
bbrip March 24, 2021, 8:35pm #2

Same problem here. This toggle does not work as designed at all. It supresses half my albums in the library when it is active.

+1 for this issue. Essentially, having the toggle “on” shows only composition results from Qobuz (in my case), omitting all the performances found in my local files. Leaving the toggle on, also affects the counts shown to the right of the composition title in an album view.

Happy to provide more detailed examples if it helps. The workaround is to leave the toggle off at all times - given these bugs, it seems to be quite unusable at this point anyway.

Hey everyone, I just wanted to follow up and let everyone know that Mike made a comment on this feature here with some explanation:

Thanks Dylan for closing the loop on this.