While letting roon radio do its thing I discovered that the queueing mechanism became faulty. On about the fourth song selection, the Queue screen became stuck displaying the same song track last played, and the next song lined up in the queue. Also, every song thereafter, the “Coming up in…” queue notice displays the same song track for every track that has followed.

Have played 30+ more tracks since then…still, the same Queue screen display and the same “Coming up in…” song appears. Initially, I kept clicking the thumbs down button > “do not want to play at this time” prompt, thinking that would resolve the issue. But after a few unsuccessful attempts, I just left it alone and a different song would start playing regardless.

Figure I might be able to restart the hardware to see if the issue clears up. But I will wait for support to tell me what’s the best thing to do. 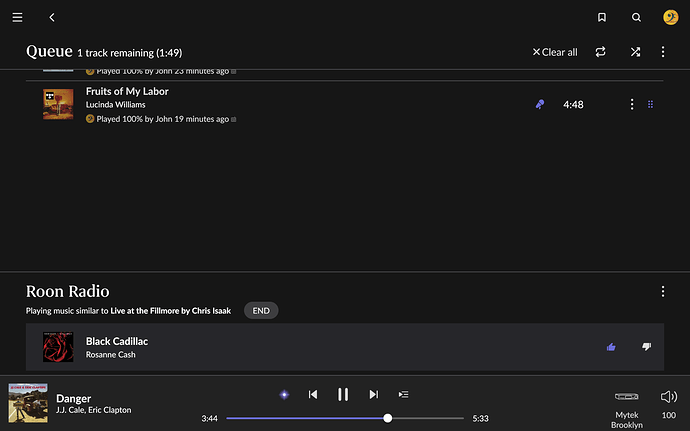 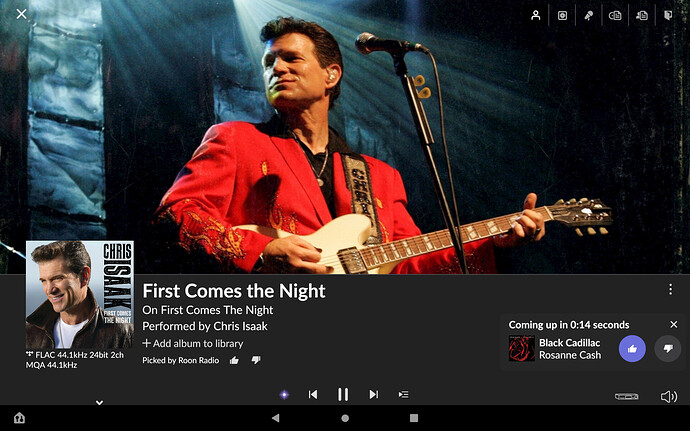 Well, as I surmised, the queuing issue has resolved itself after I closed the roon app on the Fire so I could upload the screen captures via the browser. Have never seen this problem before now. So I am thinking this may be a v. 1.8 bug.

Will post any further sightings of this issue should it reappear.

Will put an image of the tracklisting from the roon radio session, related to this issue, for more insight. Reading from the bottom of the list, note that the first image I uploaded earlier is taken four tracks after I had already played the Black Cadillac track. And the second image is taken seven tracks later, still showing the Black Cadillac song as the queued track. The Lucinda Williams track always displayed as the track currently playing on the Queue screen throughout the session.

Thanks for the details, @jb76!

If you see this occur again please let us know!

In the meantime our team will investigate on our end.

Not sure if this relevant here or possibly a pointer to anything but I’ve experienced something similar in my (non-Radio) queue, where the track playing stopped updating, along with the ‘Played’ count for completed tracks and the waveform/position in the track indicator at the bottom.

This only ever happens on streamed tracks - Qobuz in my case - and could be corrected by tapping elsewhere in the queue on a track from my own local library. Immediately, the displays are updated and returning to Qobuz tracks now gives all the correct responses.

To add relevance to what you experienced, my queuing issue arose when I was going back thru the queue, during live playback, and clicked on the three dots next to a song previously streamed. When I returned to the Now Playing screen I was presented with the “Coming up next…” window displaying the Cash song track which had played previously. I thought maybe the radio was simply offering me a different version of the song. But reopening the Queue screen and seeing the Lucinda track showing as the current track playing, I knew something was awry since I was actually listening to a Clapton song track.

Maybe the support team can toy around with the Queue screen during live playback of streaming tracks to duplicate the issue.

I’m fairly sure my problem was similar. I saw it quite a bit when I first got Roon but it seemed to be solved a few months back in an update.

As a philosophical question: do you find the sheer wealth of information available in Roon occasionally distracts you from actually listening to the music? Maybe that’s one for another thread…

Glad to hear that you’re no longer experiencing this issue Keith. If our queuing glitches are related, I would have to assume then that it is not a bug due to the v. 1.8 release, based on your timeline. And it does not appear to be a widespread issue which makes me wonder if it is a simple cache issue.

With respect to the listening distractions, I concur. Between the rabbit holes roon can take you down and the various, “what have you been listening to” forum threads, it’s hard to hear an album in its entirety anymore.

Started adding leads of interest to a “Listen Later” playlist someone in the community suggested. But the temptation to start sampling tracks to determine a tip’s worthiness can take my attention away from the music currently playing. For the moment though, I’m enjoying the hunt.

Sorry, I should have expressed myself more clearly: it was solved in a 1.7 update but returned with 1.8 (or I did something in 1.8 that I hadn’t done for a while in 1.7 and triggered the been-there-all-along bug…)