I just accepted and installed the most recent update that I was prompted for today 7/11/16. The system has not been able to launch since this update. The windows states that because of the recent update it will update the database which can take longer than usual. I’ve run updates before but never with this type of response.

I have Roon server running on a MacMini with El Captain on a flat 24 bit IP network. The music content is cataloged from 3 separate Netgear NAS for a total of approximately 6TB of data. Is this recent update causing the whole library to catalog all over again?

We have similar sized music storage, though mine is just on one QNAP NAS.
I can’t recall how long exactly (I did not monitor it) but it was at least an hour or so of DB updating until Roon was available.

How long has it been updating for on your system?
If it’s significantly longer then I think we need to get @Eric to take a look at your log files.

Thanks Carl. It’s been at least 6 hrs. I forgot to mention that these are all WAV files. The initial install took over a day to fully catalog the libraries. The real question at this time is, do you suspect that the full library is being cataloged as a result of the update? I’ve run updates from Roon in the past and the system came back up with no delay.

Hi @Fritz_Rey ----- Thank you for your feedback and apologies for the inconvenience here. Our current release required a relatively heavy database migration, compared to previous releases.

6TBs worth of content means your collection is definitely on the larger side, but on a Mac from the past 2 or 3 years I suspect that process shouldn’t take more than hour or two, and possibly much quicker than that. Can you please describe, in detail, your current setup so I understand exactly what you are working with and we can start narrowing down the cause of this issue. Thanks!

The update actually completed over night. It did take hours though. I have a flat network. The Roon server is installed on a MAC Mini. The 6TBs are spread across 3 Netgear NAS each with about 2TB of WAV files. When we first configured the Roon server it actually took about 36 hrs to finish cataloging the music.
I’m in the process of installing a second server in the exact same scenario.
I’m looking for your guidance if you don’t mind. Will the client app on an iPad locate the server if the server app is installed on a Windows based system? I’m trying to decide the hardware to use. I like the MAC Minis because of their form factor and sleek appearance. The iMac I’m currently running with Roon is an older one about 6 years old. It often freezes seemingly due to Roon.

[quote=“Fritz_Rey, post:5, topic:12440”]Will the client app on an iPad locate the server if the server app is installed on a Windows based system
[/quote]Yes, it works just fine… Enjoy.

@Fritz_Rey ----- Thank you for following up. Glad to hear that the update has completed. My best advice for you, in regard to gear, especially if you are enjoying the form and function of the MAC Mini, would be to consider getting a NUC (provided a picture of mine below).

Hardware really comes down to personal preference and need. This is often contingent on how the user is trying to integrate their roon experience into their daily lives. It is important to understand that when considering new equipment, at minimum, it should meet roon’s system requirements to ensure that you are achieving optimal functionality while using roon. 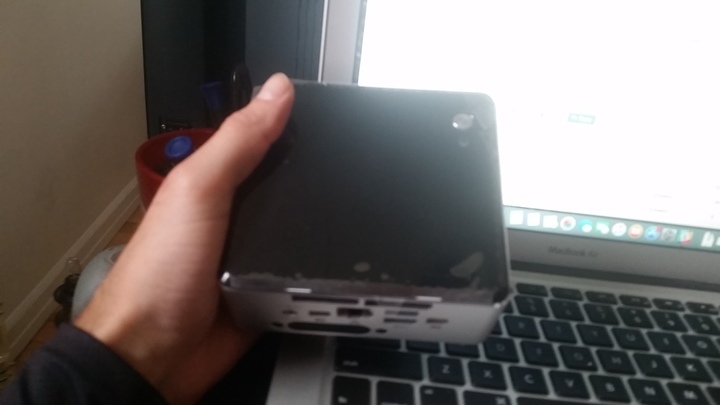 Thank you for those details.