I do like the display feature, I haven’t had time to switch my current setup but I will definitely be doing it soon.

Right now I’m using a old Mac Mini connected via HDMI to my TV using the Roon App in full screen mode, the things I miss from that is the track format / resolution and what’s coming up next.

But outside of that nice to have, the new option is great. Keep up the awesome work guys!

Like some others above, it’s hard not to make a comparison with JRiver. I’ve hardly used JRiver since I started with Roon over a year ago, and I don’t miss it at all (apart from the odd function I go back to it for).

However, if you want to know where this Displays function could/should probably be heading, check out JRiver’s Theatre View to do a similar thing. Really slick, using transitioning artist-related photos in the background. Somehow, they accomplish it without making the screen too busy, but it shows really interesting, and constantly changing, views across the artists’ histories. I don’t think it would interfere with Roon’s minimalist aesthetic.

I can’t recall whether lyrics are involved, and it is done within the app itself, so no doubt a different set of technical challenges involved.

The current Roon Displays is a good start, but there’s a way to go.

It might be too small for smaller displays as I think mentioned already. And in my case with a 4 meter film screen the lyrics are too big, they become too dominant that’s why I leave them off at the moment.

Keep up the good work!

After testing the Displays feature (after getting help on this forum

) I realize I would prefer to have a layout designed for smaller screens. When I display it on my TV it´s fine, but when I´m using my iPad, with the Display function on, standing on my HiFi rack it is quite small and difficult to read.

…and when playing compilation albums if the track artist could be displayed rather than the album cover? Only use the cover if the artist isn’t recognised within Roon.

Yeah I completely agree with you, that’s what prompted me to look into the web version of Displays and found you can edit the page elements to change things such as enlarging album art and font, removing the artist images, etc, although it’s temporary and will revert to the default display layout when the page is refreshed/reloaded. But you can save your configuration and import it each time you start a new session.

I’ve been tinkering around with many different adjustments and layouts since they launched the Displays feature and have pretty much settled on this one:

and the original layout for reference: 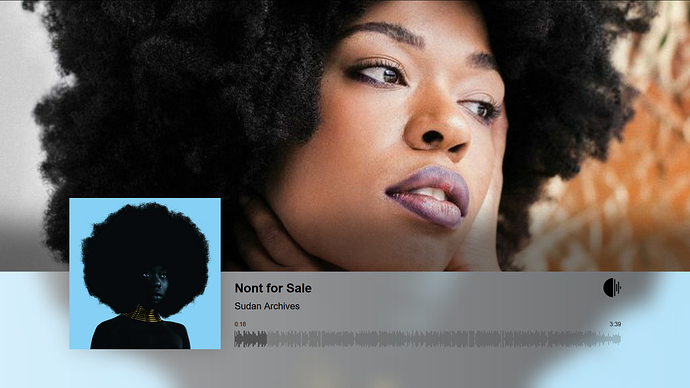 I’m super happy with the Displays feature and use it constantly, I’m hoping at some point they allow us to change the layout and settings with a simple input interface.

I realize it’s hard to please everyone, but I’m not sure I’d like to see loads of customizing options for displays either. The space at the top seems wasteful, but it’s obviously necessary for displaying lyrics. Perhaps a choice of 2 or 3 skins would be nice: art-work, visualizer, or karaoke mode.

Just an idea that, I think, could improve the amazing display feature in Roon:

I bought a Chromecast for now, that I plan on repurposing later. I’m eagerly awaiting the next version of AppleTV. Hopefully Roon will have an AppleTV app for this in an upcoming release. That being said, It looks spectatular on Chromecast.

I just started playing around with the Display feature and noticed that one of my Sonos Zoneplayers is being listed when I select the Volume settings (see below). I know that this is meant to show that I am playing music from my Living Room zone but its a bit confusing. Perhaps the top title should be Playing From or Zone instead of Display. 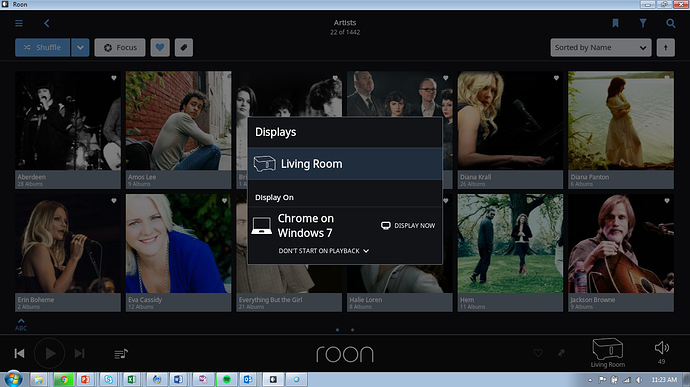 Yes, now I come to think about it, you have a point. I agree that the wording could be improved

I like the Display feature but its too static, especially when dynamic lyrics are not available. I think it needs a bit of random movement of graphics. Perhaps have the album review/artist bio fade in and out slowly, or have the album art slowly move about the screen, something to keep it interesting.

How about an area that rotates between “up next” and playback statistics like sample rate, format etc.?

I added a VU Meter…

ugh, for a big music display that is really odd in my opinion
it is like at a concert the display on the video wall shows what microphones and monitor speakers are used

You say that, but I know people who would love to know…

I’d say it’s more like information relating to the artist at a concert - date born, where from, whatever. I think something analogous to microphone or monitor type would be HDD type, CPU, RAM, and certainly that’s not what I suggested.

To please everyone, perhaps there would be an optional “info box” that would rotate through whatever info the user chooses through a menu of radio buttons - up next, format, credits, whatever.

(Now someone will chime in and say “not a box, I hate corners…”)

I mean the icon.

First comment in the community by myself - congrats on the really nice feature you’ve built in! Please fix the “cut-off heads” issue while displaying artwork in future to make it even nicer

thanks for this very awesome feature and great design of the “now playing” screen including the lyrics feature.

I have one remark, though:
Before this feature, I used the Roon Shortcut Key in a win10 script of mine, to immediately switch to roon’s full screen mode (Hotkey for “Show Screensaver”) , whenever I would like to see album art on the big screen while playing Roon music. This also allowed me to map this shortcut key to my harmony remote, so that I could use my physical remote to turn on the TV and immediately see what is currently playing.

Now, this does not seem to be possible with the Displays feature, as I would need to navigate through the menu and activate the display. Is there any shortcut to this via a hotkey e.g.?