Obviously a mountain of issues with this release and no doubt the devs have their hands full. I’ll just record mine for posterity.

Aside from the common authorisation issue, I have a number of HDMI endpoints purportedly connected to the core showing up under Audio settings.

The “Device Volume” setting has been lost, meaning I no longer have any control over volume from my keyboard. The default is LOUD, no doubt to the neighbours’ chagrin…

Maybe the recent Windows 10 major update has thrown some curveballs?

The HDMI 0-4 are standard, have those on my NUC. I use HDMI 0 for HDMI from Nuc to Receiver zone.

Wasn’t familiar with the keyboard so I looked it up. Apparently it has configuration setups for the knob functionality. Mentioned the default setting was volume control. Has that config setting changed.

As for Device Volume, is the zone setting Device volume of Fixed volume?

Build 571 reset all my Roon bridge devices and they had to be added from scratch again and all settings redone.

It was previously set to Device Volume, however following the update it switched to Fixed Volume. Device Volume is no longer presented as an option. I have:

As for the HDMI settings, never seen them before on either of the two NAS I’ve had Roon installed on.

These aren’t showstoppers so don’t concern yourself too much. Other people seem to have more pressing issues.

Edit update. Not sure what I have done but been messing for an hour or so and working now.

That happened to one of my Ropieee endpoints but not the other which was odd.

Hello @Ron_The_Bear, thanks for your report! Unfortunately the first screenshot you sent is broken for me, can you upload it again? Also, just to make sure I’m on the same page, was it the Windows to NAD DAC that lost the device volume option? Can you show me where it was?

Lastly, while discussing your issue with the team they asked that you try refreshing your RAATServer as demonstrated below:

Thanks and let me know if this helps!

Hi Nuwriy and thanks for your reply.

Not sure why the screenshot should be broken as it’s hosted by Imgur, a public photo site. Should be accessible at https://i.imgur.com/bRgIGLD.jpg

Only issue is screen clutter in Settings. It’s kinda annoying in an obsessive/compulsive sense of wanting to clean it up, but I’ll just choose to ignore it.

Yes, DAC is connected from Windows via USB-B.

Volume for the DAC is in Device Setup > Volume Control. Just noticed there are two endpoints listed for the NAD, one ASIO and the other WASAPI. “Device Volume” isn’t available for ASIO, but is present for WASAPI (options are Device Volume/Fixed Volume/DSP Volume, which is how I remember it). I’ve set it and can control volume up/down via keyboard Fn + F11/F12, but the dial/crown still has no effect. I’m not totally sure now that this is a Roon issue or is some sort of Windows/Logitech conflict, perhaps triggered by the Roon update. Have re-installed the Logitech Options software with no effect. Kinda leaning towards Logitech being at fault here and will pursue that line. Will advise if I get it fixed.

Lastly, needed to actually stop/start the Roon server rather just close the Windows client to get the new RAATServer folder created.

TBH in between re-installing drivers etc I’m not sure if this last step had any effect whatsoever. It MAY have resulted in the WASAPI endpoint appearing for the DAC, or that endpoint may have been present previously and I didn’t see it. (All up I have 17 endpoints listed, only four of which I actually use; the rest are Apple TVs etc plus the phantom HDMI endpoints already mentioned, and it’s a fairly cluttered screen as a result).

Don’t bother yourself with this further; I’ll live with the phantom HDMI endpoints which claim to be “connected to your Core directly” and try to resolve the volume issue by investigating Logitech. Other Roon functionality appears to be working without issue.

I saw your image on Imgur; those are not ‘phantom’ endpoints. Irrespective of how many physical HDMI outputs the motherboard has (e.g. two external, and one accesible internal on the board), the Intel drivers expose 5 HDMI ports.

I have an ASUS mini-ITX motherboard and see exactly the same, in spite of having just one physical HDMI port configured. That’s just as it is. I don’t use those ports to output sound, just leave them alone. 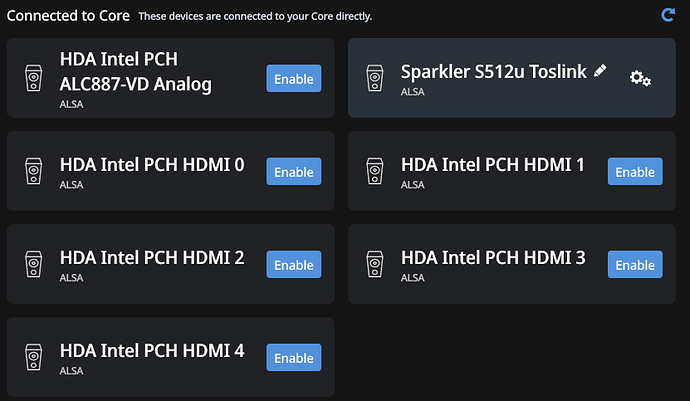 Fair enough, you’re the second person to tell me. Had Roon for 2.5 years and they’re brand new to my machines.

Had Roon for 2.5 years and they’re brand new to my machines.

Have you been running your Core on Linux before? I have no experience with Windows since Win '98, but on Linux this seems to just be so…

I’m sure I’d have noticed if they were there previously. Panicked when i saw them as we’ve been experiencing a widespread Chinese cyber attack in Australia, and QNAP is Taiwanese. First thought was I’d been hacked…

Update on volume issue: was just about to give up after trying every suggestion I could find on the Logitech forums. Magically the crown came back to life while I wasn’t doing anything in particular, just knocked the crown and noticed the volume bar appear at top left of screen. Can’t say what made the difference. Don’t like mysteries, but can only write it off as a tech anomaly…

Thanks to everyone who has offered advice.