I seem to have gone backwards with the latest release 70. I cannot get my library to complete scanning any more. It is stuck at about 1/10 of the total (full library should be around 220000).

I have deleted the library etc no no luck. The issue seems to have occurred after the update to build 70.

I feel like I am spend more time fiddling with Roon than playing music.

I will Need to either try Windows Version of Roon on the MAC Mini again, or go back to JRiver after months of on and off frustration with the product 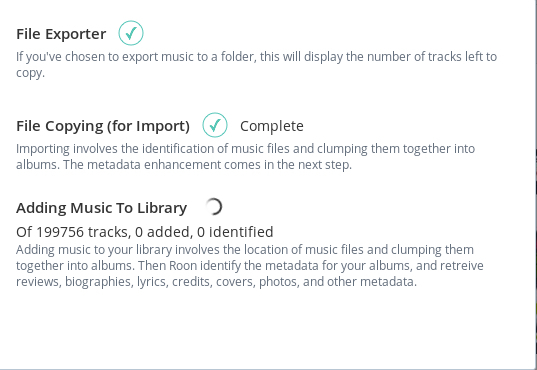 I get lots of the following in the log file

Here also issues with the library scanning.The spinner is running… again, scanning everything…again
But I’m missing many albums. Why is the library being scanned again and again? But when I WANT TO add an album to the library it’s not added automatically? Only way to have it appear is to restart the program or dig into the settings and do a force rescan.

I’m getting very frustrated with this program. I want to enjoy my music collection without fuss not fight with a program to make it work.

Also when the scan completes there are often albums in the “recently added” that I added weeks if not months ago. So the recently added view is never correct.

Hi Derek,
Just tagging this so @Mike will pick it up … I suspect he will want to take a deeper look at the Roon log files.

Try copying some of your music to your laptop and setting that up as a new watched location. If the local storage remains rock solid then you know the problem is in the network.

Alternatively, get a non cloud USB drive, transfer your music and use it as a test to eliminate the problem being the WD.

Also as a test, I would also suggest turning OFF ALL THE CLOUD OPTIONS on the WD NAS. And see if that stabilizes things.

Additionally, I would as a test put the WD and the laptop both wired to a 5 port switch to see if that makes a difference.

Thanks for the tips Daniel but I’m quite sure that the WD is not the problem.
It performed great upto build 69 and has no problems with other media on it (movies mostly). Also audirvana and plex have no problems with any of the files on the drive. I’ve turned off cloud services and iTunes server the moment I hooked it up to my network.
I’m sure that having your files stored on an usb/thunderbolt drive will be more stable but on a laptop this is not a practical solution.
My network,created by my airport extreme is stable and fast (450bps at the moment)

Right now Roon has stopped scanning and it seems to have found all my files again. I hope it won’t start scanning all over again soon…

thanks again for trying to help

I seem to have resolved my issue. I went to the log file and looked at the last imported file in the log and estimated the next imported file. Deleted those 2 items from the NAS (only 1 mp3 file in each). and started scan again. That seems to have fixed the issue. Not sure how a potentially bad file can stop the Roon importation process? Itunes and Jriver seem to be able skip anything they don’t like.

At least I have a full Library again. I love Roon as it is great software, just frustrating at times.

Hi, do you still have those files? I suspect @Mike and the Roon devs would like a copy of them so that can get to the root cause of the issue … and craft a fix for it.

Hi Carl. Yes I had a copy on my backup drive. They were some very old 128Kbs and VBR MP3’s. Part of a top hits of the 80’s, which I am not concerned about deleting forever.

I don’t know which of these caused the issue but after I deleted a total of 8. It was after the last 2 were deleted that the library scanning continued.

Happy to send a copy, of the folders

Hey @demondes – we’d definitely like to see the files. I’ll be in touch via PM with a way for you to send them over. Thanks!

Mike do you have any solution for the issue below. I again have files in my “recently added” that are months old. This happens all the time

Also when the scan completes there are often albums in the “recently added” that I added weeks if not months ago. So the recently added view is never correct.

Mike do you have any solution for the issue below. I again have files in my “recently added” that are months old.

Hey @stevev1 – we’ve fixed a few bugs recently that were preventing us from importing certain files. In the past we may have skipped these files, flagging them as corrupt or unreadable, but we’ve found some cases where these files can be imported. It may be that a song was newly imported, which can affect the import date of the entire album.

Would you mind looking over the track browser, focusing on the import dates you think are incorrect, and then letting me know if this seems like a few files that we’re newly added to your library, or if this seems to be more widespread.

In addition to the media importing changes, some people have seen albums being re-imported as a result of the file tracking changes in Build 69. This is because some weaknesses in Roon’s previous tracking implementation could cause files to be misidentified and re-imported when they’re re-scanned, moved, or edited.

While these issues have been addressed by our new tracking mechanism, we have seen one or two cases where latent issues that predate Build 69 caused albums to be re-imported as their audio is extracted for tracking purposes going forward. This is an unfortunate side effect of the new functionality/fix, but this should be a one time occurrence if it was caused by the new tracking, and shouldn’t happen again.

Let me know if that’s all clear, @stevev1!

I looked at ‘tracks’ and then focussed on date added within last week. I found a few single files that were added. These correspond to the albums that are in recently added. It are indeed single files and not full albums. But I can’t be sure if these tracks were imported before or if roon just found them this week!

So this is ‘normal’ behaviour?

Well, I guess it depends on your definition of normal

I would generally hope that we never skip files that actually could be imported, but we did find some bugs here, and there could be others out there.

The part that is normal is this – say, you have a 12 track album, but for the first 3 months you have the album in your library, you’re missing one track. If you later add that track, and Roon merges it in with the other 11 files, the album will be considered “new”. Normally, this would be because you took an action to add new music to this album, but in this case it was the result of a bug fix, which makes it a little less clear.

If these newly imported files are messing with your album import dates, note that you can edit the track import dates by selecting all the tracks on the album, clicking edit, and setting them all to either a date of your choosing, or to the files’ modification or creation time on disc.

You can also select all the tracks in your library (in the Tracks browser) and set all your import dates to the files’ creation or modification dates. My Roon database is about a year old, but the library on my NAS goes back 5 years, and with all my tracks set to their creation dates, it’s super cool to go back and browse what I added to my library during a given week in 2010