I’ve noticed that since Build 88, every album has the “Other Versions” button, even where there is only one version of the album.

Not a problem, just a bit confusing if you expect to see it only where there actually are other versions.

This happens when we’ve matched your album to a version on Tidal.

This lets you compare the mastering of different editions, find missing tracks, or upgrade lossy copies to their lossless Tidal equivalent.

If @rbienstock means what I think he means - I also noticed this.
Here is a Tidal album - the only version I have of it (nothing local) - and it still tells me there’s another version on Tidal. I doubt there are 2 versions of this on Tidal, because I haven’t noticed any differences when I clicked “View Album On Tidal”. 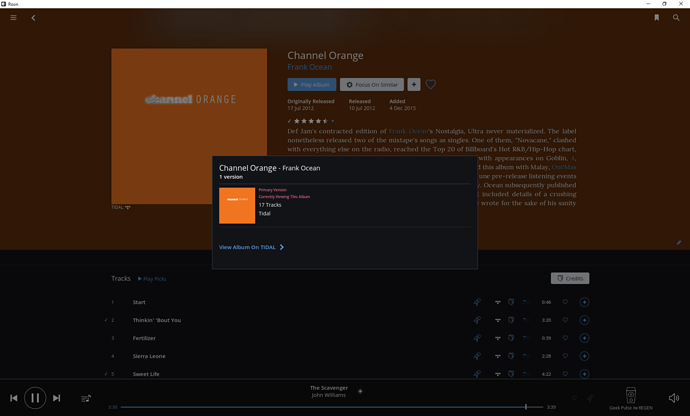 The idea behind this feature is that since you’re logged into TIDAL you do have access to another version, which you might want to check out if the version in your library was missing a track, or was lossy or remastered.

I think it is because you most likely added that album to be in your library from Tidal. I have a bunch of albums I added from Tidal and it does the same thing.

I think what they mean, and I see it too, is that if you have a Tidal album in your library, it brings up the “other version” button and directs you to the same album in Tidal. Obviously, this is unnecessary.

Unless, of course, I’m missing something.

I would expect the Other Version button to show if:

I noticed another thing when looking at this issue. When I bring up a flac album that is on my system and select “view Album on Tidal”, then add it to my library, it doesn’t appear to add it. However, if I go the artist page both albums are there. It shows the album twice, not once as a duplicate. They also don’t show as duplicates when I focus on duplicates.

Man, this is hard to explain.

Sorry for the long message and maybe this should be moved to support.

Hi @Mystic, I add almost all of my Tidal albums from within Roon and the issue still occurs.

@Greg is correct. The “other version” leads to the same exact version from the same exact location. In my screenshot above, there is only one version of “Channel Orange” on Tidal, and that’s the one I added to my library. But Roon thinks that what I have in my library is somehow different than what’s on Tidal, even though they’re one and the same.
And @anon94274355, I added this album from Roon.