I can edit album covers with Build 99.

Can you describe what has changed for you ?

Check they are JPEG images. Some types won’t work in my experience.

Yes they are jpegs
I just restarted the room program and was able to add a jpeg one time to the album in question then no go when I try to do it again with a different image…
I wonder if it has something to do with the fact that its a DSD128 download?

However when you click in the box that says “drag images here” you get a window from where you can select the file you want to use. Adding a picture this way has always worked for me.

Also on the IPad app, editing a picture and clicking in the drag her box causes the app to close.

However when you click in the box that says “drag images here” you get a window from where you can select the file you want to use. Adding a picture this way has always worked for me.

Thank you so much. I was just complaining about the lack of this feature in another thread. This is a life saver.

OK, that didn’t work for me. I was able to get to the file open dialog and select my image file, but then Roon basically hangs. I get a screen like this: 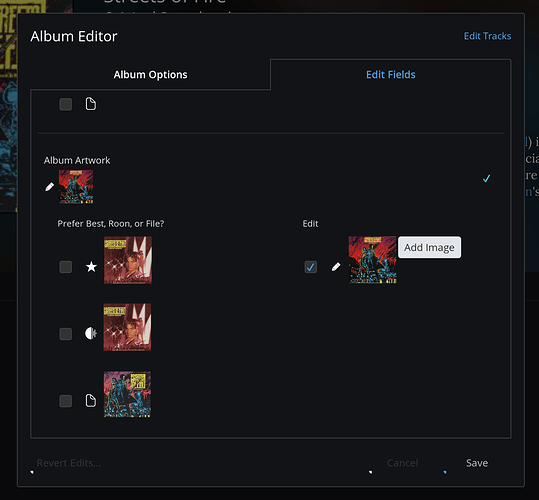 Notice that the save button has no blue background and clicking anywhere on the screen does nothing. I have to quit Roon to get it to work again.

Let’s flag down @mike and @vova to look into this.

Drag n drop has always been problematic for me, but not being able to add from the file dialogue is new.

As a workaround if you save a cover pic into the album folder of a Roon library and name it “cover.jpg” or “folder.jpg” then Roon will pick it up if you hit Rescan Album.

Can everyone having issues here let me know:

I’m seeing some issues and I’m hoping to get them resolved for 1.2, but I want to make sure we’re all talking about the same issues. Thanks all!

I’ll give you the info for the image that I posted above, but on my system, I get this problem with EVERY image and every disk. Here’s the data on my image file: 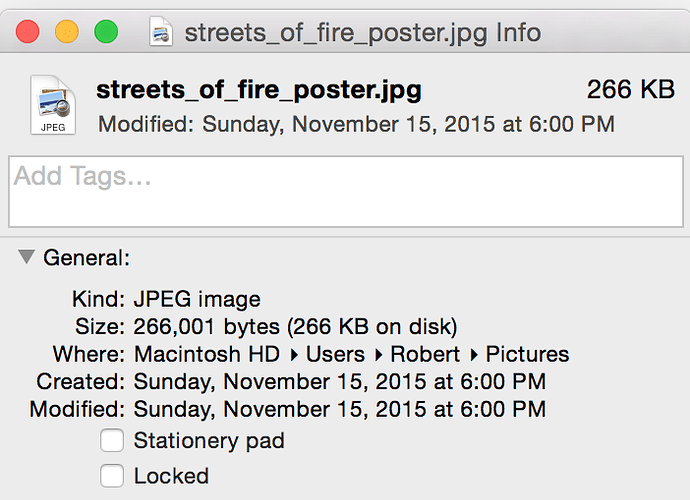 The file is stored on the same laptop that is running Roon Remote.

The exact steps are as follows:

As I said, this happens for me with every album I try and any .jpg image file.

One slight modification to the above: It is possible that in step 6, Roon isn’t hanging, just thinking really hard. I went through the steps above to be able to correctly list all the steps and when I got the hang in step 6, instead of quitting Roon, I just walked away from my laptop for 10 minutes. When I came back, the Save button had highlighting and was clickable.