Bulk removal of Qobuz / Tidal albums removes albums from Roon, but not Qobuz/Tidal

Not sure, but it says 1851 albums on the top of the albums page (if you’re going to ask for this, you should probably list the number of tracks at the top of the tracks page as well)

Twice I have selected a bunch of (Christmas) albums to remove from my library. About 80 albums. I then select “Remove from Library,” the system confirms I want to remove the albums from the services, with album counts for each, I say yes, and after a few seconds, it seems to have worked. They are gone from my Library in Roon, but if I go to Qobuz all the albums are still there.

I did this once and then later the albums showed back up in Roon. I suppose after a subsequent Qobuz/Tidal sync?

One other detail is that it seems this did work on Tidal, but not on Qobuz. There was only 1 album on Tidal in the selections, and over 75 on Qobuz, so maybe this had something to do with it.

agreed on the tracks thing, FWIW, you can get the track count on the “home” page:

Thanks for the track count heads up.

Removing or adding via Roon an album that is on a streaming service does indeed remove/add that album on the service. If it didn’t do this, I would have zero albums favorited in Tidal / Qobuz, because I only use these services via Roon.

Roon even confirms you want this to happen when you remove it: 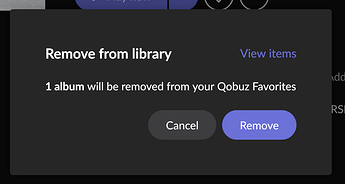 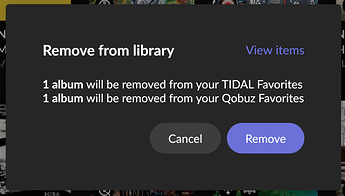 Furthermore, I can confirm it removes an album from Qobuz when you do so individually from the album detail page in Roon.

And it also works via the bulk selection method (from the albums page), if you only select one album. I wonder if there is just a bulk removal limit that I was hitting…

I just tried removing via bulk selection: 2 albums, 12 albums, 21 albums, and 41 albums. All worked - removed in Roon and on Qobuz.

So, I don’t know where the limit is, but I obviously hit it trying to remove 75+ Qobuz albums at once.

I suppose this thread can be closed, but if there is a limit, the user should not be allowed to select that many albums or maybe Roon can batch the removal requests to get around it.

OK, I stand corrected. I updated my post to get rid of the incorrect info.

Not sure why there would be a limit on this.

Possibly a limit on the api in the streaming services.