"By This Artist" inconsistencies :-/

(local albums only, no Tidal here

The above “By This Artist” is actually correct…and in line with the stated wishes of both Neil Young and Crazy Horse!!

When it comes to Neil Young, I think it can be useful to think of him in the same way as Paul McCartney and The Beatles…i.e. if you are playing a Beatles album, do you expect to see a Paul McCartney album in the “By this Artist” column…and my answer would be no

Now look closely at Everybody Knows this is Nowhere album detail screen below… here the Artist is the BAND called “Neil Young & Crazy Horse”…i.e. think Beatles and not Neil Young…and on the “By this Artist” column, you will ONLY see Albums for that BAND…hover over the Blue Artist link at the top, and you will see there is no division between NY and CH

And lastly [and this is where it gets confusing, but only to meet the stated requests of NY and CH]…look at the Primary Artist on the 2nd line…and again you will Neil Young & Crazy Horse listed as the Primary Artist

But on the line below that, you will also see that NY and CH are listed SEPARATELY [you can hover over each Artist Name and click on each]…and the difference this time is that the “By this Artist” will show Albums for BOTH NY and CR in that Column…which is exactly what you are seeing above

So, this is by design and to meet the oft stated preferences of these Artists

… and let’s not even start venturing into classical music

Sorry Paolo
Look again closely at the Rust Never SLeeps screenshot I posted above…look at the 3rd line in blue…and you will see SEPARATE entries for Crazy Horse / Neil Young…and as a result, THAT is why Rust Never Sleeps and Live Rust are listed to represent Crazy Horse…while Harvest and Peace Trail represent Neil Young

Logical “By This Artist” behaviour should be either:

But THAT is what you are seeing…as I said earlier, Crazy Horse wanted to be listed as a SEPARATE Artist on the Rust Never Sleeps and Live Rust Albums…and THAT is why they are listed separately in the Databases and Roon itself 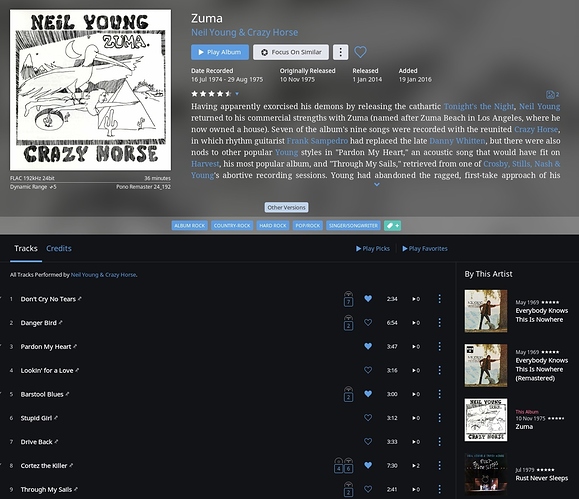 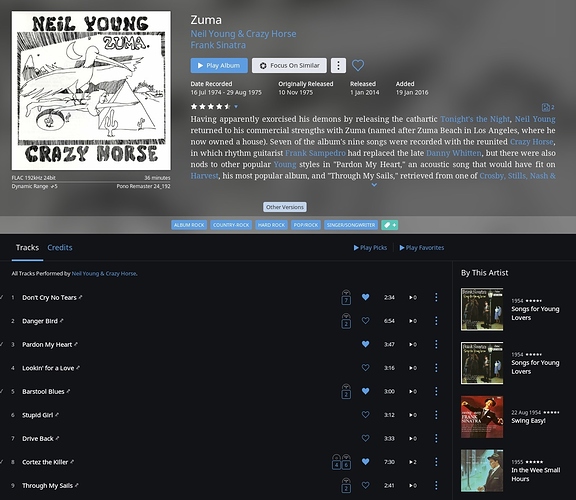 The key to understanding this is that at that time [in 1979, but not before that], Crazy Horse demanded to be listed as a separate artist in their own right…and not merely to be considered as Neil Young’s backing band…which is why they are listed separately on Live Rust and Rust Never Sleeps…but NOT on Zuma and Everybody Knows this is Nowhere