Can I listen to music on PC and other music on Pie streamer using Roon?

Right now, I am having trouble with both my Qobuz desktop app on windows (its just really bad software honestly…) I have been trying Audirvana which solves the problem, but the UI isn’t great and it comes with a cost too (7 euro / month).
Additionally, I use Volumio for my Raspberry pie streamer, but the user interface is pretty meh again, and it can be buggy (which also costs 3 euro / month). I would love to use Roon on both systems and be done with it.

On the edge to jump into Roon, but I have 1 important use case I am not sure Roon provides.

Using my current setup, I can listen to music on my computer while working, while my girlfriend uses the streamer in the living room.
Is this an option with Roon? So I listen to playlist A upstairs on my desk, while she listens to playlist B downstairs on the stereo setup. Both would be using the same Qobuz account (works right now with qobuz native app on desk and volumio on RPi)

Looking forward to finally use the software that “just works”, or at least, the internet makes me believe it does

Yep , you can do almost anything !! Any album / Playlist to any Zone. Your Work/Girlfriend example is easy peasy

The Roon Core is the driver , then any number of End Points (there is no limit but say 20) can run from the Core on your network. The only limit is if you apply any DSP (Digital Signal Processing) to the Zones in which case your core processing capability could limit if you run too many zones. Mine is an i7 - 7700 , 16GB RAM , 250G SSD , never blinks

Mine is a simple set up compared to some 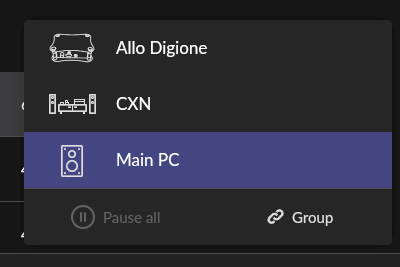 I have 3 end points

You can run any or All together

Roon gets quite exciting once you get into it , it combines Your albums with Qobuz albums in one view

Cool thanks for the reply! I have the same Digione

Interesting, so multiple songs at the same time from the same Qobuz account is no problem?

So in theory, could I also cancel my Qobuz family for a single Qobuz account then? That would make Roon a no brainer.

I am in South Africa so we don’t have Qobuz, but I have a single Tidal account and I can have music playing in the lounge via the CXN and have an iPad (acting as an endpoint as well) feeding Bluetooth speaker in the kitchen at the same time , that’s as far as I stretch it

Interesting, so multiple songs at the same time from the same Qobuz account is no problem?

Every Zone can have its own individual queue of Qobuz and/or local tracks playing simultaneously. You can also group Zones (of the same type), so that one queue can play to multiple Zones simultaneously.

Awesome thank you for the replies. Honestly, I would probably still keep multiple Qobuz accounts just because that feels fair/better somehow. But it is great to know I can play different music on my work desk and in the living room on 1 Qobuz account.

Just reading up I see I need a computer on 24/7, that is still a turn off for me at the moment (only have laptops), but I am thinking about building a work PC anyway, so I might go the Roon route in the (near) future! I don’t assume Roon Runs fluently on a very ancient machine right (like 9 years old)?

I imagine you can also play music on the Roon core computer itself right? I could build a high end desktop to work on and run Roon locally at the same time?

Sorry for these noob questions, I am reading up but sometimes asking a question is just easier…

I shutdown my Core most days to avoid power cuts and lightening strikes etc, no ill effects

The only drawback is your startup time for “instant music” . I startup when I get up and shut down before I go to bed . Works for me

Fair enough! My concern was more when I leave home with my laptop, and my GF would like to use the Digione.

On the other hand… how often does that happen…

Have a look on the forum , a popular Roon Core is an Intel NUC running ROCK . ROCK is a Roon provided Linux OS cut down to eliminate any unwanted stuff.

The size of your library determines the NUC spec . If you have a BIG library say 150,000 - 200,000 tracks the i7 , also if you intend to do lots of DSP more horse power helps. If a small library then an i3 will suffice. I would go big for ex

If you buy the tall version you can get a 2.5 in HDD or SSD in it and be a totally self contained appliance. This is in effect a DIY Nucleus or Nucleus +. ROCK is self updating etc so is effectively maintenance free, just plug into the network

Yeah that is the thing. My music library is literally 0 bytes, and for DSP I have a mini DSP. So buying a NUC just to run Roon core seems like a waste. I was under the impression you could also run Roon on a work computer. If not that would be a deal breaker for me sadly.

Honestly, I think I always misunderstood what Roon really is. And while I understand its value more now, I also see that for me personally, it is not going to be the solution (for now). I was figuring out a way to run Qobuz without spending money on a new computer, Roon seemed a fair solution, imagine the surprice when I found out I needed a new computer just as a media server

Yes, roon needs a server, and can be a resource hog. But, it is the player/UI Qobuz wishes they had, and that they need.

What spec is your laptop . does it have an SSD

You didn’t mention no local files. Roon uses a database to keep track of the metadata of your local files and any files that you “add to library” from Qobuz. The space requirement is the same whether its a local file or a Qobuz file. That library needs to be on an SSD for performance reasons.

If you are just going to use Roon as a substitute UI for Qobuz , my opinion would be that its overkill. (as you know its $120 per annum) The concept of Roon is a library manager so in a streaming only set up you would select Albums from Qobuz and “add them to your library” that way you can build the interlinks that makes Roon so good.

For a small library a reasonable laptop will work , you obviously don’t need internal storage for local files as you don’t have any.

My suggestion would be to load Roon for the 2 weeks free trial , and possible extend it for an odd month ($10) if you can’t evaluate it in that time and see just how you get on with it. It will do what you want its just whether its too complex or to expensive as a Qobuz UI replacement.

As @Mike_O_Neill suggests, try the trial (and maybe an extra month) using your current computer as the Core. Just install the standard Roon PC/Mac app which can double as a local Roon Core. That will give you a feel for how much you use Roon and if it’s for you.

But if that isn’t the case and you or your girlfriend just want to pick up a phone or tablet to play some music without waiting for your computer to boot up then as suggested above, a used Intel NUC running Roon’s ROCK OS is the way to go and can be picked up fairly cheaply (even an older NUC 5 i3 will be fine for your needs). The ROCK page has a list of recommended models. Think of it as a small $150 appliance as opposed to another computer.

My SSD is only 128 GB though… I don’t know how much data the metadata uses? But loosing more than 20-30 is not an option honestly.

I am really interested in the inter linking of music and discovery of Roon, but it seems overkill indeed to pay 120 for just that (although I would love some better UI).

Thanks Mike and Jamie for the help. This community seems great. The 150$ for a NUC might actually be a pretty easy solution, but at this time, going to explore other options first. I am in need for a new PC this year anyway, and was planning to build a top of the line AMD desktop, so at that point spending 150 on something temporary might be a waste.

At least now I have the information I need to make further decisions. Thanks again for your time!