Can Roon be configured to use a specific network adapter?

My Roon Core runs on a Windows 10 box with a wired connection to my network. The Windows machine also has a wireless adapter so that I can use the Roon player on other devices that aren’t wired to the network.

Is there a way that I can configure the Roon Core to always use the wired connection, so as to eliminate streaming errors due to inconsistency of the wireless connection?

If it’s plugged into an active ethernet connection, it will always use that, not WIFI. Your other wireless devices are connecting to your router via WIFI, then to your Roon core via ethernet from the router.

As Jim says it will be the wired connector that wins .

Unless I am wrong the wireless adapter is simply an alternative way of connecting to your router if you do not have an ethernet option eg if the layout of computer and router don’t permit.

For any general purpose computer networking (Roon included) the connection to the router should be ethernet as it will be far more stable , the router then handles any wifi requirements from there on . the computer wi fi would not for instance communicate with your phone , the router would.

That’s the basics of domestic networking unless you have something special.

Thanks, Mike and Jim - my setup is pretty standard, I just wanted to confirm that the Core machine will use the wired connection.

If there is any doubt you can disable the wireless adapter.

Every OS has a way to prioritize network interfaces. I think on Windows it requires messing with the route table but by default Windows should use the wired one which is what you want anyway.

you can disable via control panl / settings

This is mine, if there were a wireless adapter it would show here. I did use one MANY years ago and it did . If you have \both you can disable one or the other 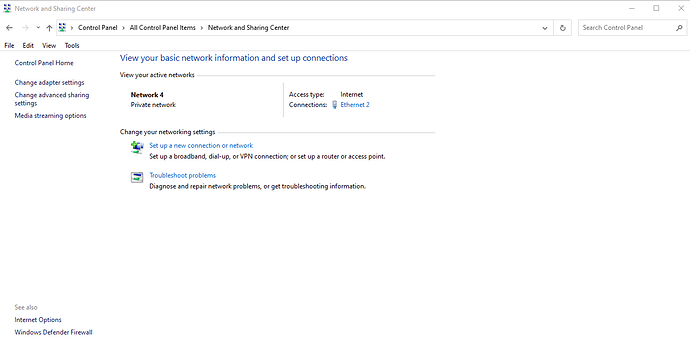