Can Roon default to non-MQA version of Albums

Apologies if this is the wrong place for this question.
I’m wondering if there is a way to set Roon so that it defaults to the non-MQA version of TIDAL albums ?

Limit the quality to HiFi. Done.

Do I adjust that setting in Roon or Tidal?

@support maybe you can assist?

That’s odd, if I switch between 16/44 and MQA, the output changes as expected. The change doesn’t start until the next track plays, so it’s not instantaneous.

It may say MQA under the album cover but the track stream will not be MQA if you’ve changed the setting from Masters to Hi-Fi. Check your Signal Path.

Hi @Trevor_Nathan – Can you share a screenshot of your TIDAL settings in Roon?

If I manually choose an album in Roon from Tidal, it nearly always will be the MQA version if there’s one, and it will play but you’ll get the embedded FLAC version to actually play. Of course I can manually choose Versions and select FLAC but I’d rather not have to.

If Roon Radio picks the track, it does seem to consistently pick the FLAC version.

I would like for Roon to not present MQA titles at all when I have the service set to Hifi.

If I choose a Tidal album on my Naim streamer, even if it happens to be an MQA version, Tidal sees that I’m using non-MQA hardware, and sends me a non-MQA lossless stream. I’m pretty sure Roon does the same if you have it set to HiFi quality, in which case it doesn’t matter if you click on an MQA album or not. I’m sufficiently suspicious of MQA as an organisation that I can sympathise with your preference, but my feeling is that it doesn’t actually matter that much. But if it does to you, as I said, there’s always Qobuz!? 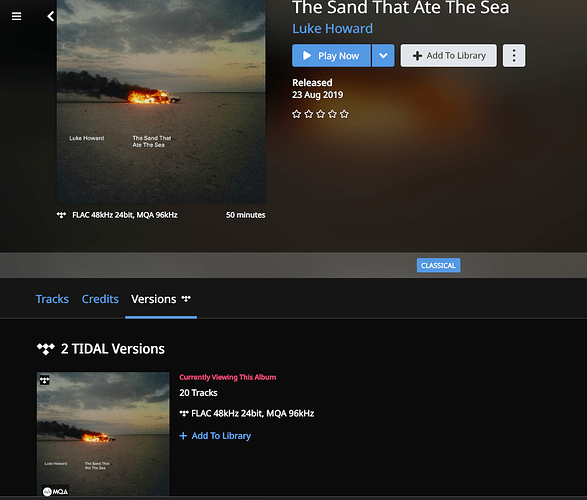 Roon shows you what it is playing.

Thank you for contacting TIDAL Support.

My name is Ashely and I’m happy to help you!

I sincerely apologize for the delay.

When you select HiFi as the streaming quality within settings, your content will stream as HiFi - FLAC 1411 kbps - Lossless (16bit/44.1 kHz).

When you select Masters within settings and select a Masters track, it will stream as Masters.

… but you’ll get the embedded FLAC version to actually play …

That doesn’t make sense since FLAC is the container and if it were a Master it would include the MQA signalling. It does not: the Signal Path clearly shows that the FLAC stream contains standard lossless 44kHz 16bit.

Sorry for my confusion, what happens if the only version is an MQA version.
In the screenshot, there only seems to be an MQA version of the album, but the signal path says its playing FLAC 44.1
Is it somehow “downsampling” the MQA version or is it accessing a “native” FLAC version that doesn’t show as being available? 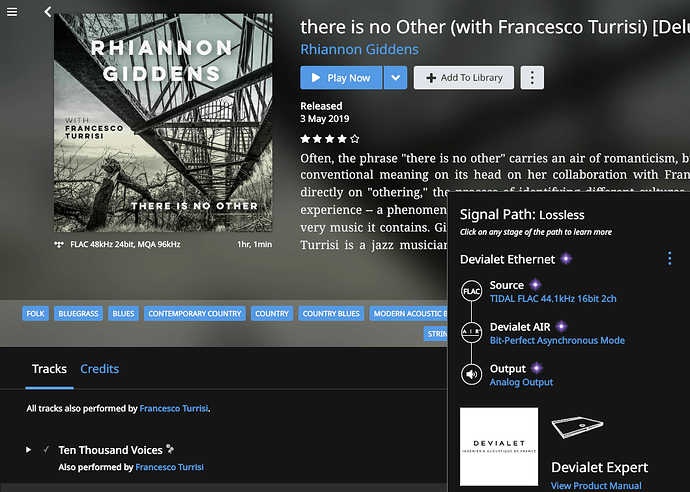 17 posts were split to a new topic: Mytek Brooklyn not seeing MQA

If you believe Roon’s Signal Path it is playing a 44.1 kHz 16bit 2 ch TIDAL FLAC file. No mention of MQA anywhere in the Signal Path.

Whether it is “downsampled” or another FLAC file that TIDAL has but does not give users access to may be irrelavent since it appears to be what someone gets today when they disable streaming of MQA content. I did check TIDAL and there are alternate copies of her other three Masters albums. The newest of the other three is from 2017 so maybe there is a long delay before the non MQA version is made available.

Someone more knowledgeable than me may be able to tell you the origin of the 44.1 kHz FLAC file Roon is playing.