Can someone else check this on Tidal?

Yazoo’s sophomore release and every second song seems to be at a much lower volume than the previous one and then the volume increases for the following one, very noticeably. 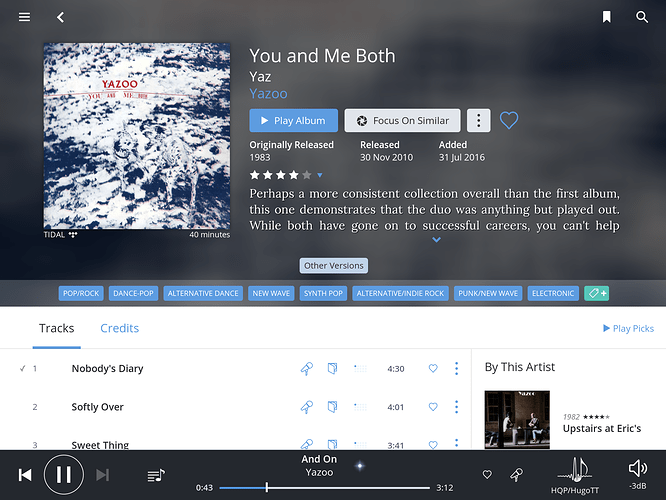 Here’s a perfect use for those lovely sharing features in Roon…(v2?)

Had a quick skip through tracks (can only listen quietly right now) - volume levels seem a bit different but not ‘in my face’ which tracks were loud/quiet?

Probably haven’t heard that album since the 80s.

Try the first and last track, the volume of the last track is significantly lower.

It makes the album difficult to listen to and like you it’s a long long time since I heard it, great stuff in reality.

I found tracks 1,4,7,9 and 10 to be normal volume and the other tracks to be markedly softer. Anyone got a local version to compare ? Could be shockingly bad mastering.

Edit: Can’t see anything online about the mastering, and I would think it would be there. Maybe we can ask @palbratelund to see if Tidal can find a better version ?

It’s like it’s a mix of 2 different masterings, I don’t think a school kid with a mastering for dummies book could get the eq off by such quanta.

I own the original 80s CD and can test that tonight when I get home.

=========
Playing the CD now, all the tracks are fine, none are louder or softer than others. I also own the original vinyl pressing of this and Upstairs at Eric’s. That one has the sticker covering the “oo” because they had to legally change to Yaz in the states.

This isn’t scientific, but I utilized the volume leveling function on Roon, and noted a pretty wide deviation between tracks (as follows from Tidal)

This is what adjustments are made to each track to provide a volume approximately even for each track. I listen a lot late at night so this helps especially using the radio mix…

@andybob - you have good ears! Your assessment matches the volume leveling numbers I came up with.

Thanks SJB, Daniel and Robert,

Sounds like something wrong with the mastering on the Tidal version. Let’s see if @mike or @joel can take it further.

Sounds like it might be a mishmash between two versions, for instance if tracks that are popular get remastered and delivered on new compilations - and ISRC match could mess things up and you would try to keep only one fileset per track (as long as identical, but somethings things go belly up).

Will notify my old colleagues about this album and see if they can get a redelivery.