What can be wrong?

Can you post a screen shot of Roon’s signal path. 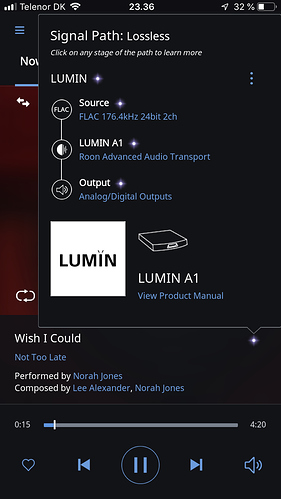 I think it is a DTS file.

When I searched for this album on Tidal I found an MQA version which plays fine and a CD Quality version ( 44.1 kHz 16 bit ) which also plays fine. 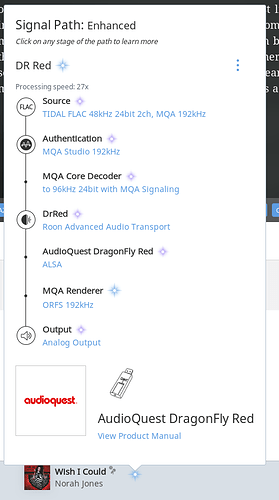 I did not see any versions that were 176.4 kHz 24 bit like the track in your Signal Path which made sense to me since as far as I know the only resolution above CD Quailty ( 44.1 kHz 16 bit ) that Tidal supports is MQA. Since it appears you were playing a track from your local library and not from Tidal or Qobuz it would be helpful to know where you got it and what its native format is. 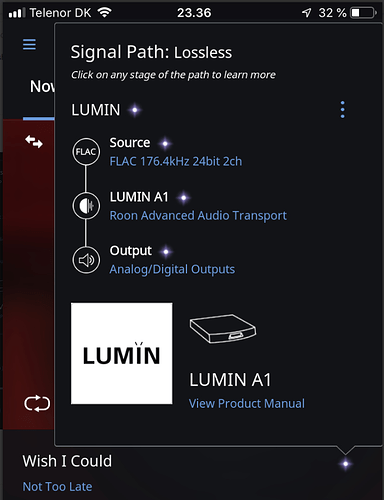 Based on a quick look at the A1’s specs it should have no problem playing a 176.4 kHz 24 bit PCM file which would seem to be confirmed by the fact that Roon is sending the file directly to your A1 and not down sampling it.

If @Roony is correct and and the actual format of the track is DTS then based on the A1’s specs that could be the problem since the A1 does not appear to support DTS.

Please confirm that when you use Lumin app to play the same album locally (not Tidal), you see DSD in the codec in Lumin app and/or front panel.

If that’s the case, you’re playing a DoP file. Roon supports DoP as an output format but does not support DoP file. (Lumin app supports playback of DoP file as well.) There’s a way to convert DoP file to DSF file such that Roon can play it, but let’s confirm that’s what you’re experiencing first.

I found the problem now…

I guess lumin was playing the 44,1khz file from tidal and roon was trying to play the corrupted sacd.

I now also discovered that there is a “version” button so that I can see all the versions (MQA, 16 bit, 24 bit, sacd) in roon… very nice feature