Can you identify this album..?

Sorry if this isn’t the right place to ask for an ID, mods: please move to the right section…

I don’t have much to go upon, but I’m looking for an /hard rock/indie album that was possibly released somewhere between 2017-2019, likely 2018.

From, my no doubt faulty memory, the album cover was predominately red, featuring an androgynous face or figure.

The band are pretty well known (nothing really obscure) - from the US, possibly the album was their 5-6 release. And I vaguely recall something from the bio about the singer being imprisoned, (manslaughter?) But I’m not sure.

Musically, my memory of the album is hazed by alcohol, so I can only describe it as an album which is transgessive, bass heavy, but rhythm and lyrics very much to the fore.

I’m sorry it isn’t much to go upon… I should have paid more attention to the artist and album name.

Thank you for any suggestions…

Well, I can only say my memory is shot to pieces 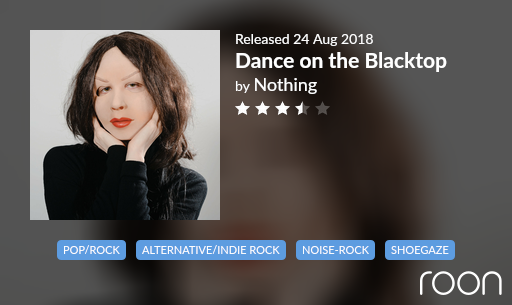 Not a lot of red on the cover, although the singer - Domenic Palermo - was imprisoned, he was later brutally attacked after a concert and diagnosed with a degenerative brain disease.

Memory is such a tricky friend.

From, my no doubt faulty memory, the album cover was predominately red…

Maybe you did see a red cover at the same time, i.e., the Downward Years to Come EP? Or you imagined it!

A very good album, I like Nothing a lot - even if my wife always says she finds the cover disturbing… Other Nothing stuff is very good, too (Tired of Tomorrow, The Great Dismal)…