I’m trying to activate USB for output from Roon. I got this in Settings/Audio:

The most common cause of this behavior is running Roon from a backup made on another computer. Roon generates a unique identifier upon installation that allows other Roon-aware devices on your network to keep track of who’s who.

I recommend that you uninstall and then reinstall Roon on the affected computer. If this computer does not host your Roon Core/Database, you should be able to do so without worry.

I always recommend performing a Roon Backup before troubleshooting, so double check and make sure that you have a recent backup you can roll back to.

I am reluctant to uninstall Roon from where it’s running (and has been running for a long time). I do not recall applying a backup to the core where the backup was made on a different computer.

I have gone ahead and enabled diagnostics mode for your account and what this action will do is next time your Core is active, a set of logs will automatically be generated and uploaded to our servers for analysis.

In the meantime, it would be helpful if you could provide some more details regarding the issue you are seeing:

Do I need to stop and restart Roon core for you to get logs? That is, core has been continuously active all today (and earlier).

No need to restart the core. It looks like they’ve already arrived. I’ve filled a ticket with the QA team for further analysis.

The QA team would like you to disable the Realtek Audio Driver on the MusicServer computer. The Realtek driver has a bug which prevents Roon from being able to see other audio devices correctly.

Additionally, they noted that Remote Desktop solutions will often try to re-route audio to the remote PC, messing with the audio subsystem of the PC under control. Try fully disabling the Remote Desktop software, rebooting, and then plugging the DragonFly into the PC (assuming you have Roon/Roon Server in your startup items).

It may also be a good idea to clear out the RAATServer cache on both PCs. To do this, stop any Roon instances from running and then type %localappdata% into the address bar in Windows explorer. You should see a directory labeled “RAATServer”, delete it.

I did all these things. I still fail (“Device Initialization Failed”) when I try to activate the USB Audio ASIO driver (on the system where Roon core runs). 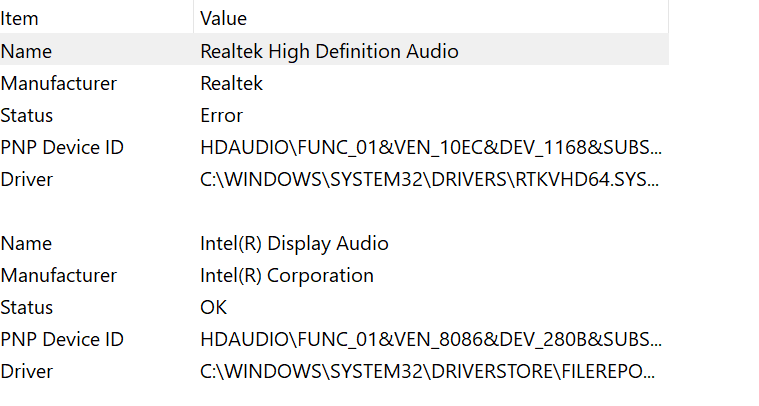 You’ll have to tell me – from logs? – what might be the device behind the driver.

I would like to suggest a more advanced troubleshooting technique here, which is to re-generate a RAATServer instance.

Can you give that a try and let us know if it helps?

I still get “Device Initialization Failed.”

In your previous post, you indicate that you successfully activated your Dragonfly DAC, which was the primary concern here.

Do you have any other USB DACs connected to your core? We are not exactly sure what the “USB Audio ASIO” driver is, it could be a previously installed driver for a DAC you no longer use.

The logs wouldn’t indicate what devices lies beyond the driver, but if you don’t have anything else connected other than the Dragonfly, then enabling this additional ASIO zone is not necessary.

I wanted to have Roon core supply music via USB output. Is that not possible?

As per your previous message you indicated that the Dragonfly USB is working properly, correct?

This is a USB output. The question here is what exactly is the ASIO zone you’re trying to activate? If there is no other USB audio zone plugged into to your PC, what are you trying to play to?

OK, I didn’t know what I was doing. (I can plead only that I thought Roon might provide a road map of how to proceed. But it’s my mistake.)

I just plugged a USB cable between the PC running Roon core and my pre-amp. Then I successfully activated the USB Audio ASIO driver, played a bit with its setup parameters, and finally had Roon delivering music to the pre-amp via USB.

Sorry for all the trouble I caused.

No trouble at all, just glad that we could clarify the issue

Until next time, take care.