I have read the article on how to set up a DB (not music folder) backup but I still cannot specify or “point” Roon to my MS OneDrive “cloud” folder. I see others have had similar problems with iDrive, but I live in a PC world… Anyway, the OneDrive folder just won’t show up as a valid backup option. What should I do? Thank you in advance.

If you can’t get OneDrive to work, Dropbox has been working well for me. Depending on the size of your database, a free subscription might suffice.

That’s too bad about OneDrive, But thanks for the advice; I try and limit the number of cloud accounts I have to juggle, but I might do DropBox if I have to. Or Roon could just allow us to point the backup where we want, which seems like a better solution… Solomon

Maybe you can try to share your OneDrive folder on the network and add it as a network share under backup.
Your OneDrive folder probably lives under C:/Users/[username]/OneDrive.
This article might help: http://www.geeksquad.co.uk/articles/how-to-set-up-file-sharing-on-windows-10

That seemed like a great idea. But, when I made the network share folder (under HomeGroup) and tried to save to it, I got an Invalid File path error when I tried to backup. Weird.

I have no problem using OneDrive for my Roon backup both from Mac and PC (Windows) cores.

That seemed like a great idea. But, when I made the network share folder (under HomeGroup) and tried to save to it, I got an Invalid File path error when I tried to backup. Weird.

Hmm, perhaps you shouldn’t use Homegroup? It’s always been problematic, and I read recently that Microsoft are going to drop it in Windows 10 going forward.

Since I’m now on ROCK, I needed to make the OneDrive folder on my Windows 10 server exposed as an ordinary network share (not via Homegroup). That’s worked without problems. 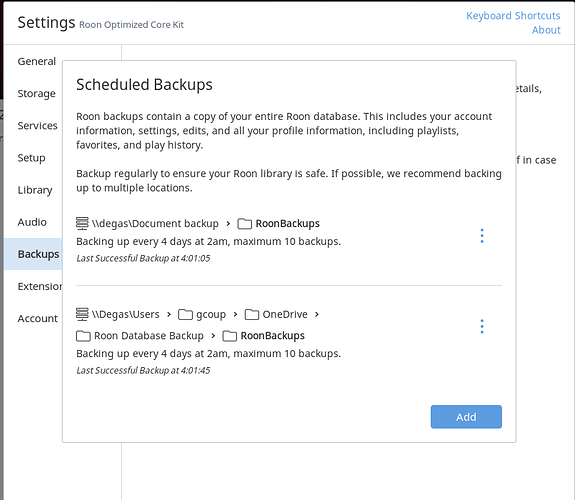 Maybe I have to avoid the Homegroup? Anyway, I’ll give it a try. Thanks for your help.