Running ROCK OS. Not sure the build number because I can’t access the Roon.

Ethernet Connected to Verizon Fios modem. There are switches in the network. I can provide more detail if necessary.

I can’t access Roon. On my devices (Mac, ipad, Pixel, I I get a message that says "waiting for Remote Core, among other things. See attached photo for photo of Roon messages as it is starting up (I couldn’t figure out how to do an actual screen capture)… 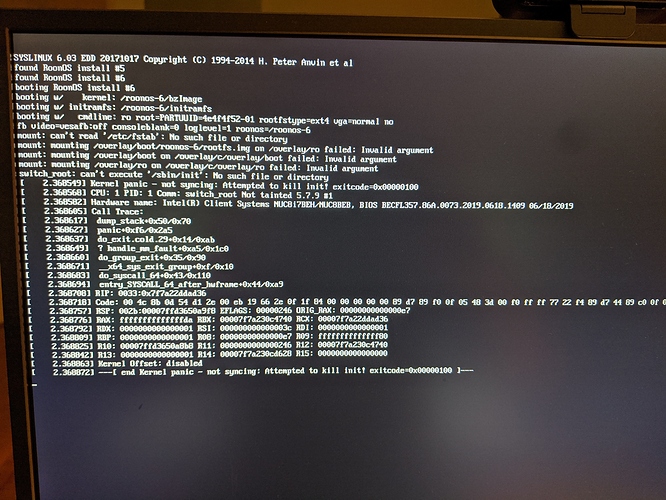 I just wanted to check in and see if you were able to get things up and running with the steps that Rugby linked. Is everything working for you now?

Dylan–No, I have not been able to get it running. Via my MAC I downloaded the image file onto the USB that I normally use for Roon backups (this USB is normally plugged in to a USB port the NUC). But I’m not sure what to do now. When I restart the NUC with the USB containing the image file plugged in to the NUC, I can’t figure out how to open the image file. I just the same screen that I posted in my initial comment. So there’s clearly a step (or steps) I’m not doing to get things up and running again.

Via my MAC I downloaded the image file onto the USB that I normally use for Roon backups (this USB is normally plugged in to a USB port the NUC). But I’m not sure what to do now.

Geoff is correct — If you use Etcher, as mentioned here, does that work for you?

Etcher did work, albeit with one complication. The flash drive I used to accomplish this task was the same one I used to back up Roon. Now Roon (or the NUC) can’t seem to backup to that drive any more. I’m not sure why, although I gather it has something to do with the backup directory not being available (whatever that means).

And naturally, the Roon backup is directory no longer available. It’s got overwritten.

So how to resolve the problem. FWIW, there was, until moments ago, a Roon backup folder on the drive, that appeared to have data in it. But I deleted it and tried to backup again and got a similar (but not identical) message

I would re-format the drive (using your Mac?) and start afresh. See here for recommended formats to use.

Hi James — Geoff is correct, you should re-format the drive and then things should work for you.

Ok, that worked. Thanks to you and Geoff.