Yesterday November 20th, The Deluxe edition of the UFO 1979 live album ‘Strangers of the Night’ was released on all streaming platforms. Since last night I have been trying to add the album to my Roon collection. When I click ‘Add to Library’ Roon tries to add it and then I get each of the following messages:

Then when I go back on Tidal, via Roon, The UFO album is still there. So the message is obviously wrong.

So when I go and look after 3 hours if the album has been added, it has not.

I can play the album in Tidal, in the Tidal app, in the ‘Tidal’ section of the BluOS app and in the Tidal section of Roon. I can also play it on Apple Music and Spotify. I just can’t add the album to Roon.
I have since added several albums from the Roon Tidal section to my Roon Collection. Only this UFO album gives me problems.

Yes I did restart, checked my connections and all the other first line support desk solutions.

I would be grateful if someone would try and add this album, from Tidal, to their collection.
That would be very useful to me. 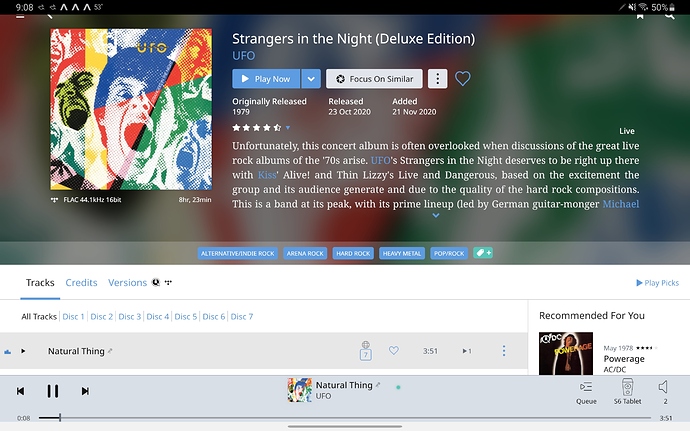 Yes it is a monster album.

Thanks for trying, and succeeding.

Btw, I don’t know if it is ‘solved’ yet. I first have to see if I am successful.

I’m getting this the new release of Delicate Sound of Thunder. It will
not add to my library, message says album deleted.
Has anyone any thoughts on this please?