Mac OS 10.10.5, Mac Mini, Remote v1.1 instance to Roon Server. Nether able to Disable nor Remove a watched folder. Just get the Roon icon pulsing away and nothing happens. Before it was instantaneous? Update–same behavior on a MacBook Air Remote Instance 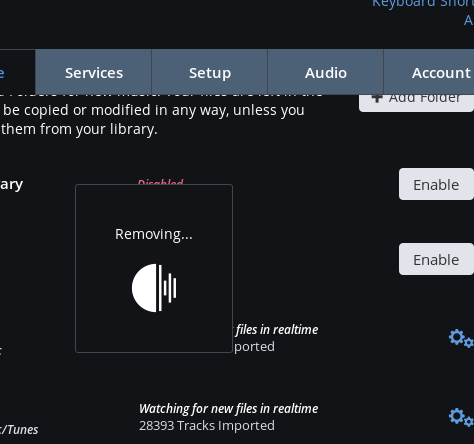 Hi @bebop57, I’ll be in touch via PM soon to grab some logs from you so we can look into this further. Thanks!

Thanks, got the PM. Kind of hard to follow the instructions when you get this:

If I was not connected to the internet, how could I post here?

And now a whole other problem. Once I quit a Remote instance, the only way I get it back is quitting it again, rebooting RoonServer then relaunching said remote.

Wiping the machines clean of roon and roonserver, renaming the music volume, then reinstalling provided a fresh start that got rid of this behavior.