The following file can’t be found in Roon. I rescanned, checked Skipped Files and looked it up by path:
https://drive.google.com/file/d/1m5syiT5Xf8SWn0yzdsmUab9CMf7lqAmu/view?usp=share_link

It shows up in Apple Music:

It shows up in Finder:

But not in Roon

Is this your local album or from a streaming service? Edit: local I guess. Did you check that the file tags are correct?

Is the album fully identified in Roon? I found a few of mine that were not fully identified and it put the tracks in a weird order and did not have a few of them listed correctly or even “in” the album but by themselves or way out of order. YMMV You might try looking at the album editor and see what it looks like for each of the tracks?

If you haven’t already, you might try searching for the track itself??

Another thing I have seen is that if you also have the Tidal album it sometimes hides the local one. Not sure if this would help, but might try turning on “show hidden tracks and albums” in settings/general. I don’t recall if i have seen it for individual tracks or just whole albums, been a while since I had this issue.

it’s a local album ripped off the same CD as the rest of the concert. I’d assume the the tags were the same.

Thank you for the advice. I looked at the Album Editor and the other tacks are in order, I have show hidden tracks on, and I searched for the track. The file is from a limited edition CD hat isn’t on Tidal. It looks like Roon has it in the database, but it just can’t find the file and has no way for me to select the file off my drive

Have you verified the tags are the same and can play the track outside of Roon?
Did you use any kind of verification when doing the rips (accurate rip,etc)?
You might try re-ripping that one track and replacing the one that is in your library?
Maybe try FLAC or another format besides m4a?

Yes, I can play it in Apple Music. I also deleted the files and re-ripped the disks and the file is still not appearing.

The track shows up for me.

I’ve found Roon can get confused with the Grateful Dead as the metadata can vary between sources: CDs, Streaming, Official downloads etc.
It gets even weirder with songs that merge, for example, Scarlet Begonias>Fire On The Mountain
Sometimes that will be 2 separate tracks or 1 track with varying delimiters.
I ended up manually tagging all mine (for consistency which took weeks) and setting Roon to use metadata tags.

If you can’t get this figured out tag me in a reply and I’ll have a look at my metadata if that will help.

Sorry if this was already mentioned but have you checked to see if that track is showing up as a separate album.
That happens too.

I appreciate everybody’s input here and I found a solution to this problem.

(1) In Finder, I selected Open With>Roon

(3) I merged Albums according to the directions at this site: 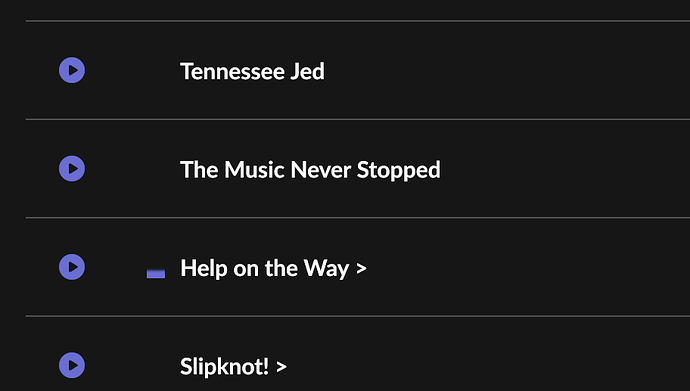