I’ve been unable to correct an album where the art AND track names are correct but the tracks themselves are from another album. Ive tried the Album Edit feature but still wrong. The album plays correct using my iPad w/mconnectHD/NAS/Diresctstream Bridge (i.e., over LAN, no Roon).

Hey @Rogerdn – can you let us know a little more about how the tracks look on disk? Are they numbered, in a folder, accurate tags, etc?

Mike, all track Names in Roon are correct and no missing or extras, but the music tracks are from another album. For example a Sheryl Crow album has the right art and track names but the tracks (the music) are for a Madonna Evita album, or have I misunderstood your reply ?

I have seen something similar when using the “merge album” tool. Is that something that you have used ?

When that happened to me the only thing I could do was delete the album and restore it from backup.

Andrew, no don’t believe I have used it, yes I’m thinking the same about deleting. Question, Roon’s Delete Album says it will be removed from my HD, in my case my NAS, so I will need to rip it again correct ? But except for Roon it plays correctly.

all track Names in Roon are correct and no missing or extras, but the music tracks are from another album

Can you try clicking the little pencil on the right side of the album screen, then choosing Identify album? I’d be interested to see if you get a more accurate result there.

Also, can you right-click one of the tracks, then click Track Info, then Tags – I’d love to see a screenshot of the tags popup.

Let’s see if we can figure this out before you go through the trouble of re-ripping CDs ok?

I had tried the pencil/Album/Identify before posting and it found the album but unfortunately did not fix it.

Can I get the Tag info screen using my iPad or just the laptop ?

Sorry @Rogerdn – can you give me a little more information about what went wrong?

Can I get the Tag info screen using my iPad or just the laptop ?

Either one will work.

Mike, it just did not fix the tracks, i.e. nothing appeared to happen. I believe I found the right ones, did a save and even a rescan but nothing changed.

I have tag screenshots but they won’t paste in the thread, in past I emailed them to you but using the address in my add book they are returned undelivered, how can I e mail them ?

You can upload jpg’s using the bar with the arrow on top in the toolbar above the typing area in the editor.

Andrew, got it Thks .

Mike, here are the Tag shots of a track you wanted to look at. 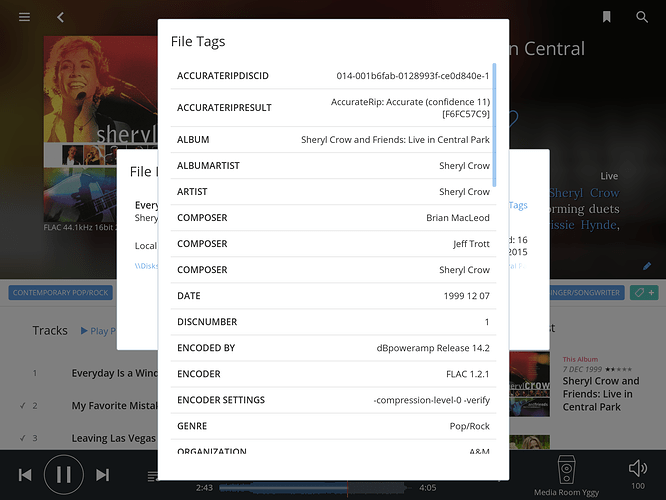 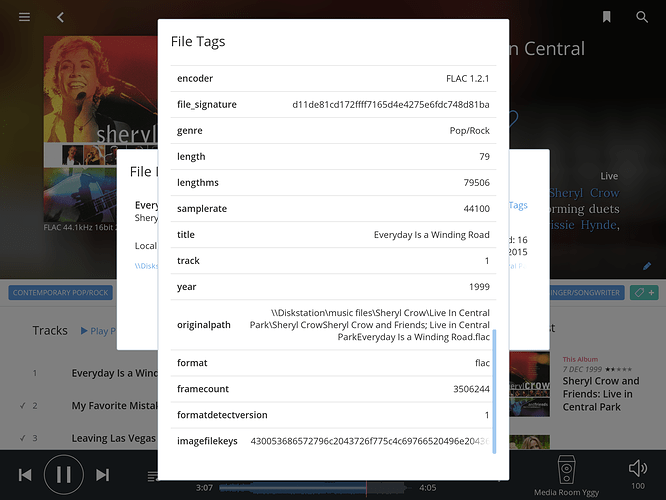 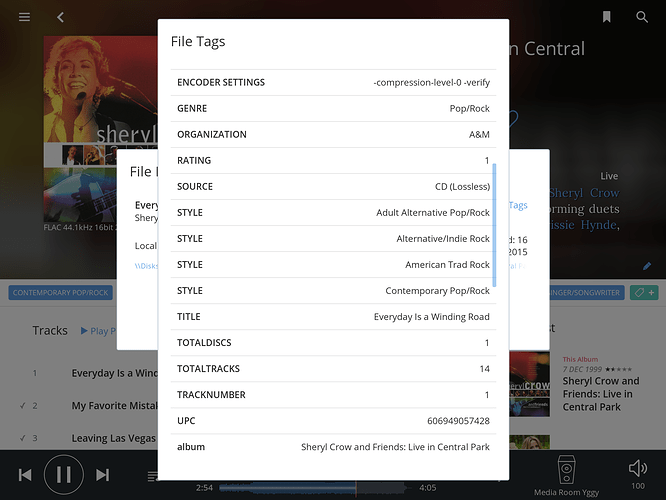 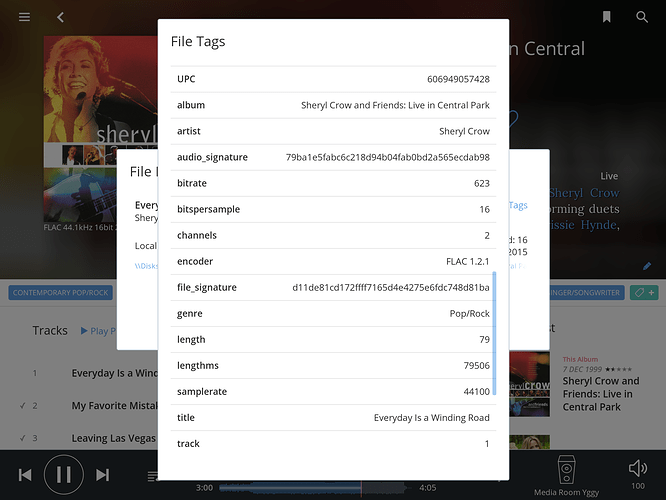 Thanks @Rogerdn – that’s helpful but I must be missing something.

the music tracks are from another album. For example a Sheryl Crow album has the right art and track names but the tracks (the music) are for a Madonna Evita album

It looks like the file name, files tags, and track name displayed in Roon all refer to this as Everyday Is A Winding Road. Is that not correct?

That’s the name of the track I selected and the album name, ect all match the art. The problem is when I listen to the tracks they are another album, all Mondonna/Evita tracks, weird for sure. I was going to rerip it but now can’t find the cd, but it’s no big deal I seldom listen to it.

Here is a tag from one track from the Evita album, i.e. the music that plays instead of Sheryl Crow’s. 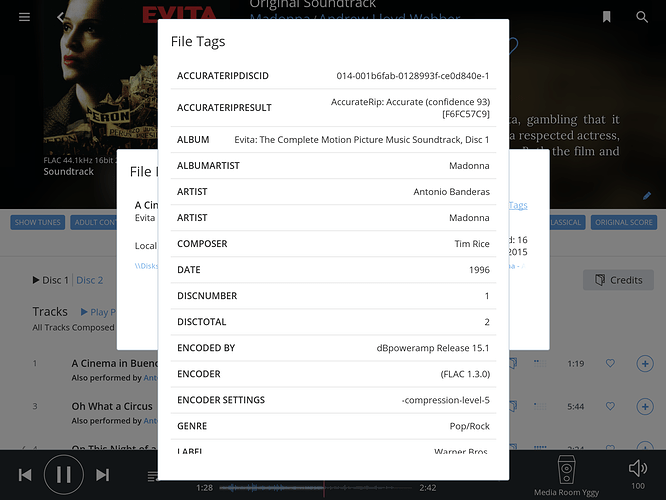 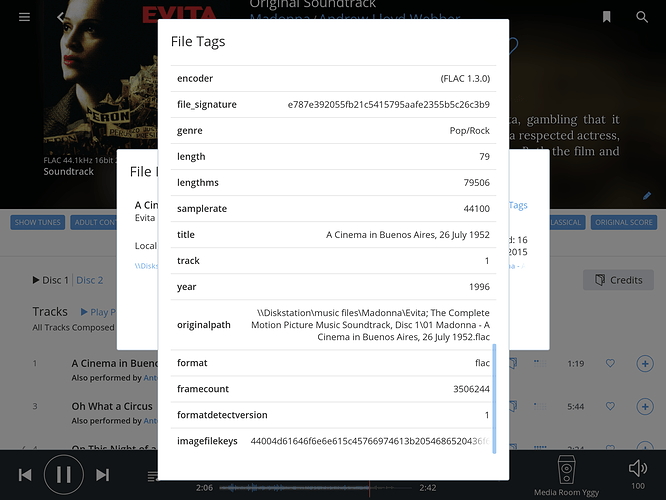 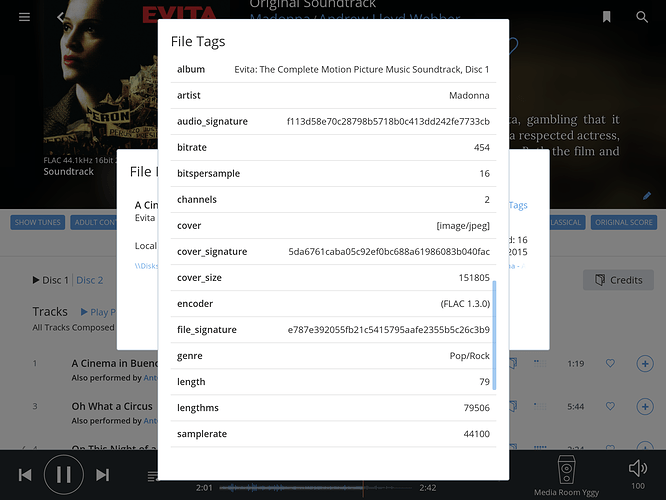 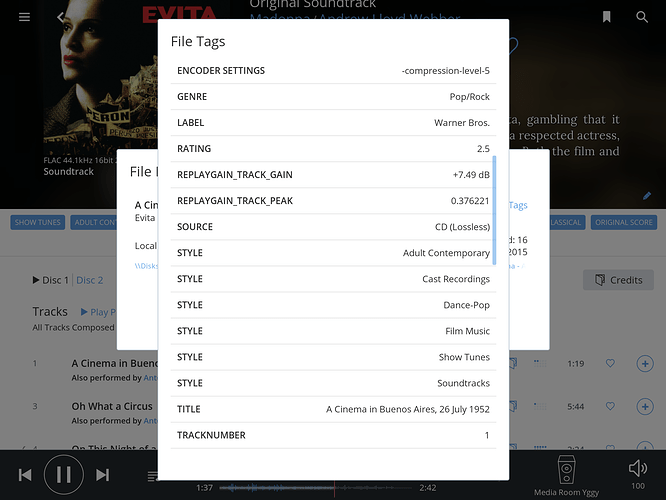 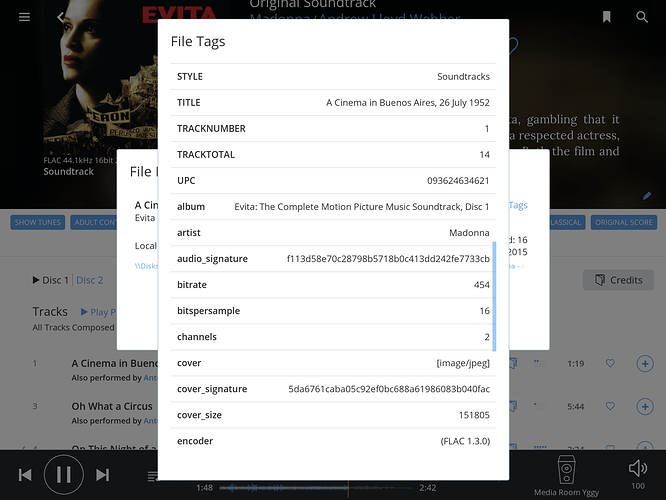 If you want to drop this it’s fine with me, the cd will probably show up at some point.

Maybe try opening the FLAC file listed in originalpath in another application? My guess is that these files are tagged incorrectly.