Hi Hoping for some advice . I have an Onkyo TX 8270 receiver , and a growing collection of High Res Music files stored on a Synology NAS drive, I am also a Tidal masters subscriber.All these work perfectly well on the Onkyo but I wanted a more sophisticated interface than the Onkyo Controller app . So bought a Roon subscription - was then very frustrated that Roon downsamples to 48Khz for built in chromecast - as I have in my Onkyo -so reverted to an external chromecast disc and got to 96Khz . But still wanted to get the full 192 Khz - so purchased a Digione/Rsapberry Pi combination

But with my 192 Khz files from my NAS drive there is no sound , Roons signal path says that everything is working fine 192 Khz is being delivered . Although 96 Khz files and below play fine

I have installed Ropieee on the SD card on the Raspberry , which is ethernet connected

Is either Ropieee or Digione limited to 96Khz

I bought my DigiOne Player (not the signature) pre-assembled from Allo with the DietPi image. I get 24/192 no problem over the Coax out. 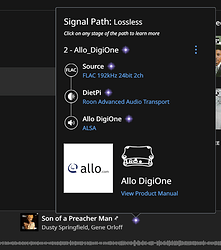 Yep, can confirm 192kHz/24bit with DigiOne Signature and RoPieeeXL: 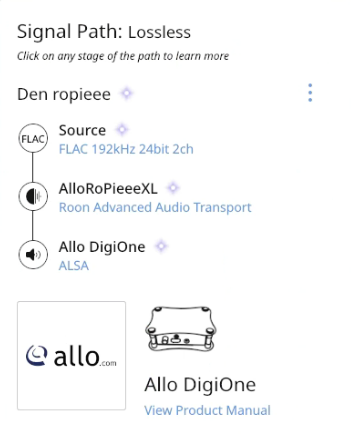 How did you stream high res before the RPI/DigiOne combo? Did you use the coax input?

Your receiver doesn’t support 24/192 on the coaxial input, sorry.

Hi the Onkyo has an Ethernet port , so through my internal network run off a router.

One update have changed the MQA settings from renderer only to decoder and render and now getting full 192 kHz via Tidal , but still no sound from 192 kHz files from my NAS
Cheers

What’s the format of your high res files?

Seems like your receiver doesn’t support remote flac play either. Could explain the missing sound when playing flac from your NAS. 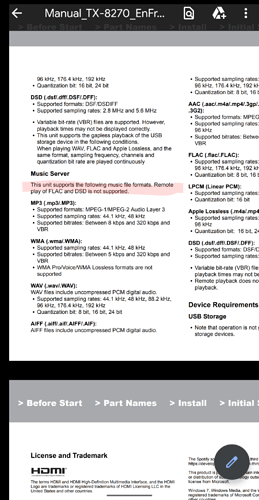 Seems like your receiver doesn’t support 24/192 on the digital inputs, nor streaming flac from a NAS. Does it support UPnP? If so, the squeezebox to UPnP extension might give you 24/192 with Roon.

The manual states otherwise, but there could be a firmware update or two between the release of the manual and you contacting Onkyo Support. On the other hand, it wouldn’t be the first time a customer support representative is misinformed.

These files are 48kHz unfolded to 96kHz. The 192kHz is derived from upsampling inside the Onkyo’s DAC, so it would seem that 92kHz is the limit on the coax input.

Does not support 192 over any digital inputs. It does support it via HDMI from an HDMI source. So you might try setting up a computer running roonbridge and connect via HDMI in.

Or get a DAC which supports the DigiOne, like a Schiit Modi Multibit and output analog from the DAC into the Onkyo.

The supported formats are listed in the instruction manual.

Hi Daniel
I have checked with Onkyo support who stated that there is no restriction, but as someone else has pointed out the help desk may be misinformed
But heres the thing when initially playing Tidal 192 kHz the Roon Dsp was downsampling to 96khz , when I checked the settings it had defaulted to MQA decoder only , when I changed it to render and decoder it plays 192 kHz files fine.
Someone else had suggested that Roon is doing the intitial unfold and Onkyo the final, and hence it only worked with 96 kHz coming in via the coaxial
But if I understand my settings correctly Roon is doing all the unfolding prior to the Onkyo and hence 192 kHz in successfully coming in via the coax input of the Onkyo
Am I wrong
Appreciate everyone’s help
Derek

Roon is only capable of doing the first unfold, the second one is done by your receiver.