Can't get Roon to not convert DSD to PCM on Squeezelite

I have Squeezelite installed on a Linux/Atom machine. I have LMS disabled.

When I try to stream DSD from my Mac mini where Roon core is installed DSD is converted to PCM no matter what settings I make. Any idea how to stream DSD as DoP?

Screenshot isn’t loading properly. Use the uploader (bar and arrow up) tool.

Have a look at the KB Audio Setup Basics page and check which DSD playback strategy is selected.

OK I’ll try the screenshots again. I read the KB Audio setup basics but I can’t find the two tabs general and Playback. They seems to be combined on my version! 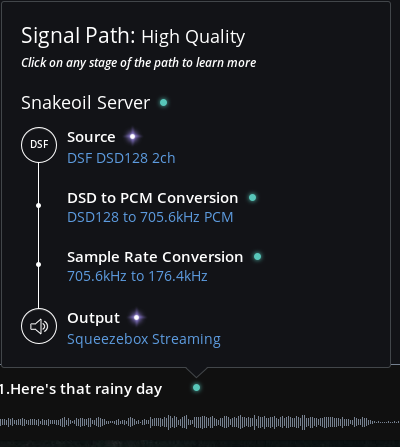 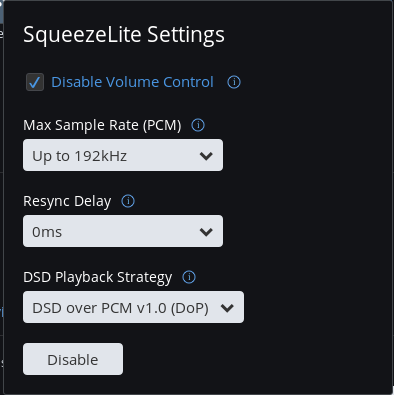 That’s the setting. I think the Squeezebox zones have more limited options.

Are you able to play DSD content OK on the Linux/Atom machine outside Roon ?

I’m fresh out of ideas. Let’s see if anyone in the Squeezebox section here can think of something. If not we’ll take this to Support.

I can confirm I was able to pass DSD though Squeezelite to my Vivere DAC using Roon. Those settings look fine. It’d be interesting to see the DAC settings.

The DAC doesn’t really have any settings that would stop DSD playback.

To check it still plays DSD I switched LMS back on on my Linux/Atom machine and it plays DSD from the internal SSD.

Lets drop some flags for @mike and @brian and see if they can help.

In order for DoP playback to work via Squeezelite, two things must be true:

Since you have the second one in good order, I’d focus on troubleshooting the first. It will probably work best if you point Squeezelite directly at the ALSA hw:* device.

(The two-tab settings screen in Audio Setup Basics is the configuration screen for connected outputs. Networked outputs like Squeezebox, AirPlay, Meridian, RoonReady have their simpler configuration interfaces, as you’ve found).

A side note: we officially support Logitech hardware devices, but not software Squeezebox emulators,because we have a native software-based endpoint solution of our own on Linux: RoonBridge. I think it’s likely that you can make it work either way, and I’ve seen Squeezelite play DoP content properly before with Roon, but if you can’t figure it out, RoonBridge might be worth a shot.

I’d like to try RoonBridge but I’m using a 32 bit OS so I don’t think Roon is compatible.

That’s correct, RoonBridge is 64bit only; does that hardware support a 64bit OS?

It would be nice if Roon released a 32-bit Linux version!

To check to see whether my Linux PC was the problem streaming DSD from Roon I moved my Squeezebox Touch to the main system. It too does not stream DoP despite setting it to do so.

These are the settings for my real SBT (not Squeezelite on my Linux PC). The result is the same as when I attempt to stream DoP to my Linux PC.

I have EDO on the SBT. 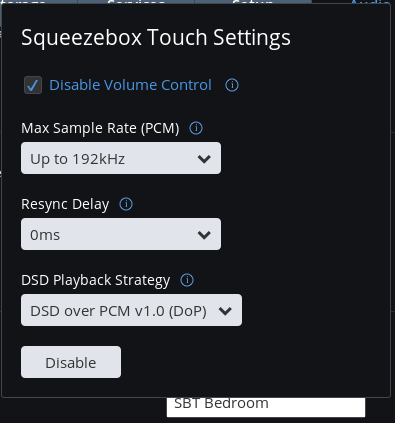 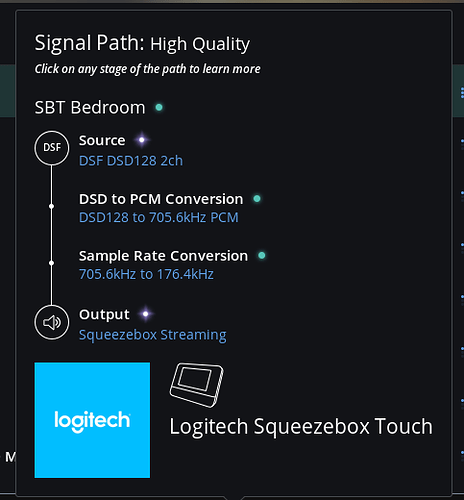 You need to have LMS 7.8 or 7.9 running with the DSD plugin activated for DSD.

Looks to me that your Touch is telling Roon it can only receive PCM up to 176 and 192 (which is true), so Roon is converting the output to the best that your Touch can deal with - 176 in this case, as the integer multiple for conversion down to PCM 176 from DSD 128.

What happens if you playback DSD 64 and not DSD 128? DSD 64 should work if LMS is setup correctly.

If LMS is running at the same time as Roon they clash and Roon won’t stream.

The DAC is capable of playing DSD 128 and I usually play from Squeezelite/LMS (on my Linux/PC machine) straight to the DAC with no problems. This problem only occurs when streaming from my Mac mini server with Roon.

I haven’t tried DSD 64 but will tonight.

[quote=“Andrew_Thompson, post:17, topic:11020”]
If LMS is running at the same time as Roon they clash and Roon won’t stream
[/quote]That’s correct, LMS must be shutdown in order for Roon to take control of the Squeeze endpoints.