Can't Save Tidal Albums to My Library

About 7-10 days ago, I started having problems adding Tidal albums to my library. I would click Add to Library as normal, the progress wheel would spin a bit, then I’d get message at bottom of screen indicating that that its taking a long time, and Roon would continue trying in background (see screenshot). Unfortunately, the albums are never added.

Previously, and with identical setup, this was never a problem.

I have found that if I temporarily disable Tidal, then re-enable it, I can add an album or two, but then it will stop working again on the second or third album.

I’ve tried rebooting, even restoring a previous “known good” version of my Roon library from backups, but the problem remains. I had Nuno from Innuos look at it, he combed through my logs, but could find nothing.

Note: I do not have file system access to Roon directories on the Zen. Requires user credentials that Innuos does not provide.

Has Tidal recently changed their behavior? 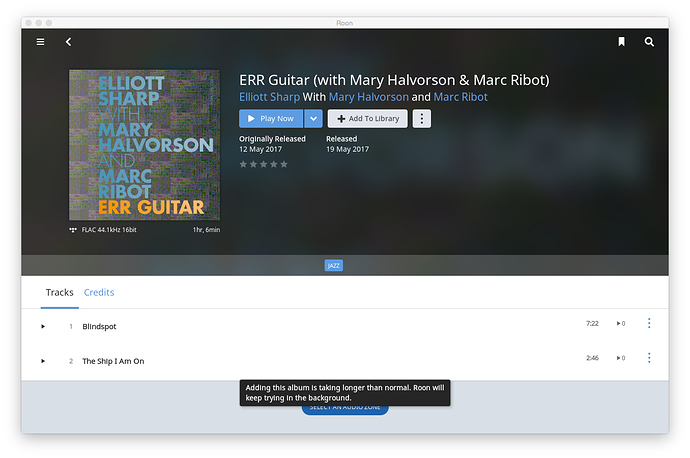 Can you describe your current networking setup? What router is in use? Are there any other devices involved (switches)?

If you add an album directly in TIDAL and then sync with Roon does the album show up?

Netgear R6400 wifi router connected to ATT fiber modem/gateway. Between the netgear and the Innuos is a Cisco WS-C2960-8TC-S switch. Been using this setup for many months without issue.

Adding to my collection in Tidal then syncing with roon doesn’t seem to work either.

Again keep in mind that i can add one or two tidal albums after re-enabling Tidal. Then it stops working.

Do you have another device that you can temporarily use as a Roon Core? When using another Core does the same behavior occur?

Do you have any suggestions?

I have made another Tidal account and started from scratch, and I will try to keep my Tidal album favorites to a minimal from now on.

Nope. Only 3000+ in my library. Besides that wouldn’t explain why i can disable then re-enable Tidal and have it work for 1-2 albums. Also wouldn’t explain why i can continue to add albums to my collection from Tidal app. This is a problem with Roon syncing with Tidal. Ive even attached the Zen directly to the netgear router (no intervening switch), still have same behavior.

In the past, we’ve seen issues with TIDAL resolved by using Google DNS — If you use Google DNS is there any change?

I don’t have access to the device-specific network config options on the Zen. Requires credentials that Innuos doesn’t provide. Do you have any other suggestions?

@Clifford_Baron — I’ve sent you a PM.