Case or WiFi for NUC8i5BEK2?

Hey! I tried Google, but results were somehow not leading to a point, maybe some users can help with advice? I am looking for a fitting, fanless case for the model mentioned above! Anyone purchased a nice case to consider?

Additional to that: Is there a know, working WiFi dongle? Tried already two devices which just didn’t work at all. Thanks in advance. Other than that: installation worked nicely and everything is running so far.

I have the NUC8i5BEK, and internal Wi-Fi works great with Windows 10 Pro. I don’t imagine ROCK will ever support Wi-Fi. You’re supposed to run ROCK headless with the only connections being the power adapter and a short Ethernet cable to your Router.

I have read comments, where some guys were lucky and made usb-dongles work with their NUCs? I guess it is a very base support for wifi on Linux or stuff. I ordered a dongle which Allo uses with the USB-Bridge. I assume it runs on (kind of) Linux as well and could work that way on a ROCK? I will report soon!

Having your Roon core on WiFi only is not recommended. If the core is pulling non-local content from a streaming service or NAS at the same time as it is serving content to endpoints over WiFi, there can be network contention that causes the playing track to skip or glitch. NUC8i5BEK2 is just a EU plug variant of the NUC8i5BEK. The Akasa Turing case seems appropriate. I have an older i5 NUC in the Akasa Newton case, with a SATA SSD for music storage, it has worked well for several years.

These dongles will probably “work”, but dont expect your ROCK to do you any favours over WLAN…
Besides, the Dongles have ■■■■■■ antennae and might work for an endpoint, but remember that the ROCK server need to perform recieve and transmit in two directions simultaneously.
ROCK does support built in WLAN on NUC6 and (i think) NUC7, bpth of which have muche better antennas and performance.

Regarding the chassi i like HDPlex version of a fanless case. I used theirfanless kit (no box) to mount my NUC8i3 into a Streacom FC5 Alpha. Looks excellent and is completely silent, even with the secondary library USB drive (4Tb on top of the 4TB SSD). 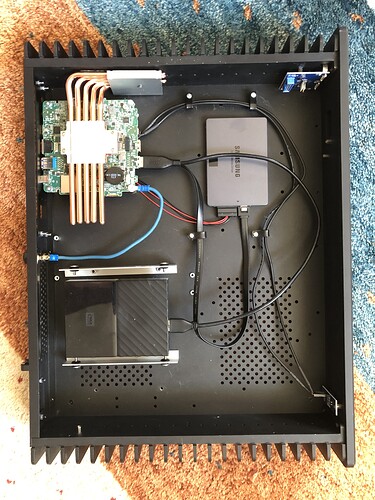 I have a number of the NUC’s here and wifi works fine on them under linux.
ROCK is a striped down linux and may not offer wifi.
Arch, and Ubuntu with roonBridge running has wifi and many other useful items.

Thank you! I know, that it is not recommended … but I have to wait some weeks until I can (want to) afford a USB-Bridge. Right now, a Mesh-Repeater is connected to the NUCs ethernet socket, it is placed roughly 1,5 meters away from the router. NAS with files is upstairs… no issues so far.

I will buy an additional SSD and move songs from the NAS to the NUC… and I will plug the NUC directly into the router asap. But since then, I have to try with WiFi :).

Ah. i would need to have a proper “easy to use” kit… it’s just the case and you mounted the NUCs part to it? LIke this one: Streacom ST-FC5B Alpha Optical Fanless HTPC Alu-Gehäus…

I don’t know what you mean with “HDPlex version of a fanless case”, sorry noob here

Ok, thanks - so maybe Linux is not the problem! i guess I will have to wait until some member just links me a working dongle … or dam’n I will just have to buy that Allo USB-Bridge right now ;).

install a linux, ubuntu is super easy to do.
then install roonbridge. again it is well documented. PM me I’ll even help.
the allo-bridge here is a sweet deal, I just bought a bunch of nucs for dirt cheap so . . .

Yes, there were some manul labour and fitting, but this kit and a Streacom FC-5 Alpha chassi works fine for me. Of course you could chose the HDPlex H1 case also, for a simpler build.
There are also the Akasa series of fanless NUC cases, as someone likey already mentioned.

Thanks a lot, all mentioned cases are great! Unfortunately, not in stock right now in Germany, but I will keep track of them. I guess – considering the price – first step should be the the Allo Bridge before I pimp my core.

Again, Thanks for all the help. I finally got an Akasa A-NUC45-M1B and installed my 8th gen NUC… works like a charm! I am using the core also as an endpoint via USB with ALSA… No upscaling here, mostly no multiroom … just DSP Volume and TIDAL oder NAS-streaming.

Could not find a wokring USB-dongle and gave up after three or four of them, managed to use a cable, the system is much faster now like expected!