CC Built-In Device / MQA Core not triggering prior to transport

Hi ! Breaking this out from an earlier note.

I love roon and its integration with Chromecast. I have many Chromecast Audio devices, which all work well. When sent an MQA signal, roon first authenticates then runs the MQA Core unfolding stage (to 96/24) before sending to the device(s).

All well and good. I also have a couple of Chromecast Built-In devices - a Sony SRS-X88 ( https://www.bhphotovideo.com/c/product/1118970-REG/sony_srs_x88_premium_wireless_bluetooth_speaker.html ) and a Grace Digital ( https://gracedigital.com/shop/encoreplus )

Both play basic non-MQA streams identically. Playing back MQA with Sony as endpoint is just like a regular CCA.

However, when playing back MQA, with an endpoint set to the Grace Digital, MQA Core fails to fire at all according to the pipeline. MQA Authentication does trigger, but then no MQA decode ! (so the endpoint just gets, I guess, the 24 bit signal with the 8 non-musical bits).

I wonder if roon is querying the Chromecast built-in implementation on the Radio and seeing different capability bits ? FWIW it is apparently running Cast Firmware version 1.21.75965 - the Sony is running 1.21.76349

I’m awaiting deliver of a NAD C-338 with it’s own Chromecast builtin, and a bit nervous that it may show same issues - I am hoping not but would love some info from roon devs for how they are deciding to run the MQA Core on MQA material with CC endpoints.

I wonder if its reporting back to Roon as a Chromecast video device which Roon will lock to 48khz and hence no unfold.

Interesting - in the pipeline it reports that it is authenticating as MQA Studio 96kHz for an example track (and 192kHZ for another I tries), then next in the output chain is the Grace Digital Encore Plus (Google Cast). No resampling mentioned, but not sure if that is relevant. I wonder if I can find out more info about how Roon sees the device ? Any suggestions ? Thanks so much for your response @CrystalGipsy – it’s an interesting idea though - the radio does have an LCD display so perhaps is relevant in how it identifies ?

I think it is actually spec’d as a regular chromecast audio regardless, as when I group it with another audio the MQA Core fires and all sounds fund - but I have a support question in to Grace. Will see what they say. And I’ll report back what happens when I plug in the NAD C-338 and how Roon sees that Chromecast builtin device.

Last data point FWIW - none of the chromecast audio setup pages - whether built-in or independent dongles, show the “Use MQA Core Decoder” toggle on their settings page in roon. All the other CC’s I have, however, do have the MQA Core decoder fire in roon prior to transport.

Might be helpful for support if you can post a screenshot of your signal path. You can do this from your phone or tablet. 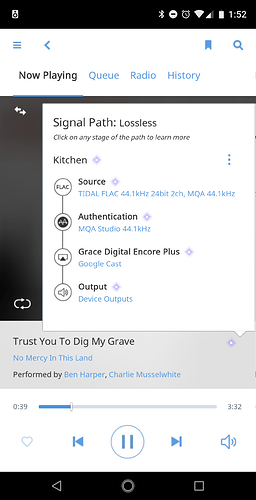 So does the same track or album authenticate at 88.2 on other devices ?

On the other devices (e.g. the native Chromecast Audios), the MQA Authentication entry is always as above, but it adds MQA Core Decoder right afterwards - into 88.24/24

Hi John, thanks so much for the note. I wonder if it might be possible to double check the above device for high res support, as I believe it should be a Chromecast high res audio device ? ( As is the case with the Sony srs-x88 I have which also has Chromecast audio built in. The Sony does register as a high res device, and thus mqa core does trigger. As is also the case btw if I group it with the radio above, which I think perhaps may demonstrate support?). I wonder if the query of the radio above misidentifies it as being a video device perhaps in order to perhaps request display information? Is that possible? Is there any way I can inspect logs to see what may be happening?

I also sent a mail to Grace Digital to see if they can offer more information. Thanks again!

The NAD C338 works just fine with Roon which recognizes it as a high res audio device and thus is happy to do the MQA Core decode prior to sending audio (for MQA content).

I am not sure if I am doing anything wrong, or if it is my NAD D3045 that’s to blame, but for the life of me I cannot get it to signal that it is handling an MQA file when Roon sends it to it via Chromecast. I have tried enabling the various combinations of decoding and rendering, and diabling it, but the “MQA” light does not come on on the amp – does anyone else have this NAD unit and can advise as to best practice? Chromecase is the only way I have to use Roon with it, btw, short of connecting to the computer via USB

It looks like, according to it’s spec page, that MQA is only supported on the USB connection for that device.

Ahh ok thanks! Not sure how i missed that…

MQA on USB only is not that uncommon. I think that for many manufacturer’s using a standard USB chipset, that the MQA code is in the USB firmware.

Just rechecked the NAD D3045 Manual. What I see is:

So I guess my question as to why I cannot see MQA lighting up still holds?!

Well, interesting. I wonder why they would specifically specify one and not the others on their tech page.

Anyway, I would first test by verifying that Roon is setup to have the NAD under MQA Capabilities as both Renderer and Decoder, under Device Settings.

And then verify Roon is sending a bit perfect stream. Meaning, Turn off all DSP upsampling, Under Zone settings set volume leveling to off and Crossover to 0, Set Volume Control to fixed in Device settings.

Also, verify that the Chromecast audio, in its own app, is set to fixed volume, or 100%, to ensure it is not meddling with the stream.