When I remove DSP, trying to get to very most simplistic signal path, and liste to Coltrane’s Tunji (from John Coltrane Quartet’s album titled Coltrane), I here the cymbals on the left channel incorrectly. When I use the DSP I have set up, then I get the channel correct…the cymbals on the right channel. I’ve talked to somebody on the PS Audio forum who is also using the Matrix with the same DAC and he doesn’t ever get the cymbals on the left. I’d like to understand where I am making a mistake. I’ve looked for similar situation in the roon knowledge base, and didn’t find anything close enough. I’m a roon lifer, so not wasting anyone’s time here 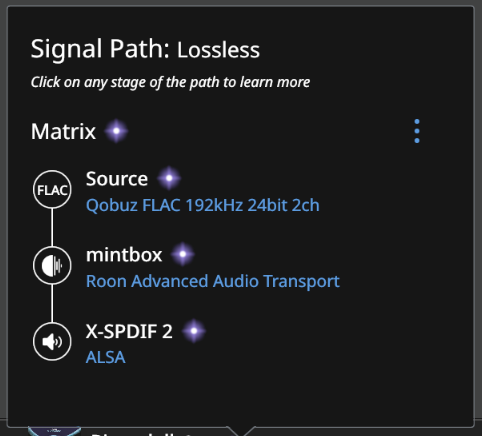 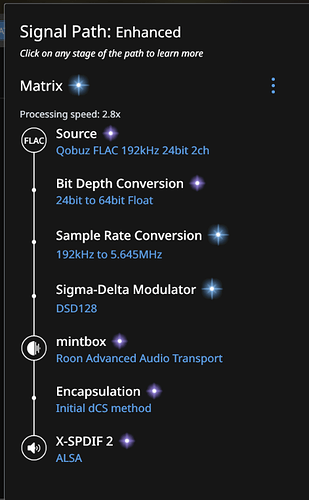 Your DSD setting is “initial dCS method”. That’s almost NEVER the correct option. The Matrix uses an XMOS USB chip (or at least their current stuff does). As such, for DSD, you should be using DoP (or native DSD if not on a Mac).

So maybe this is why your channels are reversed?

You’re right, and I previously attached an outdated screenshot. The problem still appears to be valid 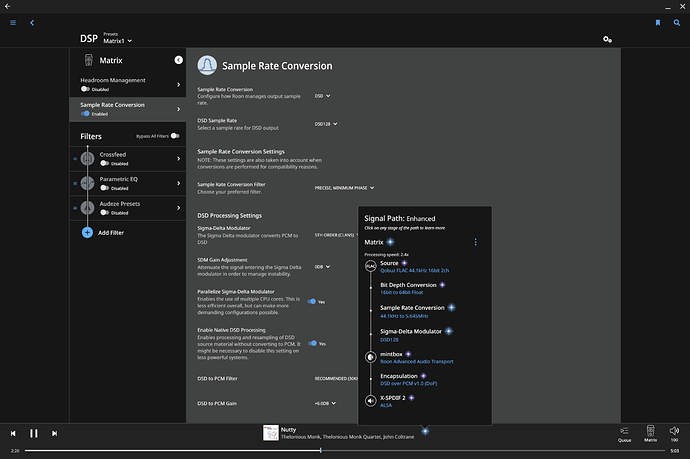 And undstand that the problem occurs with the lossless signal path above. Thank you!

Do you have anything else on the linuxmint system that can play audio? If so, does that also have the channels reversed? Or only Roon?

Also, you indicate HDMI between the Matrix and the PS Audio. That’s the I2S connection, correct? There are at least four different I2S pin usages, and several of them swap left and right channels. Have you checked that the Matrix is set to the correct I2S setting for the PS Audio?

(When using DSD, the DoP encapsulation probably ends up masking the I2S channel reversal, since the channels are hidden inside the transport packets. Which would explain why when you upsample to DSD it has the correct channel assignments.)

I think you nailed it. Looks like I had a IIS reversal setting on the bottom of the Matrix complonent. Thank you! Like I said, I knew I had something wrong. Thanks again!

How do you have the dip switches on the bottom of the matrix set? I have mine all set to “Off”. I have no issues with the channels being reversed no matter what I play: Native DSD, DoP, or PCM.

I now have only native dsd…I’ll see how that compares to all off, etc.