I had such good results with my previous RoPieeeXL experience, that I’m considering one for the garage. I have an old Bose Wave System that I use to play local radio. It has an 1/8" AUX input, so I thought I’d give it a try. I used Apple’s Lightning-to-headphone converter and successfully played Roon through the Bose. It sounded great for a garage system.

I don’t want to use the phone as the player, so another RoPieee box with WiFi enabled sounds like just the ticket. But I’m cheap, and want to save a buck wherever I can. So, instead of a $35 HiBerry DAC+ headphone jack version, can I use one of the ubiquitous no-name inline phone DACs that have a USB input? Something like this?

I know it won’t sound great, but likely as good as my phone’s output, and fine for the garage. Will the RoPieeeXL recognize it? Or do I need to go with a HAT DAC?

Thanks for any input,
Steve

Nevermind. I went ahead today and ordered the RPi4 with HiFiBerry DAC+ 3.5mm Headphone Jack Version. I’ll just run the output into the AUX input on the Bose Wave Radio.

The headphone jack sits under the HAT board, so I’m going to cut an opening in the red/white plastic Raspberry Pi case and make it fit. Hopefully. 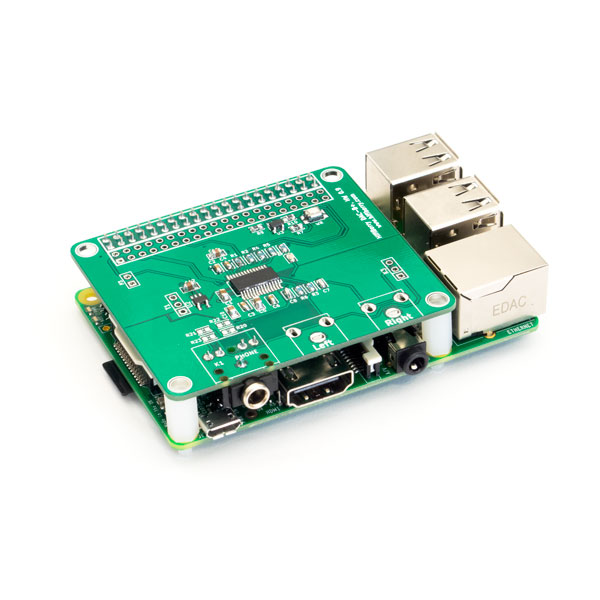 I got the Raspberry Pi, HiFiBerry DAC+ 3.5 Jack, and plastic case today. With the jack mounted under the PC board, it fits in the red/white Raspberry Pi branded case. I needed to open a slot for the jack, and notch the end of the PCB a bit to clear the cover clips. But everything went together fine.

Installed RoPieee XL like on my first unit, so the steps were easy this time. Thanks again to @Nathan_Wilkes for the handy guide. This time I enabled WiFi and the HAT without any problems at all. The first unit’s board was RPi B rev 1.1 (4GB), and this one is an RPi B rev 1.2 (2GB). Only a couple of weeks apart, but assume mixed inventory. I don’t know what the differences are.

Two questions you guys might help with:
Both units have the steady red light and a green light blinking once per second. I assume that’s normal? I haven’t seen any reference to the lights during normal operating conditions.

Second, the unit I built last week doesn’t have a DAC on board, and is in the Flirc case, and is currently running 39°C. This one has the DAC on top and is in the plastic box, and is running 61°C. I assume the DAC and lack of heat sink on the plastic case is what’s causing the difference? At what point is the temperature a concern?

Shouldn’t be a problem. From the RPI FAQ:

What is its operating temperature? Does it need a heatsink?
The Raspberry Pi is built from commercial chips which are qualified to different temperature ranges; the LAN9514 (LAN9512 on older models with 2 USB ports) is specified by the manufacturers as being qualified from 0°C to 70°C, while the SoC is qualified from -40°C to 85°C. You may well find that the board will work outside those temperatures, but we’re not qualifying the board itself to these extremes.
You should not need to use a heatsink, as the chip used in the Raspberry Pi is equivalent to one used in a mobile phone, and should not become hot enough to require any special cooling. However, depending on the case you are using and the overclocking settings, you might find a heatsink to be advantageous. We do recommend the use of a heatsink if you are overclocking the Raspberry Pi 3 Model B. Of course, if you just like the look of one, you will not hurt the Raspberry Pi by placing an appropriately-sized heatsink on it.

Thank you @jaguone for the reference. I wrote just before bed last night, and planned to go searching this morning. I appreciate it!

Temperature on the new one is 66C this morning after snapping on the cap last night. I expected it would go up some. These are both in a 21C house. The garage can vary a lot, getting as warm as 35C in summer. That doesn’t sound like it should be a problem.