The album description seems to begin referencing this album, which is a duo with Baker and vibraphonist Wolfgang Lackerschmid. However, it soon adds players such as Tony Williams on drums, Larry Coryell on guitar, and Buster Williams on bass. Those three are not to be found anywhere on this recording. 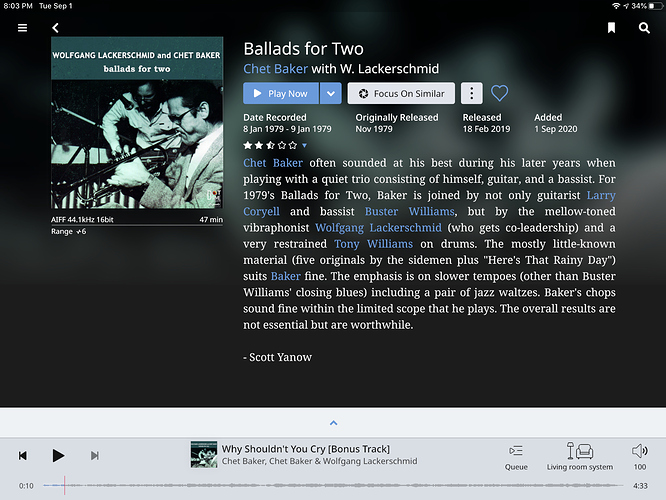 Look up the album on AllMusic.com to see where these credits come from: https://www.allmusic.com/album/ballads-for-two-mw0000649386/credits.

If you think that these credits are wrong, you should provide a reliable source for that information or nobody might be willing to change that.

One of Roon’s metadata providers is the same provider that is used by AllMusic (but note that AllMusic metadata is often limited to US releases). If you notice that an issue in Roon is also on AllMusic, you can submit a correction directly on the album’s AllMusic page. 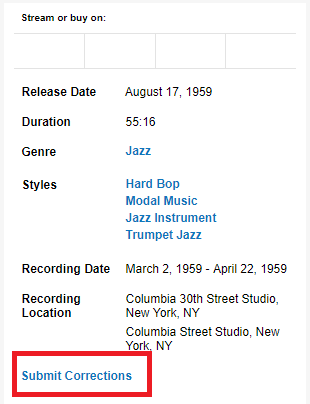 Please note that this doesn’t instantly reflect in Roon. If your correction is accepted it will take about a week or two before you’d see this change in Roon. If you’re still seeing an issue after something has been corrected on AllMusic feel free to reach out to us!

Thank you. I submitted the corrections to AllMusic. This recording seems to be mismatched to a different release.