just got this DAC (and loving it

glitch is… when Roon ends playing (an album, a playlist…) the light inside the DAC stays lit on the colour that corresponds to last played track’s sample rate

thought this was normal behaviour (only got the 2Qute yesterday) but found it doesn’t happen using eg cough-cough Audirvana cough-cough: when playing ends the coloured light turns completely off (only the tiny “input” led is always lit)

oh… light remains lit even after shutting down the computer. as if Roon is not “telling the DAC” something it should (or that other apps do) when playing ends

thanks for taking a look into this

… I’m now sure that Chord DACs turning “sample rate light(s)” completely OFF once playback ends is the correct behaviour: this happens on my Chord Mojo too, connected to an iPhone so… different OS and software player (Korg’s iAudioGate)

@paolo, can you try and stop playback witin Roon and see if the coloured sample lights go out after a couple of minutes of “no playback”?
On my DAC the previous sample rate is displayed when playback is stopped/paused, which means Roon maintains an output signal, even though its muted.
However, after, say, about a minute or two after playback stops, Roon abandons this signal and the DAC responds with reporting “no lock on signal”
Atb Mike

hhhmmm… 5 minutes I stopped playback and sample rate light is still ON :-/
though… isn’t this normal behaviour, since there’s still stuff in the play queue?
(I believe the very same happens in A+ too unless I click the “empty queue” button)

EDIT:
confirmed: happens in Audirvana too. if I stop (pause) playback the sample rate light remains lit (both in Roon and Audirvana)
though as soon as I emtpty the play queue in Audirvana the light turns OFF
same as when Audirvana ends playing an album or playlist. whilst in Roon it always remains ON

Sorry Paolo, i confused the behaviour on different inputs.
It’s like you say on USB, but on the SPDIF based inputs it is like i described.
If you try the optical out from your mac, youll see what i mean;
Playback pauses, and about a minute after the DAC drops its lock in the (muted) signal.
I think Roon does it like this to not create noise in between songs.

I’m fine with light staying on during playback pauses
though… I’d really like it to turn OFF when playback ENDS, as it happens using other software players

an even major issue is that sample rate light remains on even after shutting down the computer, unless the software player has turned it off first

Edit:
re S/PDIF: I’d love to use S/PDIF instead of USB though… this DAC is indeed capable of DSD-128 DoP over coaxial too, but neither my Mac nor the Aries can output beyond 192KHz over it

… any word on this from @support ?

Hi @pl_svn ---- My apologies for troubles here. I would like to gather some logs from you and will be contacting you via PM with instructions shortly.

In the mean time, may I kindly ask you for the following information:

and here’s a screenshot: 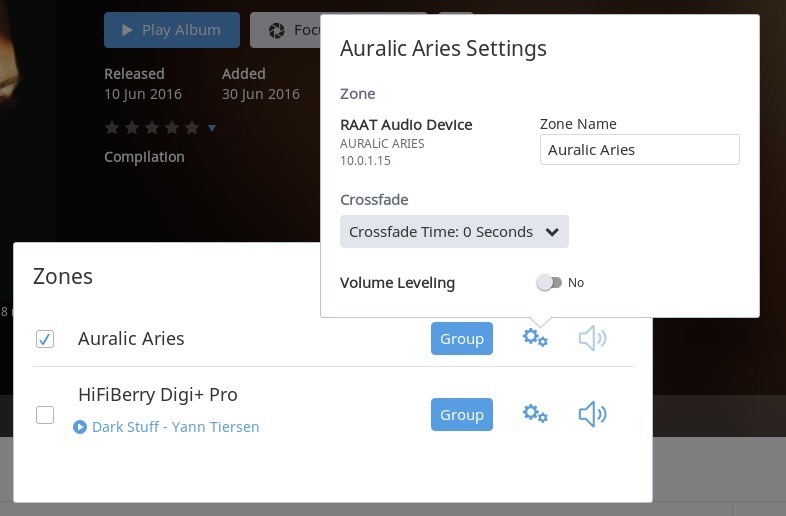 the very same, though, happens with a direct USB connection Mac mini -> DAC

@pl_svn ---- Out of curiosity are you using this device in “exclusive mode”? If not, may I kindly ask you to try, and see if there is any change in results. Thanks!

yes Eric: I enabled exclusive mode right from the start