In Roon I have one album in my Tidal favourites that is showing up as AAC: Christmas At Downton Abbey. When I play the album in Roon it plays the AAC version instead of the FLAC version in Hifi.

The album shows up in the Tidal app as playing in Hifi, so it appears the album is available in higher quality. I have included screen shots of the album in Roon and playing in Tidal to illustrate. 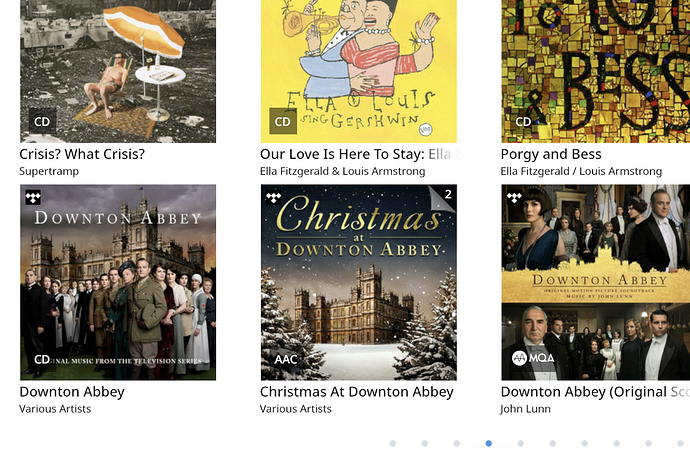 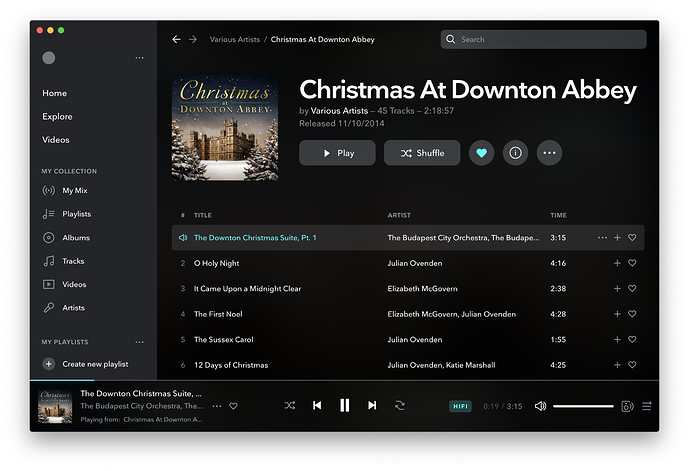 That’s because the source file provided by TIDAL is AAC; Roon reports the format correctly, i.e. not from metadata.

AAC version instead of the FLAC version

Tidal plays what it has. There are a lot of Tidal titles in AAC only; depends on what genre you listen to whether or not you run into them with any frequency.

I understand that Tidal plays what it has, but according to Tidal they have 44.1/16 FLAC files for this album, and that is what I get when I play the album in the Tidal app. That is what the badge in the bottom right of the screenshot that says Hifi means. If it were playing an AAC file the Tidal app would show a badge in the bottom right that says High, and not Hifi.

There is also a noticeable difference in quality between the “High” quality file that Roon plays (AAC 320), and the “Hifi” quality file that plays in the Tidal app. (I have compared the two on a stereo receiver and using Audio-Technica M50x headphones plugged into a computer)

Tidal appears to have Hifi quality tracks for this album, but Roon is not playing them. That is the problem. Perhaps this is something @support can help with.

It looks like there are two versions of this album in Roon. One is 44.1/16 FLAC and the other is AAC. If you select this album and go to Versions do you see the FLAC version listed from TIDAL?

I do not have a Versions tab for that album. It seems as if Roon on my system is only seeing the one version of the album.

I tried removing the album from my library and adding it again, but Roon still only sees the AAC version of the album.

Can you confirm the region for your TIDAL account?

In the UK I only see a single version: AAC.

I am in Canada. I have access to the FLAC file in Tidal, just not in Roon.

AAC for me in the UK, just checked.

I have both the Flac and ACC in both Tidal and Roon. US account.

Please accept my sincere apologies here — When I checked this the first time, the 44.1/16 FLAC version was Qobuz, not TIDAL. I’m seeing the same in Roon and TIDAL that only the AAC version is available.

I discussed this with the team and we checked with a Canadian account that we have and we think we see what is going on here. With a Canadian account, in the TIDAL desktop application, we see that it does show HiFi. However, when we went to the TIDAL web player with this same account, the quality is only showing as High (aka AAC).

When we look at the data that TIDAL is providing us, we only have AAC for any region where this album is available. The only place where any other format can be seen is with a Canadian account in the TIDAL desktop app. It’s hard to say if the desktop app does have access to a higher quality version of the album than everywhere else or if it’s just a display issue, but ultimately we do not have access to any other version than the AAC version that is being provided to us (and can be seen in a vast majority of regions and players).

You have our apologies for the inconvenience and confusion here! If you have any questions about this please do let us know.

No problem, and thank you for following up. As far as I can tell the sound quality in the Tidal app is much better for this album. Although I could be mistaken, it appears that Tidal is in fact playing the file in Hifi within the app on both my computer and my phone for my region.

If people in other regions cannot see the album in Hifi, and Roon does not have access to it, I expect it is either a bug or a licensing issue. Either way, it seems there is nothing that Roon can do; it is a problem that Tidal would have to fix.

) . Thank you for your help in sorting out the source of the problem.