So, we all know this lovely little piece by Debussy (there are other Clair de Lunes running about, FYI). As I followed my nose around my library and TIDAL’s I found the following:

Look closely and you will see that I have inadvertently linked to TWO identically-styled metadata branches offered by Tivo/ROVI. Note the text differs. [Rhetorical question: WTF?]

Further investigation reveals that TIDAL has 130 performances in the top Claire, 87 in the bottom. Casual audit reveals no overlap. So, for reasons unknown, Claire’s performances have been bifurcated!

So why two branches? At first I thought the top one was for piano renditions, bottom for orchestration. But that was just an artifact of the first ones I chose. Both branches have smatterings of a wide variety of offerings, including: the original piano; orchestral; choral (!); 4 hands; guitar; harp; harp and vibraphone; flute; violin; and a jazz quartet (Jacques Louisier; good stuff).

But here’s my question at last. Suppose I wanted to curate a collection of these renditions, all under the “official” Clair de Lune metadata umbrella, but each having its own designation that would be displayed somehow on Roon’s Performances page, e.g., “harp”, “piano”, “orchestra”, “banjo”. How could that happen within Roon? Anyone have a clever tagging scheme?

Or maybe the answer is on the composition page, filtered on Clair, with editable instrumentation entries? Food for thought. Or stale food for the trash. You decide.

I find there are many compositions that I know I have say 20 (I have many Beethoven Sonatas sets for example) of but they show up in several sometimes more than 2 branches. Its rare any individual sonata is caught on one name. Back to iffy metadata I suppose.

You can merge them but its a pain especially when you don’t know its there.

There are several things going on here, with ifs and buts. Finding the entries on Allmusic tells us a lot. Roon is not showing the full title as in Allmusic, where it is indicated that one entry (going by the text) is for arrangements, the other for solo piano original. So much is clear.

That you observe that there are a mixture of solo piano and original in both entries could be for several reasons, including (a) Tivo having attached a performance to the wrong work entry (i.e. Tivo could have attached a piano solo recording to the arrangements entry, or vice versa) (b) Roon metadata server maybe having trouble with Tidal equivalences in this case © your tags not being clear enough, in the case of unidentified albums. It’s impossible to tell which is happening in each case without looking in detail at the entries and your metadata.

Your specific question about having more detail and granularity about arrangements for instruments has a negative answer I’m afraid: no way to mess with that kind of thing currently I’m afraid.

Arrangements are anyway a hornets nest. For example arrangements can be found in Tivo in many places: either as an independent work by the arranger, as a separate work but by the original composer (as in this case) or as the original work without specification (just plain wrong). I don’t know if Musicbrainz or other metadata providers handle this better.

I think Roon are aware, though it’s good to remind them here.

(@Mike_O_Neill’s point is basically unrelated and can most likely be put down to simple poor metadata. The way forward here is just to merge compositions, or improve tags if you can be bothered.)

The way forward here is just to merge compositions, or improve tags if you can be bothered.)

Well, in this case I was bothering in extremis to tag properly, but I had some more learning to do.

Related funny (not) story: I added a new performance of Bach’s Suites for Cello. But, the d**n performances weren’t linking and I was going crazy. I looked at the first movement’s Title and it read “Suite for Cello Solo No. 5 in C minor, BWV 1011: I. Prelude”, which was how the cover read. Well that looks fine. But no joy.

Roon was looking for “Suite for Solo Cello No. 5 in C minor, BWV 1011: I. Prelude.” Had I gone straight to AllMusic, I would have saved some steps.

My human brain says all of these are equivalent but I wouldn’t know how to program that logic to accept all three.

Roon, in a noble, smart effort to avoid Type II errors, makes many Type I errors. I go back and forth as to which error I’d rather have.

they do. they issue here is there is no concept of a canonical work in Tivo’s data. this is not the case elsewhere.

Curious to see some concrete examples, to know the possibilities…

My point is that there is not a definitive format to the naming convention of a work, if there were then these funnies would not occur

I have all 4 tags set up in my Tagging Software ,

I originally set up Composition in my db for maybe 2000 cds , it was a labour of love you can imagine

Much as we support Roon’s effort, defending the second wrong doesn’t make it right !

Another annoying one, consistently mucked up by rovi, is inconsistent “ballet” and “suite” metadata. No rhyme nor reason at all.

So the ballet is “The Swan Lake, ballet, Op. 20” and the suite is “The Swan Lake, suite, Op. 20a”. Of course this can be tidied up by re-tagging but I didn’t think that was the point of roon. I seem to be doing more tagging not less.

This is an example where there is a big difference between the running time of a suite and a full ballet . A simple check by roon would I am sure get it right more often than it gets it wrong and greatly reduce subsequent manual effort.

But here’s my question at last. Suppose I wanted to curate a collection of these renditions, all under the “official” Clair de Lune metadata umbrella, but each having its own designation that would be displayed somehow on Roon’s Performances page, e.g., “harp”, “piano”, “orchestra”, “banjo”. How could that happen within Roon? Anyone have a clever tagging scheme?

I experimented with putting “harp”, “banjo”, “vibraphone” in the version tag but quickly lost the will to live and gave up. Mostly I already have this in my tags in the track title. But when roon makes a composition id, one of two things happens. It replaces my composition titles with rovi’s or it uses my titles. I just cannot see a pattern. It is not anything to do with “prefer file” as far as I can see.

In the case of “identified” compositions, if it’s a multipart work it uses Rovi’s title. If it’s single part it uses your title.

If you look with that in mind is it now consistent?

What I find inconsistent is that in most parts of roon I can “prefer file”. As it happens most of the time I actually “prefer roon”. But in this case of multiple transcriptions, arrangements, orchestrations etc. I usually “prefer file”. What I find inconsistent is that for single part works in classical or various “mixes” in pop I can group the compositions but control the title descriptor. A lot of electronic dance music for example would be virtually unnavigable without that feature. As you point out it also works for single part Classical. For example, I can merge my single part quartet, string and choral Barber Adagios as a single composition but retain the unique title descriptors (even very different ones for the choral Agnes Dei version, for example).

But I cannot do that with a multi-part work. So, for example, I used to play guitar in my youth so I have a lot of Bach transcriptions. I like to merge the compositions and what I am seeing is sometimes I can retain my title descriptors (e.g. “violin sonata transcribed for guitar” or similar) and sometimes I can’t. Now I know why. So all my multi-part Cello Suite transcriptions played on guitar have absolutely no mention of that: 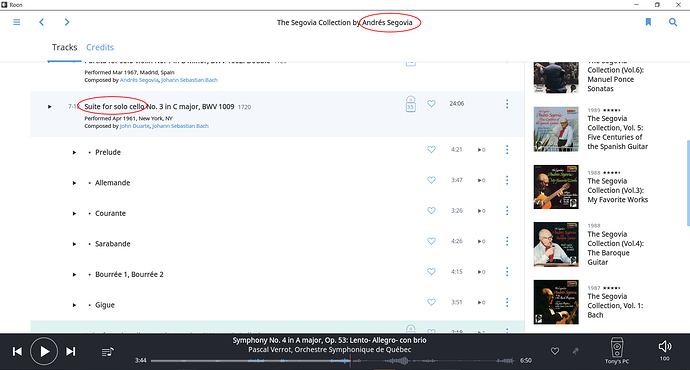 Is there any particular technical reason for this? It just seems very inconsistent to have a “prefer file” rule which is actually “prefer file except for identified multi-part compositions when rovi will be preferred”. It will soon be 2 years for me and roon and unless you had pointed his out I would have been none the wiser. So thanks again for clearing that up. Much Appreciated.

I ended up with a third Claire de lune. A sort of "catch all’ for “orchestra or other arrangement”. The instrumentation is still “solo keyboard” though. 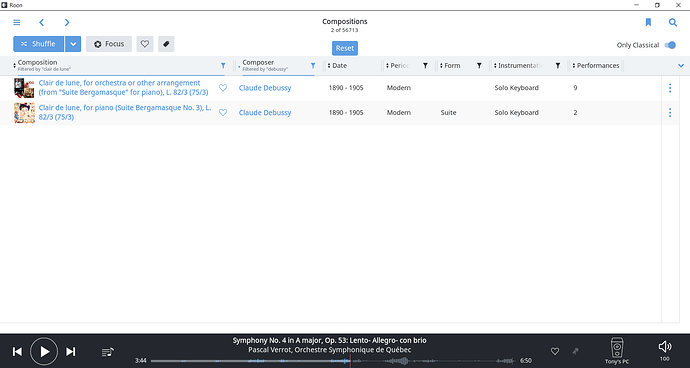 There was no particular pattern to which way my Clair de Lune’s were identified. Of course it took me a while to realise there were different ones. It’s another reason I have stopped batch uploading to roon. There are too many things to double check. The biggest problem I find in this scenario is that there is no easy way to demerge a piano Clair de Lune from the orchestrated one or an orchestrated Clair de Lune from the piano one once roon has made the match. The only way I have found is to edit the titles to exactly match the Claire de Lune I want to merge to. Sometimes, but not always (again I struggle to see a pattern), I must “prefer file” and if that doesn’t work, populate WORK/PART even for a single part work.