I have a very odd case here. An album of classical piano music for four hands by Mendelssohn played by Roberto Prossedo and Alessandra Ammara on the Decca label.
Roon recognised (“Identified”) it and so the metadata from the Roon database are shown:

image1718×725 241 KB
This album contains several compositions with more than one parts.
The Sonata for 2 pianos in D major is correctly represented with its parts under the main title and the same goes for the Fantasia for piano, 4 hands in D minor and Allegro Brillant for piano, 4 hands in A major, as you can see in the following screenshot of the album page: 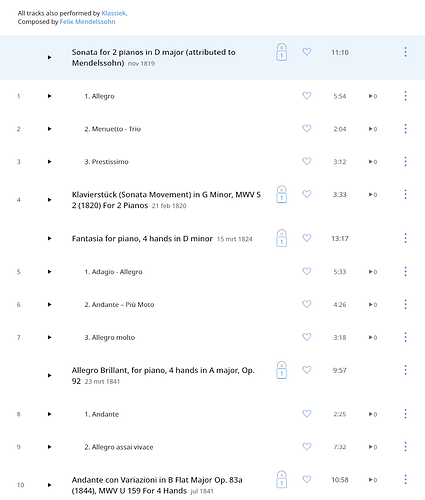 image1103×1295 93.9 KB
But the last work on the album, an arrangement for piano duet of Mendelssohn’s Midsummer Night’s Dream, is shown as five compositions, or perhaps better put, shown as five instances of the same composition with each one containing a different movement of it. Perhaps this is caused by the fact that only a selection of the original parts of this composition have been arranged and played on this album? 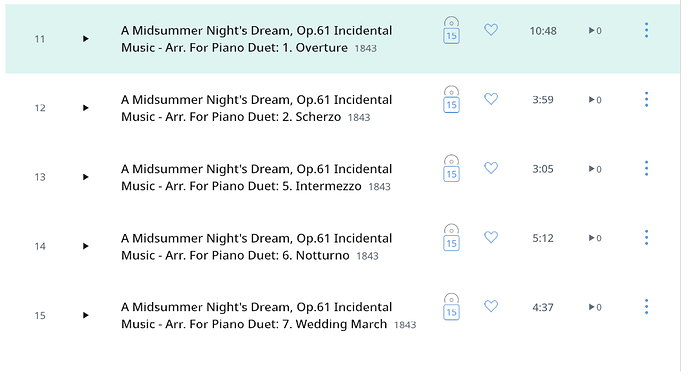 image1134×617 67 KB
Anyway, this seems to me to be unwanted behaviour of the software. Or is the metadata in Roon’s database (TiVo, RoVi) to be blamed?. One of the side effects is that I appear to possess 15 versions of A Midsummer Night’s Dream (see screenshot above), while that number should in fact be 11 (or even less, taking into account the misreprentations in other albums that I will name later)!
The composotion page looks like this (I had to take 3 screenshots): 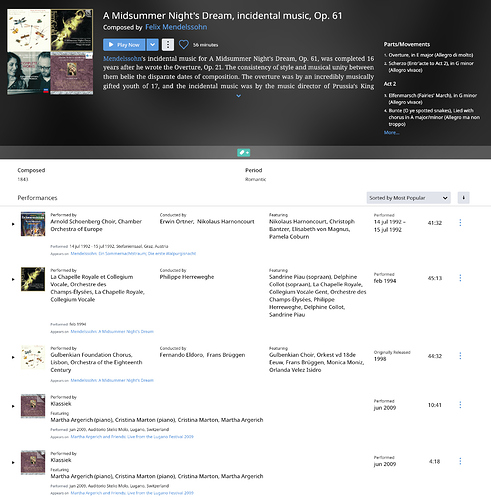 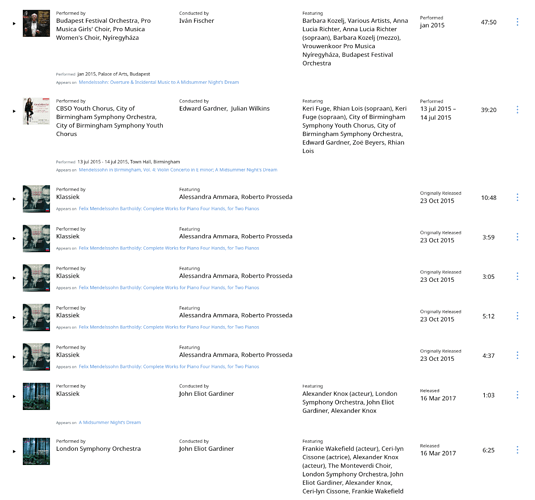 image1742×254 37.5 KB
As you can see, the Roberto Prossedo / Alessandra Ammara performance of this composition is not the only one that is misrepresented in this overview. Gardiner’s version misses a lot of its parts and the performance by Argerich / Marton is also seen as two different performances of the same composition.
And, again, these are all Roon-Identified albums!
I know I can correct these occurrences of failed grouping manually by adding WORK and PART tags to the original files in my collection. But in view of the fact that I have some 12,000 albums, this would mean soooo much work.
Can’t this be fixed by making the Roon software smarter?
Classical Music (Opera) Composition groupings