I see no improvement in handling classical box sets with Roon even when following the box set instructions to the letter. NOTE: this is music I own in my library. I try and combine discs that are in a folder called Debussy The Complete Works so that they will be identified in the box but as separate discs. When I try this, the finder does identify the box set but then I have to manually move the files so they identify correctly as shown in the attached screenshot? This is a huge pain in the ass and doesn’t seem like it should be a difficult task for Roon, especially since the discs are numbered as separate folders under a master folder. WTF! 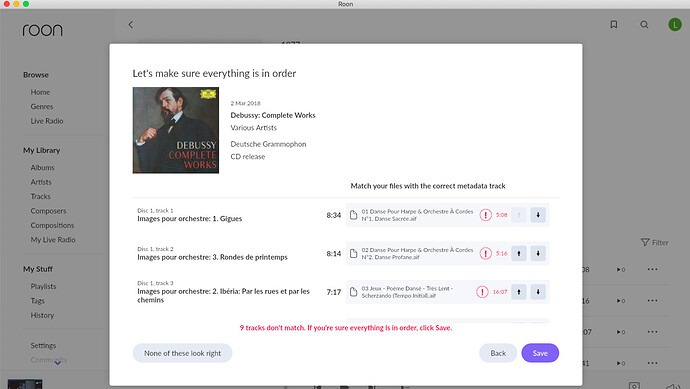 Funnily I added this set not long ago , it IDed first time

Each folder was CD01 … nothing added
Each disc had its CD number set correctly
The whole Set had Album = Debussy: Complete Works

Then dropped into the watched folder

I think the addition of Focus and Filter have added a lot for finding your way around boxes , have you tried them

I agree boxes need a lot more TLC but I doubt we’ll see it in my lifetime, that’s why I keep big boxes in JRiver where I can manage navigation

I always had the most success keeping all the tracks in one folder and making sure the track title started with the disc number then the track number.

Also make sure track number and disc number tags are in the metadata.

If your tags are fairly well done you could drop the album in the musicbrainz app.

(Use a copy, not the originals)