One of the problems with Roon for classical music that there are quite a few albums that Roon does not identify that are readily available for purchase from sources like Qobuz.

For example, I was looking today at titles that Roon cannot idientify, and I found all three readily available for purchase on Qobuz. All these titles are conducted by Semyon Bychkov:

There are many more examples like this. The information to tag the CD exists on Qobuz (though the format is a digital download, it has the same tracks as the CD).

I wish Roon would expand its metadata to include information such as this.

I just checked and these same CDs are also available on Tidal. Wouldn’t it be possible to access this information to identify these CDs?

I suspect these are also available via TIDAL, but the metadata is poor, so that searching for them takes a little more effort. For example, a couple of the Semyon Bychkov albums are tucked away as “Semyon Bychkov & Orchestre de Paris” (rather than being separated as two distinct artists). 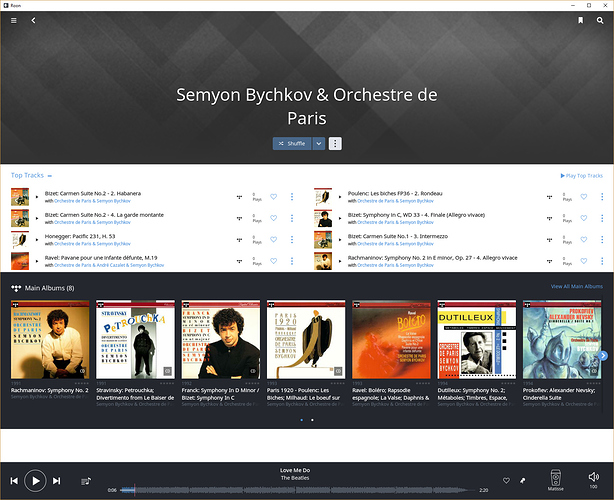 And the metadata in the albums themselves probably leave a lot to be desired (for example the Stravinsky album): 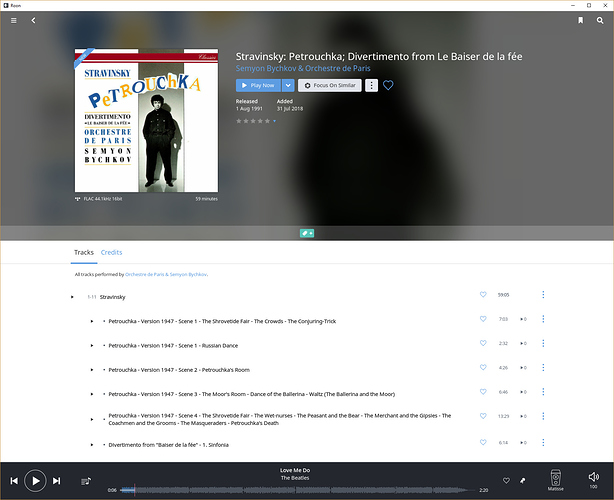 It’s the old story of garbage in, garbage out, I’m afraid. Metadata quality is not easy to achieve, apparently.

Did you try manually identifying them? Often I find that Roon needs a helping hand when the metadata is knows about is cr*p.

If the only metadata we have for an album is from TIDAL, we cannot use it for non-TIDAL content.

Its a shame since many old CDs that have been re-released are available on either Qobuz or Tidal and would allow me to identify many of my old CDs. Are there any plans to address this?

As a test, I downloaded the Bychkov/Stravinsky album from Qobuz. Sure enough, Roon doesn’t know about it, despite trying various manual search combinations. The Qobuz metadata is somewhat better than in TIDAL - it has recognised the compositions, but it’s claiming that all tracks are performed by the composer Igor Stravinsky, whilst Igor Stravinski is the composer… 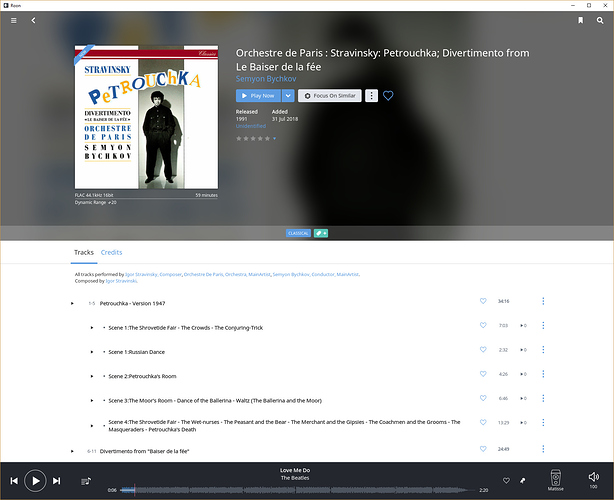 The frustration is that the data is out there, but that Roon is unable to make use of it. This is particularly a problem with classical music.

The frustration is that the data is out there, but that Roon is unable to make use of it. This is particularly a problem with classical music.

The metadata is not “out there.” Commercial metadata curators (AllMusic.com, Qobuz, …) restrict which other commercial entities can make use of the metadata they’ve painstakingly collected and edited. Roon has deals with some metadata sources, not with Qobuz (yet?) AFAIK. (I have a bit of practical knowledge about the challenges of music metadata in the commercial world.) For individual users, the best (if laborious) path is to follow the Roon KB advice on track tags and their interaction with Roon’s metadata, and play around with metadata editing options.

The simple truth is that if you are not happy with the quality of metadata, you have no one to blame but yourself. Most album metadata online is at least partially crowd sourced. Using that metadata is relying on the donated time and effort of others. Alternatively, you can take responsibility for supplying and curating your own metadata. Better yet, you can contribute to the cause by submitting your metadata that you deem of superior quality.

When all else fails , use a Tag Editor to correct the tags and then in the Album “Prefer File” rather than Prefer Roon

Works most of the time

I can detail my process if you’re interested , it can be complex but works…

Are there any plans to address this?

Bruce, as you know there is a lot going on, but we are always looking to improve metadata coverage.

I find it works 100% of the time. And it leads to consistency of presentation. I HATE proprietary metadata for that reason and so never use it.

I tend to agree but to do it manually is a load of work, I have in excess of 3000 Classical Cd’s

So I intervene only when I have to

You totally miss the point of my comments. Of course you can always use your own metadata, and I don’t need a lecture on how this is my fault. I was raising the issue of why Roon can’t use metadata that is already out there. It seems weird that you can add one of the albums I referenced above via Tidal, and it has pre-populated data, while Roon is unable to identify this same album from my own collection.

I guess I have to repeat, it’s not “out there”! Commercial metadata providers and streaming services who manage their own metadata (such as Apple, Spotify, Tidal, Google, …) put strong restrictions on metadata usage. The complexity and expense of cleaning up music metadata don’t come for free. Crowdsourcing through Discogs or Musicbrainz is all well and good, but the practical reality is that those sources do not have the resources to do the job, especially for the long tail of old or obscure recordings. Even new releases from some independent labels often come without good (or any metadata). For instance, this had no metadata for quite a while after it was released. Heck, I actually contacted eClassical (who distributes BIS digitally) about the fact that the digital tracks I bought did not have proper tags, they sort of shrugged.

I find that Roon metadata works wonderfully (with classical CDs) some of the time but is incomplete and as in the early days of Meridian leaves one’s collection looking a bit of a mess. After complaining to Meridian things improved greatly. Is it because we are in the early days of Roon? I will give two examples (amongst many) which I find difficult to understand; Roon identifies three volumes of the six-volume set Tchaikovsky Symphonies conducted by Rostropovitch but not the other three and Haitink’s Bruckner 4 on LSO Live as Brahms 4.

Just did a metadata search for the Tchaikovsky/Rostropovich boxset. Allmusic.com (which I have a paid account for allowing me to do a lot more there) has the 6 disc set title, but no disc or track info. Musicbrainz has a different version, originally from EMI, with 5 discs. Discogs does not seem to have it at all. Roon may use additional metadata sources, but the fact that this boxset is not fully catalogued anywhere does not bode well for Roon having good metadata for it. In general, the problem with classical compilation boxsets is that labels keep doing them as a way to cheaply re-market old recordings and do little to provide solid information on their contents that includes accurate metadata uploaded to metadata providers.