RE: Classical composer views, I have found many bugs, I’ll list three here to start.

In Roon under the Composer view, it says I only have 552 tracks. Thus, there is something wrong with this view. To examine the complete collection, it is necessary to go Album>Focus>Composer>Select, which provides the correct number of tracks.

This is unwieldy. +1 on prior requests to have an an explodable album list under composer.

Scriabin has two entries in your database, one of which is written in Russian Cyrillic letters. During a ripping project, I noticed that the tracks from the same box set would be randomly assigned to either of these entries, creating a real mess. Please delete the Russian entry. Thanks.

This composer does not appear in the basic view by composer, although the composer is present when searched. Strange. 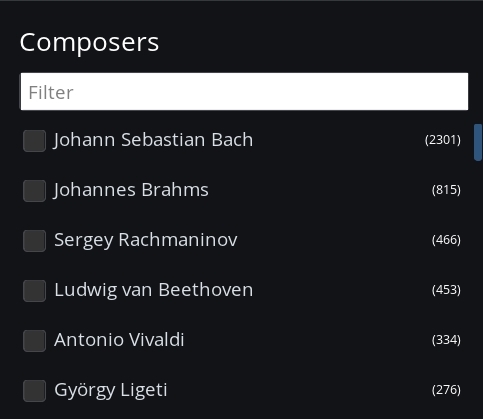 The same problem with Tchaikovsky

Appears in English and Russian Cyrillic.

Some albums assigned to one and some to the other

A search on the English one does not bring up the Russian versions.

This is not a bug. The Composer detail screen provides a list of works, not tracks. Classical works (and works in other genres) may consist of more than one track. Hence the discrepancy.

Go to Tracks>Focus>Composer to find what you are requesting.

It’s well understood that cyrillic names (and other problems) are getting into the Roon database on English-language machines via various sources. It often means that the metadata has come from a secondary source. It can also come from your file tags, so check them.

As there are often alternative versions in the Roon database, reidentify the album to make sure you have the best data. Failing that, the current work-around is to fall back on file tags and correct from there.

Can’t quite understand what you mean and have none of his work to check. What do you mean by “the composer is present”? Maybe he’s present but not in a composer tag, because of bad metadata?

Then allow me to be clear about Bug 3 (Composer Hovhaness). Screenshot of search. 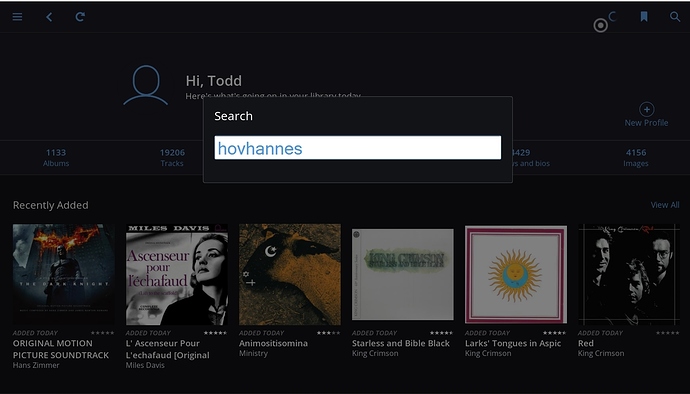 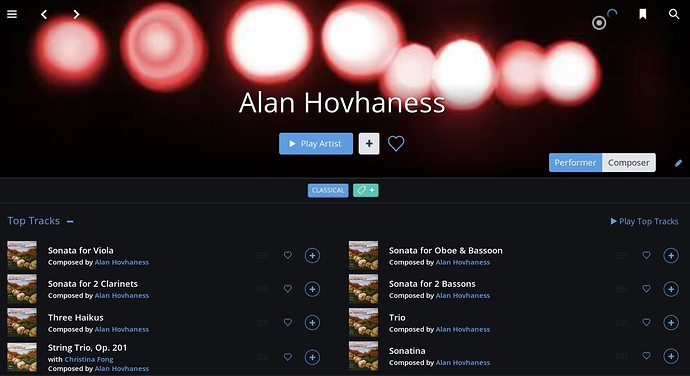 Hovhaness album present when clicking on the composer. 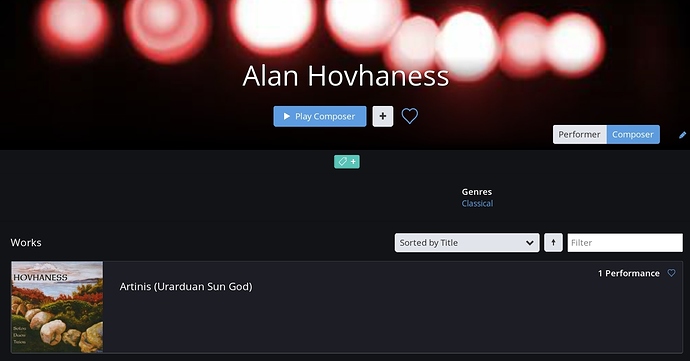 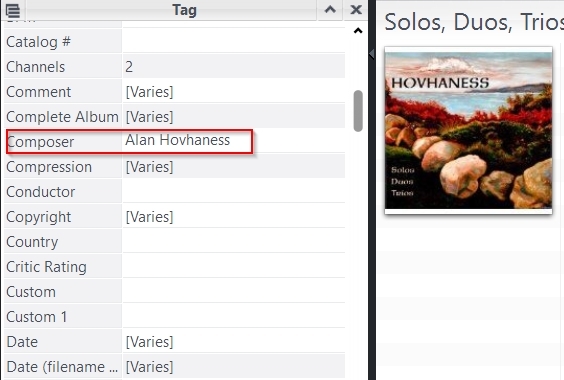 Try that search again. I think you spelled it wrong,

I’m not sure what you mean by file tags (the tags inside the file?) and what they can do to fix this problem. Sergey Rachmaninov (SR), to take an example, when spelled in Cyrillic, is totally disjoint from the English spelling entry. The albums are separate, the bio is as well. I cannot search Composers for the Cyrillic SR using an English keyboard. There’s no place I am aware of that I can override Roon’s notion of Composer. The only place to find Cyrillic SR is via the Focus->Composers and scrolling through the long list which is a bit of a chore given that the list is organized alphabetically but in multiple sections corresponding to the number of albums. Right now I have over 15 albums that are messed up, and there will be more as I add old CDs to Roon. Perhaps what’s needed is a “map to” entry for each composer, which would also solve the "Johann Sebastian Bach is really the same as Bach/J.S.Bach/Bach, J. S./… " problem for those of us whose tags don’t match exactly what Roon wants.

Adding a Green Tag to both English and Cyrillic SR albums and remembering that in this case, you don’t go to the Composers section, is not really workable in my opinion. It might be if SR were the only composer so afflicted but he’s not.

Agreed Richard Wolff, these types of metadata issues are a serious problem for classical end-users.

To the Roon team, kindly let us know if you are planning to address any of the composer metadata stuff brought up in these forums. I sincerely hope that you are able to find a way to solve these challenges sooner than later. Here are a couple of other items that are deal breakers, which I’ve previously posted:

Best of luck to the Roon team, wishing you the best in your journey towards a great, competitive product.