The page for a classical composition is buggy and badly designed.

One of my favourite compositions is Dvorak’s Stabat Mater.

When on the composition page for this work -

At the bottom of the page, after you scroll past the huge images/initials (many images are pixellated as they probably weren’t meant to be enlarged so much) you finally get to the recordings section. I think I am not the only one here who thinks that this should be shown a higher priority.

Finally, do the fonts have to be so big for the name? That along with the large pictures take up a lot of space. Especially on an iPhone and iPad. Screenshots below from Mac, iphone and ipad.

I’ve just given an example of one composition above, but I can see this happening with many more. For example, for the page for Mozart’s Requiem - of the top 6 conductors shown - 4 lead to a blank page - 1 of the 4 is an organist and 3 are chorus masters.

@brian @support If you have a moment, a comment would be appreciated. 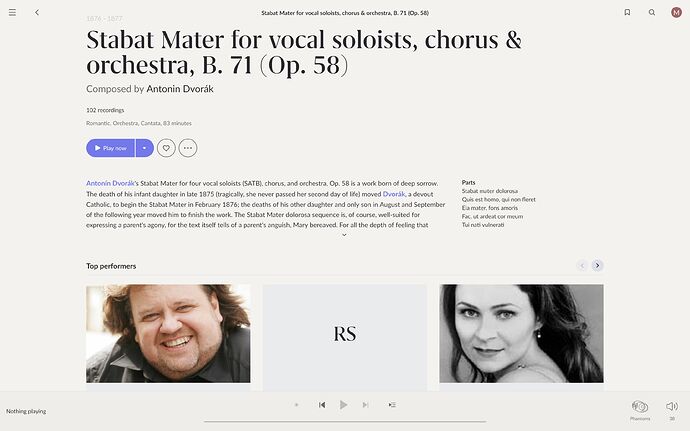 Or maybe it’s not that Roon is bad, but your library?

Or maybe it’s not that Roon is bad, but your library?

I’m not sure you’ve understood the issue at hand.

Roon suggests a popular condutor/performer - but then cannot produce any recordings by them. Nothing to do with my library

Yes there are a few grown up bugs and little buggies on this page.

Of course a „Top Performer“ (whatever that might be to start with) should have recorded that work, otherwise there is no point listing him there in the first place! Sometimes you get people responding that have little knowledge of the genre.

Your point is perfectly valid and has been raised by quite a few others.

The same with „Popular this-or-that“. Its all pretty arbitrary. There is another thread where people are getting composers listed for Opera, half of those actually being the Librettist and not the Composer. Again, not bad tagging but Roon just wrongly classifying Librettists as „Composers“.

So yep, some work to do there before this could become useful.