Classical / film score: how does that work?

I’ll take an example, but i’ve got many of them.
here we have a jazz drummer. don’t ask me why he is credited as classical (and sax instrument…) 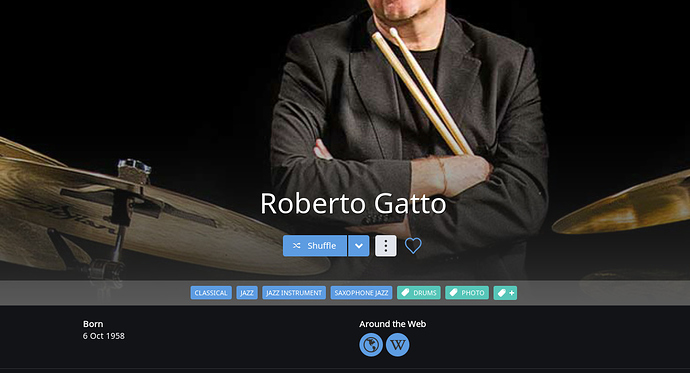 i try to remove the classical genre.

the result is this:

he is credited as FILM SCORE. that is a Classical subgenre. and if then i try to remove FILM SCORE, classical come out again.
so, poor Roberto Gatto is doomed to be a classical artist… WHY???

Nonsense behavior on genres
Why would an artist be listed under 'classical' genre when there is no metadata to define them as such?
Niccolo_Terzi (Niccolò Terzi) November 28, 2018, 10:47pm #2

image.jpg980×367 139 KB
they are credited as show/musical (don’t ask me why), a classical subgenre.
if i try to remove show/musical

he is credited as FILM SCORE. that is a Classical subgenre. and if then i try to remove FILM SCORE

Why is FILM SCORE a Classical subgenre.?

Can you verify how you are making these edits? Are you selecting the 3 dots directly from the artist page, then choosing Edit, or are you navigating to the edit screen elsewhere?

Have you done any edits previously to these artists?

I added an album for this artist, removed Classical and Film Score (they were both showing up for me right away) and then removed the genres and things are showing as expected, so it looks like something else is occurring here causing you to see this behavior.

Have you done editing to your genres in Roon?

don’t ask me… but that’s that. illogical.

hi @dylan. yes, three dots in artist page, then edit.
the only edits i have for both these artists are:
-adding a picture
-roon tags added

Thanks for the update @Niccolo_Terzi. We are investigating this further.

Can you provide any additional information about edits you’ve made to your Roon genres?

well… not really.
there are some (few) genre mappings, and some hidden genres: i mean, genres that were present in my file tags not corresponding to roon hierarchy, that i have decided to hide. like “progressive” or “live” (hidden) or “afro” mapped in “african traditions”.
i have quite a lot of “avant-garde”, which has been automatically mapped to “avant-garde” (correct) and not to “avant-garde music” (classical subgenre). and i have removed at artist and album level the roon genre “guitar virtuoso” that i find unbearable (why not piano, trumpet or pipa virtuoso??)

i’m not a genres maniac, so i did not really do anything about them. as far as i can see, nothing involving “classical” or classical subgenres.

i can say that looking in the classical family, i have found out some other artists with this strange behavior. there seem to be some interconnected genres FILM SCORE, CLASSICAL, BAND MUSIC, CHAMBER MUSIC, ORCHESTRAL, SHOW/MUSICAL: they are all classical subgenres. trying to remove all of them seems to be impossible. if for an artist some of them are present, removing them make the others appear, with the result that the artist is always considered classical.

hope these infos can give you some hints…
i’ll make just a couple of more examples:

apart from the incomprehensible behavior, my point is that if i select classical, i’m pretty sure i don’t want to listen to marilyn monroe, dee dee bridgewater or sonny rollins!
good luck

any news on this thread? @dylan?

It’s the composer, not the artist, that makes a composition count as ‘classical’. See also here:


Why soundtrack, musical and the such count as classical? I guess we have to ask TiVo/Rovi (allmusic.com) why.

Hi @dylan
are there any news on this problem?

i can add a piece of information.
if i focus on classical artists i get: 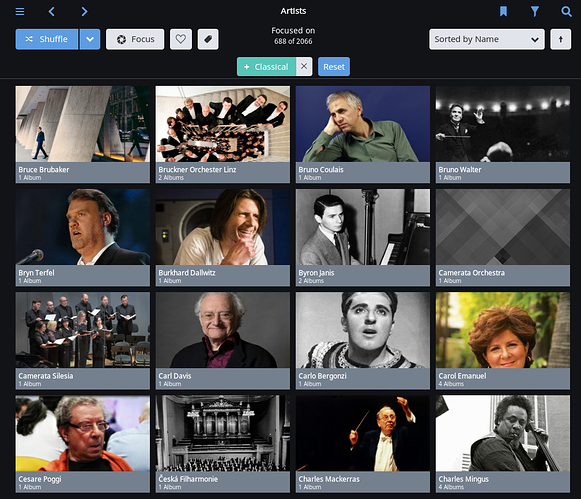 but mingus is not a classical artist:

if i inspect (edit) mingus i get: 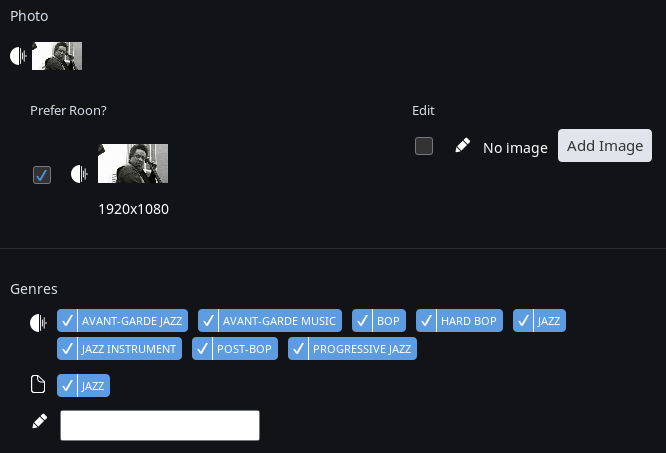 so no way to change mingus classification, he is doomed to be a classical artist.