15,000
Plus both QOBUZ and Tidal subscriptions are active.

There is a bug in the “Composer” display for classical music and it’s probably an easy fix.

If I search for a composer using “Focus”…I get some of the correct albums in my library (one of the albums in the “Composer” listing is missing in the Focus listing of Britten in the example below. This is an album where I manually added the composer to the “artists” metadata. I checked the metadata on this album and Britten was listed as a piano player and not the composer. I edited the metadata and included him as a composer.

If I search using “Tracks” I get the correct albums.

If I click on “Composers”, the display of albums in my library is never right. It only includes albums where the composer is included in “artists.” I checked one of the albums missing to see if the composer was blank, but it was correctly listed in the credits but not being picked up by “Composers.”

Seems the bug is “Composer” is looking in the wrong metadata location whereas “Focus” and “Tracks”
get it right. COmposer looks for the composer in artists and focus looks in “composer”

Here is an example for the composer Britten using Tracks, Composer, and Albums/Focus/Composers
Tracks is truncated, as the display had too many results to show easily. 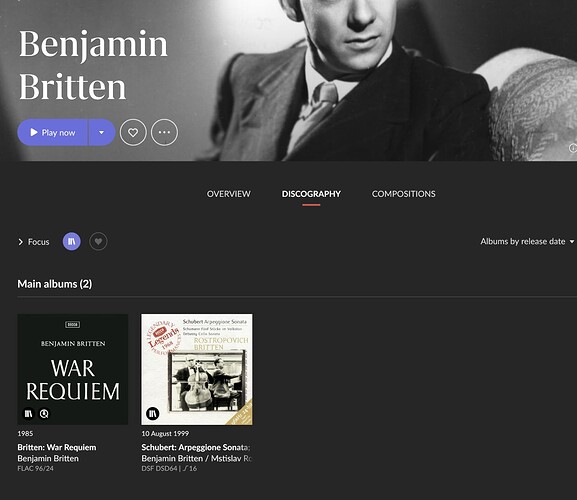 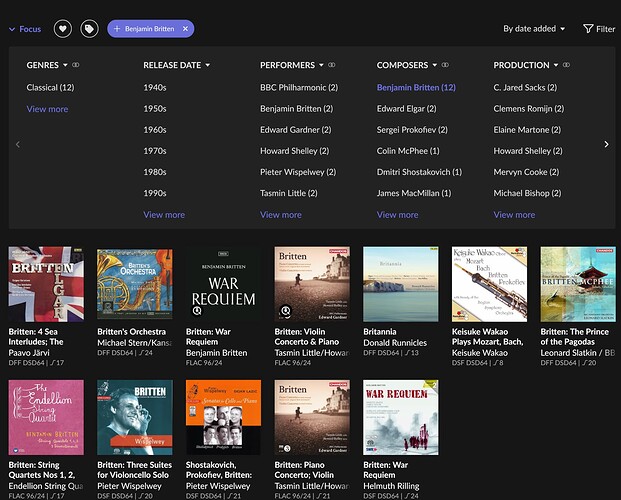 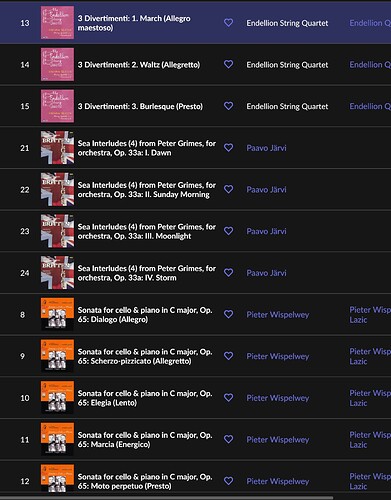 Do you expect to see all albums with compositions by a composer in the Discography tab of the Artist / Composer page?

I believe Discography is designed to show only performances in the sense of being directly involved in the productive process of (creating) the recording. At least that’s how I read the second paragraph from the Roon 1.8 FAQ here:

With a streaming service logged in Roon’s new Discography view gives you a detailed, sortable view of the artist’s entire career. This can include their work as a solo artist, composer, producer, band member, collaborator, and more, with powerful sorting options and Focus to help you find the key albums and the deep cuts.

Discography automatically shows you the highest-quality copy of every album or recording the artist has ever released. You can find other editions of each album under the Versions tab, or on the “Albums In Your Library” section of Overview.

If you want to see the albums in your library with compositions by a certain composer the Overview tab has a section Composed by showing this, I believe. At least that’s how it works for me without having a streaming service active.

If the composer, like Britten in your example, also is / was a performer you can switch between → Albums display which includes aforementioned Composed by section and → Recordings display; again: recording means the artist actually participated in the making of the recording (according to metadata) and not “recording of a composition”.

As your albums screenshot clearly shows: for most albums, Britten was not directly involved = no Discography entry by design.

This (discography) can include their work as a …composer !!!

I may be wrong, but I’m sure this was correct in the recent past. (Discography listed the albums composed by the composer). And discography seems to work fine for conductor, artists, etc all of whom are on the credits list as is the composer. So even if the composer is dead, whether the Beetles or Beethoven, the album should appear there.

Somehow, the Discography does list the composer’s albums for Qobuz, and Tidal, however. But when I click for My library, it is wrong. It excludes my albums. And compositions seems OK as well.

I think the software is looking in artists instead of credits (for composer).

Update: I just checked another composer and now my library albums are showing up again as they should be. And I checked the metadata and the composer is NOT listed in artists, by is listed as a composer. Did the latest Roon update change this?

Now it works again, as it has in the past.

Thanks Roon for fixing the bug