Also, it lists this album twice on the composition page

Why is this happening and how do I fix it?

Hi,
I loaded in Roon server the Sony 2012 release of this album from Tidal. After adding it to the Roon library, I identified it. At first sight Roon does not seem to hold data for this release. I matched the album with the first suggestion offered at top without album art : 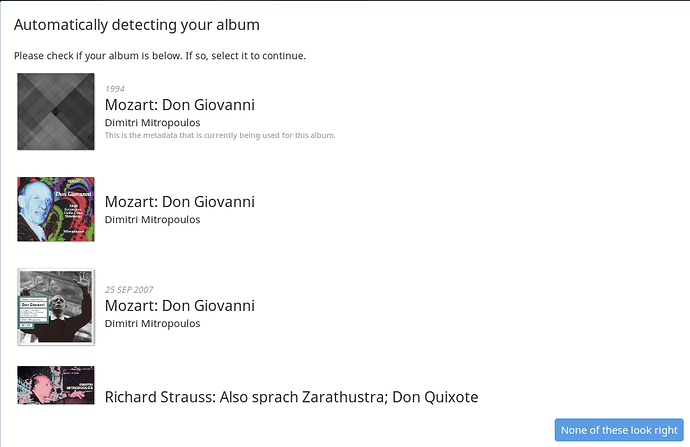 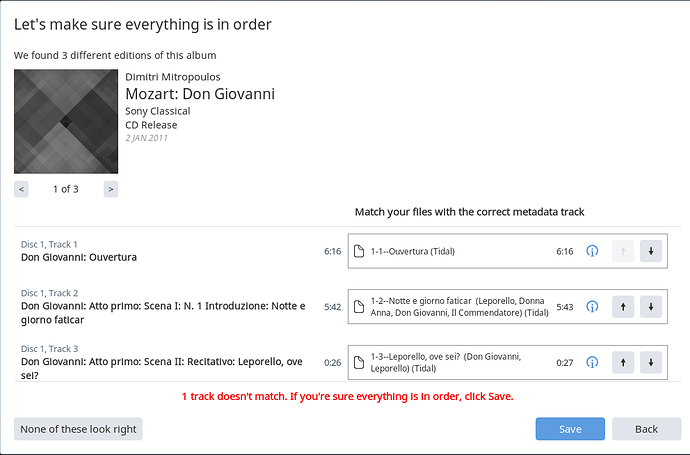 Capture2.PNG992×655 71 KB
Among the 3 editions found, the first one is the best fit (release date & track timings) and is likely the correct one, altough album art is unfortunately missing.
The album contents is shown as one composition, with the tracks properly grouped under work “Don Giovanni, opera, K. 527” :

I guess you are working from a local version of this album. You could try reidentifying the album using the match shown above. You should get similar results.

Let me know if this works for you.

I tried that and it gave me this 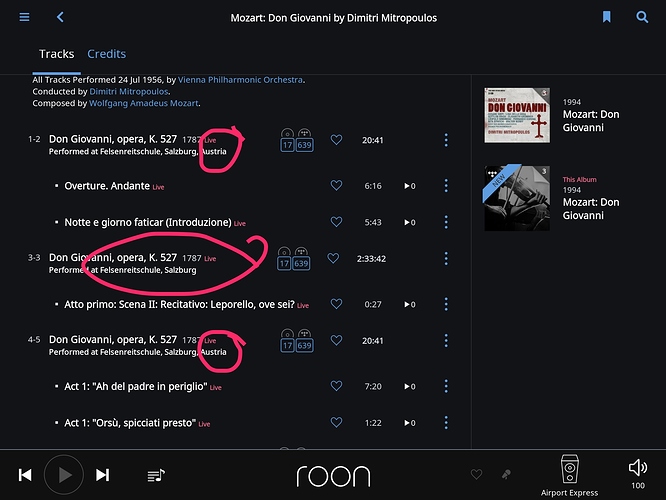 I noticed that the few tracks that are part of the other one have Austria in the performance location but the rest doesn’t. Could this be the problem. I can’t find how to edit that part out.

@Todd_Sevig Weird! It seems that you are not getting the same editions than I am. When you go Edit > Identify Album , do you select the first choice proposed by Roon (1994 Mozart: Don Giovanni) (refer to my 1st screenshot).? If so, are you offered the choice between 3 editions (see 2nd screenshot) and did you select the 1st one ? I am asking because, if I myself select the second editon insead of the first, I can see the reference to “Austria” in the recording venue : 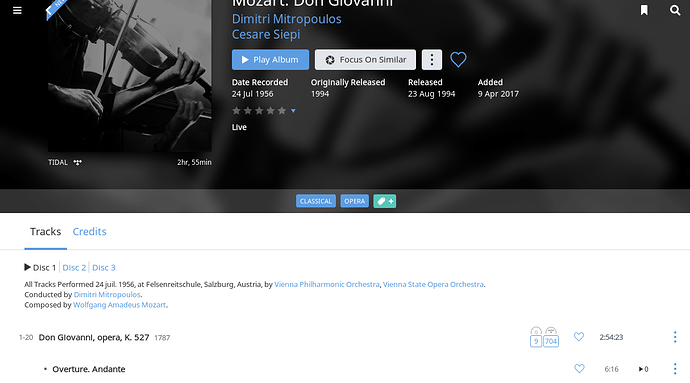 Finally, I apologize for what may appear to be a silly question : is your Roon installation up-to-date, and on what platform is your Roon core running ?

I would really like to explain what is going one.

Yes I did the same one. Core is iMac 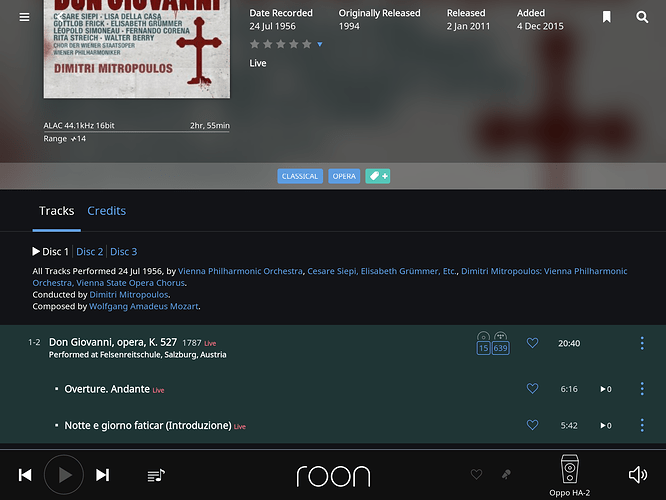 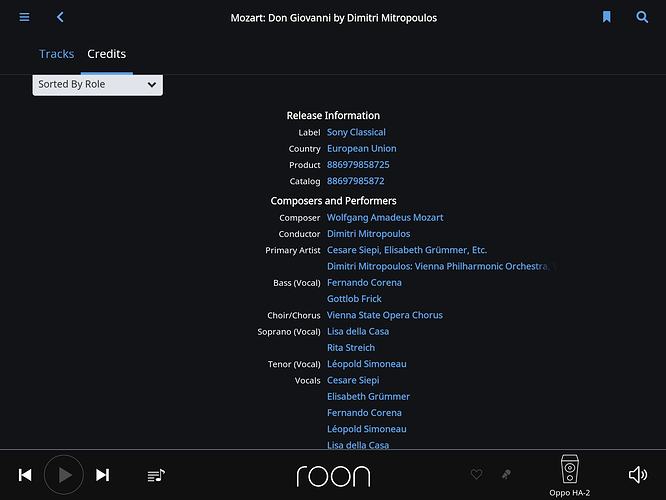 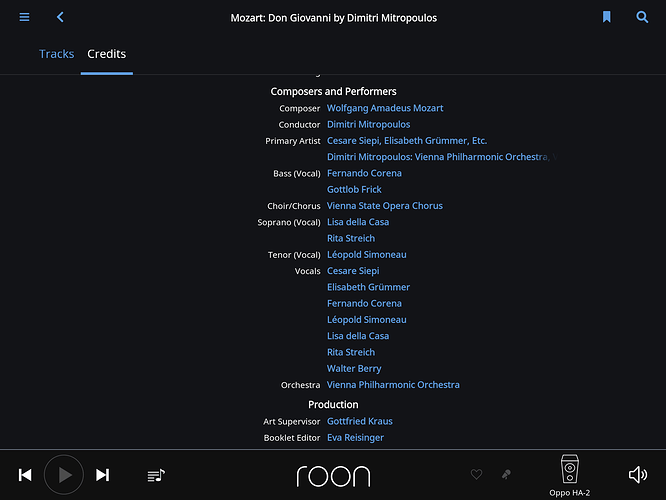 This is almost certainly down to the way that Rovi has assigned performance IDs to each of these tracks. If Rovi regards any track as an “excerpt” then it’s given a separate ID. It could be an error in the metadata, but I suspect someone has been quite pedantic.

Unfortunately, at the moment, there is little that you can do short of unidentifying the album and using file tag metadata to control the grouping. We are working on a scheme that will allow editing of works and performances (as we know that this aspect of the product is incomplete), but it’s not ready to be rolled out yet.

Long term, we are building a system with far more power and flexibility to correct these issues.

Had to re import it twice. The first time dbpoweramp tried to load metadata that was wrong so then I deleted those files and re imported it with no metadata at all and then identified it in roon and grabbed the artwork from amazon. The problem might have been that the metadata that came in automatically was different on each disc of the 3 disc set.

This issue occurs quite a lot in my library. Any news on the long term solution?

Long term, we are building a system with far more power and flexibility to correct these issues.

I just read through the thread and thought to myself. Oh wow, this is being worked on and fixed! But then I saw the date of the post - April 2017. So that burst my little bubble.

Maybe then you would realize how important these issues are.
Roon could be phenomenal for classical music, which has had it difficult in digital ages, since Metadata / Tags were invented (with only modern music in mind)
So if you have truly been working at this for years, come on release the fix - don’t be shy

We are working on a scheme that will allow editing of works and performances (as we know that this aspect of the product is incomplete), but it’s not ready to be rolled out yet.

This was written two years ago. Am I right in assuming that the scheme @joel mentions would make it possible to combine all of the parts of a composition into one composition WITHOUT adding WORK and PART tags? If so, then I really can’t wait for this solution to be rolled out! There are literally thousands of tracks in my collection that are waiting to be grouped!
See also my recent post here: Classical album contains grouped tracks in one composition as well as ungrouped tracks