I’m pretty happy with the new release but it seems classical is still a second class citizen. Search does not return most of my Mozart as an example: 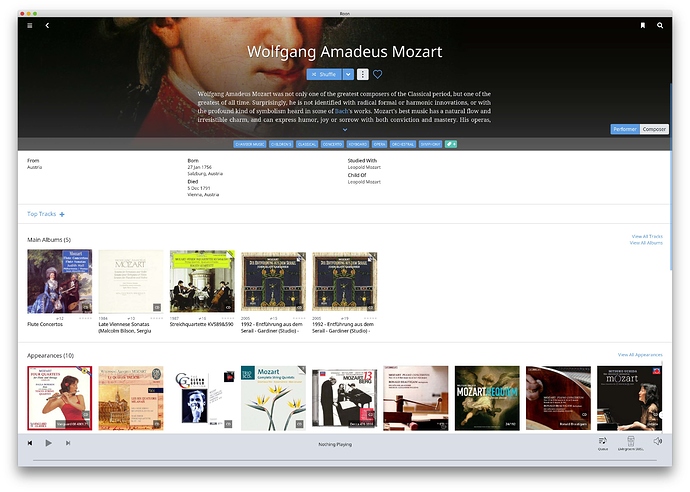 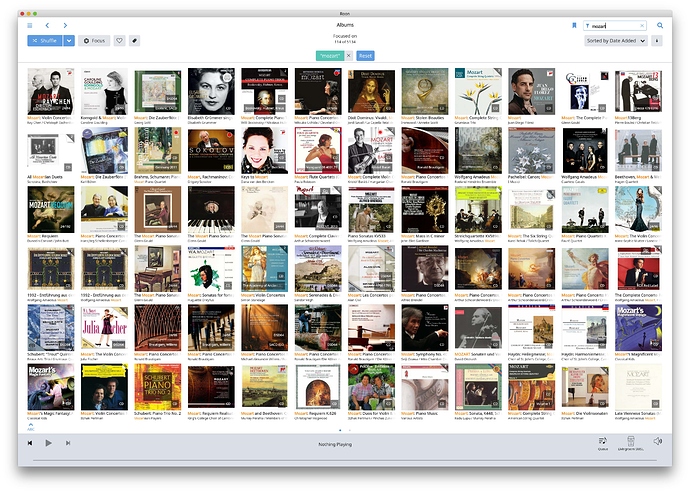 Most of the albums are identified…

Hi, you need to change over to Composer view on the right - you selected Mozart as a performer, which would be a bit difficult since the poor guy died before the recording industry took over 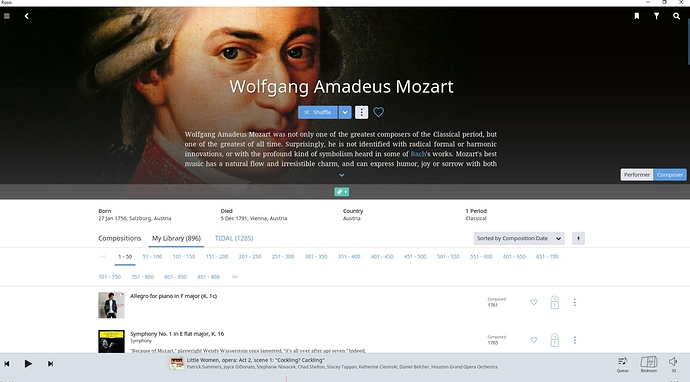 This is what comes up on my collection. But I must say, I would really prefer all albums to be shown and not about 900 single works - this makes this function pretty useless for me.
In other words a view as in performer would be greatly preferrred by me.

There is a (fairly) easy way to get rid of this Composer as Artist phenomenon. Select all the offending tracks Edit/Credits, and delete Mozart as Primary Artist (primarily because he isn’t).

Sometimes they pop up as a performer because of credits like… 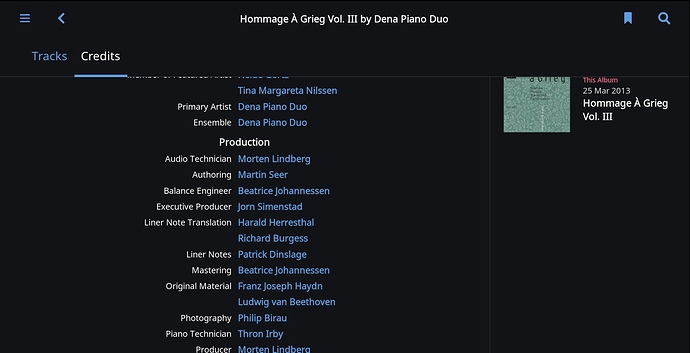 Why does original material makes them a performer though?

They have said they are still working on something for the classical fans, but it did not make this release.

You referring to Beethoven and Haydn?

Because in the roon “role” hierarchy, “Original Material” is a Production (i.e. non-Composer) credit. Another example is Orchestrator and variations on Arranger which are Composer credits but variations on Transcription are Production credits.

There are many other oddities in the role hierarchy which repeatedly filter through to unexpected (for me anyway) behaviors which end up needing an editing step. For example, variations on a “Choir Director” is considered a conductor, but variations on a “Chorus Master” are considered a performer. This will effect who appears on the “conductor” line on the main album screen. Very annoying if you like vocal music and your basic navigation anchor is the choir/chorus direction in the same way others might use orchestral/ensemble direction.

Not really sure, but my guess is a track that is a transcription of, or variations on, original pieces by this composer.

But all the major databases have adopted the Composer = Artist artificial linkage, so one has to stamp it out by hand, I’m afraid.

In addition, roon equates a further 35 roles with the category of composer (not just artist). I do not know where that convention comes from. But it is clearly stated in the Roon knowledge base. As it happens roon associates the role of Original Material along with Transcription to the category of Production along with Accountant, Administrative Assistant and Assistant Hairstylist and more than 1,000 other roles (much more, I just gave up counting)

In GENERAL the classical search is better these days, but who’s at fault for something like this: I was searching for a Naxos album of Virgil Thomson’s The Plow That Broke the Plains and The River in performances conducted by Angel Gil-Ordonez. I searched under Virgil Thomson, first under his “discography” then just as a keyword search under “The Plow that Broke the Plains”. Nothing. I couldn’t remember the name of the conductor, but did an internet search and found his name. Only then, searching under his name, did the album turn up with the very unhelpful moniker of “Musique de Film”. Why does this not show up with a keyword search for the work(s)? The really odd thing is once I found it via the conductor’s discography and ADDED it to my favorites, NOW it shows up under a keyword search for the composition’s name! What is doubly annoying that Roon had so much trouble finding this is that a keyword search on the Qobuz app pulls it right up. Don’t know if the having Tidal would have made this easier, but I dropped Tidal a while back.